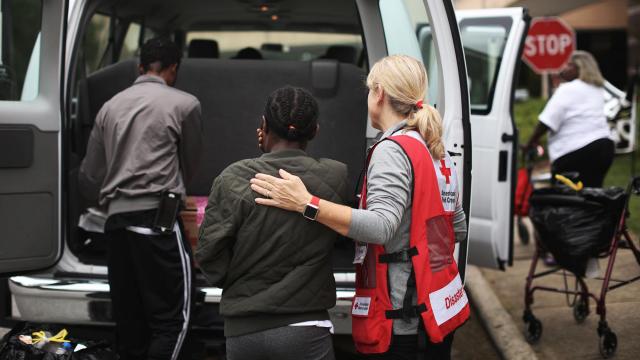 CHAPEL HILL, N.C. — Felicia Brewington has not seen even a cellphone picture of her home in Lumberton, one of North Carolina’s flooded cities. She does not know just how high the waters rose during Hurricane Florence, or whether the house was damaged, or whether her family will have anywhere to stay once they finally make the 126-mile drive back.

It’s been that way — waiting and worrying — for about two weeks, since she and her family fled the looming storm.

“You feel helpless, in a sense, and you feel like you’re imposing,” Brewington said Tuesday afternoon at an American Red Cross shelter at the University of North Carolina at Chapel Hill. “You just want to get back home.”

With Florence still wreaking slow-motion havoc long after its winds dwindled away, Brewington and thousands of other evacuees across the Carolinas are in an exhausting, dispiriting limbo — a sad staple of most natural disasters but with a pace that seems particularly cruel this time.

Since it made landfall Sept. 14, the storm and its aftermath have been blamed for at least 45 deaths in the Carolinas, and about 1,800 people remain in shelters at schools, recreation centers and National Guard armories. Uncounted thousands more evacuees are staying with relatives or friends, or have crowded into hotels, while their homes molder, insurance adjusters crisscross the region and, in some downstream communities, the floodwaters rise again.

Near Conway, South Carolina, the Waccamaw River is expected to crest at 21.2 feet, at least 3 feet higher than its previous record, on Wednesday afternoon. Just to the southwest, the Pee Dee River near Bucksport has topped its previous record by more than 2 feet. And to the southeast, the authorities in Georgetown County, South Carolina, urged about 8,000 people — roughly one-eighth of the county’s population — to leave their homes for a second time, with high water approaching from upriver rather than from the sea.

“It’s almost like we have a silent assassin coming our way,” Mayor Brendon arber Sr. of Georgetown, the county seat, said Wednesday, with the city’s boarded-up businesses all but abandoned in anticipation of flooding.

And so the shelters have remained busy, housing people like the Brewington family who escaped before the storm, and others in the more defiant mold of Bobby Ballew, who stayed in his Conway home until his wife, Deborah Ballew, persuaded him to go with rescuers who had come to their front door in a boat.

“The toughest part is waking up,” Ballew said at a shelter where 17 people slept Tuesday night. “You get maybe a couple of hours of sleep, and then you wake up, and you cry again.” The days away from normal life start to run together. There may be fleeting moments of relief: Cheerleaders and basketball players from UNC have paid morale-boosting visits to the shelter where the Brewingtons are staying. But the hours and days are more often clouded by daunting choices about how to live among strangers.

Christina Palozzolo, who evacuated from a three-bedroom house in Conway last week, said she and her partner, David Andrew Bell, were grateful for the food, support and air-conditioning they found at a recreation center-turned-shelter. But she has spent many hours feeling lonely and uncomfortable, especially when Bell is at work at a beverage bottling warehouse. Unsettling as the situation is, she said she drew some comfort from the fact that her children have been able to stay with their grandmother, squeezed into her tiny apartment (one child sleeps in a closet), rather than at the shelter.

“They wish they could be with us, but it’s a lot of work to have kids in a place like this, to keep them under control and have the people here not get mad and upset at them,” Palozzolo said.

South Carolina’s river flooding is expected to last through the week in some areas, extending the need for shelter beds there. But in North Carolina, where the shelter census stood at some 20,000 people at the height of the crisis, federal and state officials, as well as nonprofit groups like the Red Cross, expect to close shelters more quickly, as evacuees return home or receive disaster assistance. Officials said it was likely that some of the people still in the shelters were homeless before the storm. Mental health experts say that a shelter stay of a week or two might not do evacuees any lasting harm, but that being displaced from their homes for lengthy periods could leave them with increased unease about school, work, personal relationships and economic well-being.

“What we know is that when people are displaced, anxiety and stress is much higher,” said Robin Gurwitch, a psychologist and professor at Duke University School of Medicine, where she researches the consequences of trauma and natural disasters on children and families. “The longer it takes for the routines and normalcy and getting back to what I used to be doing, the more at risk families are,” Gurwitch said.

She noted that major shelters often offer counseling for evacuees, and that providing other services like assistance with child care can help evacuees endure the initial aftermath of a disaster like Hurricane Florence.

“The good news is that after these kinds of disasters, the majority of people actually do well,” she said. “But that doesn’t mean that we don’t need to support them.”

People at shelters in the Carolinas said this week that they recognized the obstacles ahead. Some said, usually with a knowing smile, that they preferred the cots and relative calm of a shelter to the tears and troubles awaiting them back home in Trenton or Fayetteville.

“Life gives you a lemon, you make lemonade,” said Gary Keys, a 54-year-old butcher who reluctantly prepared to leave the shelter in Chapel Hill on Tuesday to return to Jones County, where flooding has largely abated. “I’m looking forward to going home, but I don’t want to leave.”

Even on a sunny, humid day in Chapel Hill, the storm was a perpetual scourge for Brewington, her husband and their four young children. Scarred by a difficult evacuation during Hurricane Matthew in 2016, the family left Lumberton ahead of Florence on Sept. 12, bound for an extended-stay hotel in Raleigh. Driving to the state capital in their Pontiac Montana minivan, they did not realize how long the storm would stick around.

“We hadn’t anticipated not being able to get back,” Brewington said.

Last week, with roads closed and the hotel bill climbing beyond what they had planned for, Brewington searched online for a phone number for the Red Cross. The group referred the family to the shelter at UNC, where they have slept every night since.

“We knew we couldn’t afford the hotel any more, we knew we couldn’t go home and we knew we can’t sleep in a van with our four kids,” she said as she watched her children fill in coloring books at the shelter, just down the hall from a whiteboard of taped flyers with titles like “Disaster Survivor Application Checklist” and “Tips for Contacting Loved Ones.”

At its busiest, the shelter housed 486 evacuees, but most of them have since been able to return home or to some other kind of housing; by Tuesday afternoon there were 45 left, including the Brewington family. Another 24 had just left on two Jones County school buses and in a white van from the Civil Air Patrol.

“You feel happy for them,” Brewington said, “but at the same time, you feel envious, and you wonder if you’re ever going to get home.”

The family was planning to try Thursday, 15 days after they left.