Sanford, N.C. — At least five water rescues were reported in Lee and Moore counties on Wednesday and flooding was a major concern across the area.

A flooded Sanford road was closed Wednesday morning while crews rescued a woman trapped in her car. According to officials with the Sanford Fire Department, the woman was pulled from her car on N. Plank Road near Highway 421. Officials say she drove into floodwaters, which completely submerged her car.

The woman was rescued and is okay. N. Plank Road remains closed between Carbonton Road and NC-421 due to flooding from the Deep River.

According to the Northwest Pocket Fire Department Chief, crews performed another water rescue overnight when a man drove into the floodwaters.

He too was uninjured. 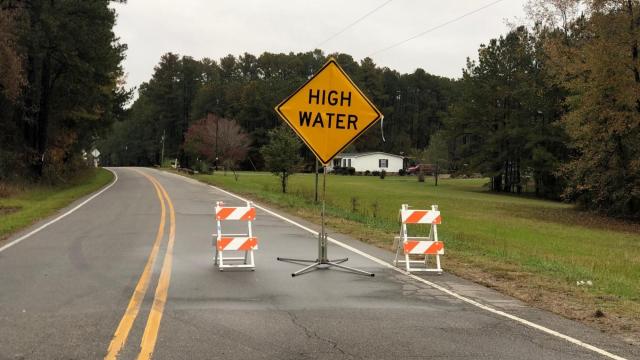 The chief said water on the road is at least 10 feet deep and could be as deep as 20 feet. Barricades were blocking the flooded road, but officials did not confirm that the man or woman drove around them.

In Chatham County, several roads are flooded, including:

No water rescues had been reported in Chatham County, but Sky 5 video showed dangerous water levels, roads that ended in ponds and submerged structures.

The Deep River along the Lee-Chatham County line was fast moving as the water continued to rise Wednesday night. The river was already at 10 feet late Wednesday and is expected to rise as more rain falls through Thursday.

The latest rescue was at Morrison Bridge Road when a man tried to drive through floodwaters. Crews said he was rescued and is okay, but the water was so high it came up to his seat.

Earlier Wednesday, crews rescued two SUVs that got stuck on McGill Road because of floodwaters. The cars were still stranded at 10 a.m.

Firefighters told WRAL the water in Moore and Lee counties is starting to recede.

People along the Cape Fear River in Cumberland County were still drying out from Hurricane Florence and Michael.

Charles Gardner recently purchased an amphitheater along the Cape Fear River, but it was under water for the second time and he's yet to put on a show.

"I still have high hopes for it," he said. "It's beautiful property. Great views of the river. The high bank right here is a great area to have all types of activities."

Vicky Williams, who lives nearby the river on Deep Creek Road said water had risen into her backyard.