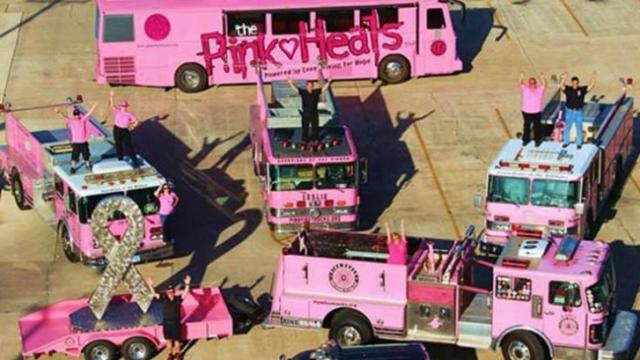 Many a young kid loves to see a single fire truck. Imagine their reaction when they see a fleet of them and all in pink.

On Monday, a fleet of pink fire trucks and police vehicles will stop at Rex Hospital to raise awareness of breast cancer and women's health.

The Pink Heals Tour, a nationwide tour, will be at the Raleigh hospital from 10 a.m. to 2 p.m., Monday, at the Rex Hospital Patient Tower Entrance, 4420 Lake Boone Trail.

I share this because I know some kids would love to see all of the big pink vehicles, but also because they'll have some important information about breast cancer and women's health issues.

Breast cancer survivors are encouraged to sign the pink trucks. Attendees also can sign in honor or memory of a loved one. There also will be a food truck rodeo.

Raleigh firefighter Robert Harper led the effort to bring the Pink Heals Tour to Raleigh, a press release says. Harper's wife passed away from breast cancer earlier this year. She was treated at Rex. Harper believes the event will honor her memory, the release says.

The tour, a national nonprofit, is run by volunteers and supported by the sale of pink T-shirts and other items.

On Tuesday, the fleet heads over to Chapel Hill for a parade down Franklin Street with some of the town's Carolina blue fire trucks and a display at 140 West Plaza. The parade begins at noon and moves across Carolina's campus and down Franklin Street. It stops at 140 West Franklin at 12:30 p.m. It them moves across town at 2 p.m. to Ram's Plaza where there will be a display from 2:30 p.m. to 6 p.m.