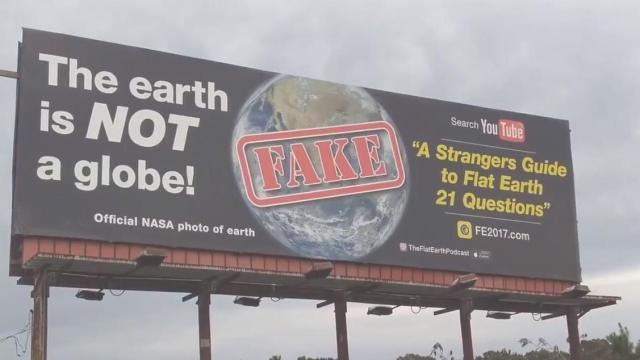 A lot of people, including celebrities like NBA player Kyrie Irving and Tila Tequila, have publicly said in the past that they think our planet is as flat, and attendees at a conference held this week in Cary apparently agree. The Flat Earth International Conference put on a sold-out a meeting Nov. 9-10 at the Embassy Suites in Cary.

According to the group's website, registration fees to attend the conference ranged from $27 (for online streaming) all the way up to $249 for a VIP package. Several attendees apparently drove campers to the event and parked them in the hotel parking lot while the conference was underway.

Convention organizers paid for a billboard advertisement that was erected in late October along Route 401.

The group of people who believe the Earth is flat has gained momentum in recent years and been the subject of social media feuds and several national news reports.

The convention in Cary was set to feature 14 speakers and include exhibitions and panel discussions about topics that included: NASA and other space lies; Flat Earth with the scientific method; and waking up to mainstream science lies.