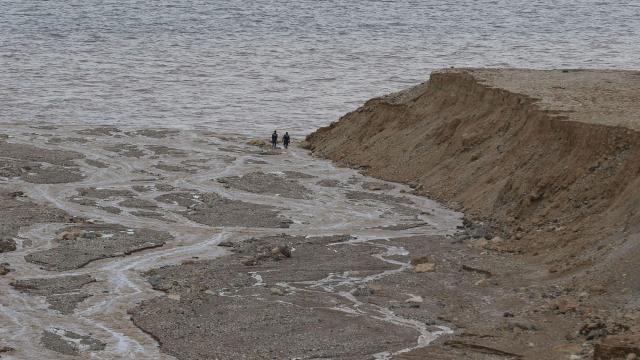 Heavy downpours triggered the floods, forcing more than 3,500 international and domestic tourists to be evacuated from the tourist city of Petra in southern Jordan, according to Jumana Ghuneimat, Jordan's minister of state for media affairs and government spokeswoman.

Ongoing rainfall in the Daba'a region of southern Jordan also led to the closure of the desert highway in both directions, said Ghuneimat. Vehicles were left stranded as the highway flooded and traffic trapped those attempting to leave.

In the Mlaih district of the Madaba governorate, where a young girl was killed when her family's car was swept away by floodwaters, rescue teams and divers were on the scene searching for other missing people, Jordan's official Petra news agency reported. Workers were also trying to restore electricity to communities where rainfall caused generators to malfunction, resulting in blackouts.

Rescue operations continue across Jordan. So far, 60 people have been rescued and nine transferred to al-Nadeem hospital in Madaba, Ghuneimat said. Authorities have also deployed a drone to search flooded areas for missing people and gauge damage caused by the storm.

As search and rescue operations continue, Ghuneimat advised the public to exercise extreme caution and to deal with the weather conditions in a "very serious manner."

She said the Petra Development and Tourism Region Authority activated early warning systems by using speakers and mosques to warn about the weather conditions and the importance of moving away from flooding areas.

Hassan Al-Qaiam, governor of Madaba, said the Mlaih area has not experienced extreme flooding in many years, according to the Petra news agency.

The flooding comes two weeks after 21 people -- most of them schoolchildren on a field trip -- lost their lives in flash floods. The incident angered many Jordanians and led to the resignation of two government officials,the minister of tourism and the minister of education.