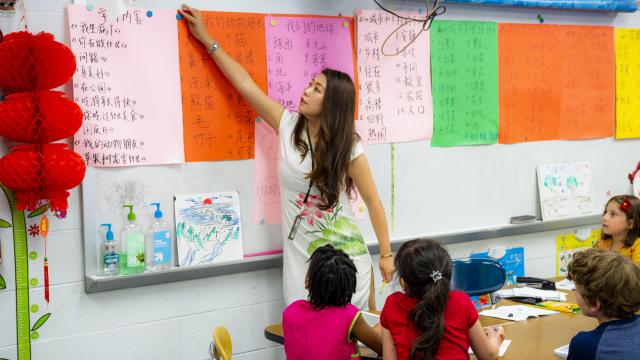 This article was written for our sponsor, Participate Learning.

While learning a new language can be challenging at any age, studies have shown the earlier a person learns a new language, the easier it will be. Additionally, research shows bilingual people have an easier time with several key brain functions such as reading comprehension, understanding math concepts and using logic.

Studies show teaching young children how to speak a second language is good for their minds.

"Cognitive advantages follow from becoming bilingual," said Barbara Lust, a developmental psychology and linguistics expert and professor of human development, in a Cornell Chronicle article. Lust is also the director of the Cornell Language Acquisition Lab. "These cognitive advantages can contribute to a child's future academic success."

The part of the brain in charge of language learning is the same part of the brain used to perform other tasks and research shows bilingual people have an easier time with key brain functions such as increased reading comprehension, logic, focusing and making decisions. Research also reveals students in dual language programs consistently outperform monolingual peers on state-mandated tests, regardless of demographic.

"We find that children learning a second language in an immersion setting show an overall success rate of grammatical knowledge similar to English monolinguals," added Sujin Yang, a former postdoctoral research associate at the lab in the same Cornell article.

Yang also believes the best way to learn a language is to be constantly surrounded by it.

This is exactly what global education company Participate Learning does through its language acquisition and immersion programs, which bring dual language curriculum and international educators into schools to help students become bilingual.

"I enrolled my daughter in the immersion program without really knowing much about it and now that she's in a dual language program, I have realized how great it is," said Colby Cooper, a parent of a child in the Mandarin Immersion program at Stough Elementary in Wake County. "My daughter is in second grade and has really excelled in this learning environment."

Rocio Evans, a senior instructional specialist at Participate Learning who teaches Spanish, said she sees her students making constant connections throughout the day that boost their learning in areas beyond language.

Language learners like Cooper's daughter, also seem to have their curiosity peaked and tend to be more engaged in other academic areas as well.

"I can see her interest, not just in Mandarin, but in language in general," said Cooper. "When she hears another language, she wants to know more about it. When she hears something in Spanish, she'll want to know about the pronunciation and what it means. I see that interest in language expanding beyond just what she's learning for her specific program."

As technology advances and the world becomes increasingly more connected, it's no surprise those who speak more than one language are enticing candidates for college admissions and jobs. In fact, the U.S. Department of Labor estimates there will be a 42 percent rise in demand for interpreters and translators over the next decade. Knowing a second language makes your resume stand out and can pave the way for more opportunities.

Bi and trilingual students tend to be more competitive college and job applicants as they are able to communicate with more people and broaden their horizons. Additionally, research compiled from Participate Learning stated bilingual adults have several advantages over monolingual adults, including higher average salaries and greater career opportunities.

Evans said some of her students who she taught a second language to are now studying at some of the best colleges and universities in the country thanks to their mastery of a second language.

"Speaking two languages has opened up a set of opportunities that I probably wouldn't have had if I didn't know another language. Being bilingual has opened doors for me to be able to be where I'm at in my career. In the workforce, I've also seen it with our students," said Evans who is a product of a dual language program in her native country of Honduras. "Our first cohort of graduates of the program I taught are already getting into colleges and earning Spanish credits because their competency of another language is impressive."

Participate Learning puts an emphasis on global learning that goes beyond verb conjugation and new vocabulary. Learning a new language, but also learning about the place where people speak the language natively opens young eyes to countries and cultures outside of their own.

By bringing in teaching ambassadors from foreign countries to teach students a second language and implementing initiatives where students write to international pen pals, for example, Participate Learning is able to cultivate cultural awareness in its language learners.

"In rural areas in particular, students lack exposure. With a global education, they're able to be exposed to the world beyond their environment. Through virtual trips and cultural immersion, they're building respect for other cultures," said Evans. "That global piece is so important. Language is part of that global education. But learning about French history for example, enhances your language learning experience."

Evans said teaching a language breeds interest in her students about a country's culture and instead of feeling closed off from something foreign, they embrace it.

"They're always kind of looking at maps and thinking about places they want to go to. They have more of a worldly view than I probably ever did," she said.

"When I went to school in the late eighties and early nineties, we weren't introduced to language until middle or high school, and it was more conversation based," said Cooper. "At my daughter's school, she's learning more than just how to speak, read and write Mandarin — there's a big emphasis on the culture. The school as a whole, there's a focus on the world beyond the United States. I think learning and being immersed in a language and a culture at a young age is something that I think in the long run helps create more empathy and compassion for people who are not like you."

Studies reveal "a multilingual brain is quicker, nimbler and more resistant to Alzheimer's and other forms of dementia." But learning a new language can also do wonders for a child's mental health.

Evans relayed an experience of a student who was behind in reading (in English) but did very well learning and speaking Spanish. She said this gave the student a confidence boost and a sense of pride, even though she was struggling in other academic areas.

Teachers like Evans see problem solving skills at work in the classroom — and it's not just students trying to figure out how to string foreign words together to make a cohesive sentence.

"They're more prone to look at patterns and identify things without you giving them a formula," she said.

"Confidence of learning a new language helps to improve students' communication skills, both in their new language and their native one. Through re-learning how to express themselves, they improve their ability to communicate clearly. The nature of dual language classes also ensures that students gain confidence in public speaking, regardless of which language they are using," stated the Participate Learning website. "By combining confidence, self-esteem and a strong sense of identity, English Language Learners often feel empowered to take on leadership roles in the classroom. They become engaged and active participants in discussions. They also gain a sense of shared responsibility with their fellow students."

"I think in 10 years, if you don't speak two languages, you're going to be at an even more noticeable disadvantage because you're not going to be able to connect to the rest of the world," said Evans. "Any language really just opens up a door. It gives you awareness and a way to communicate with more people. I love that. I love that it's making us more connected."

This article was written for our sponsor, Participate Learning.