Fistfights and Long Lines on Black Friday? Not as Much Anymore. 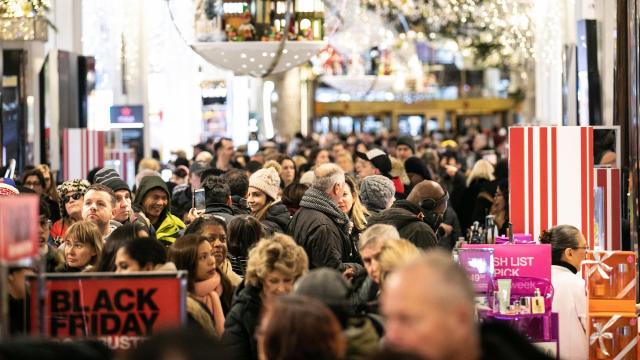 Black Friday has long been, and will most likely remain, the busiest shopping day of the year.

But the features that have made it a cultural phenomenon — the discounted electronics, the predawn openings, the curbside campsites, the incivility — are changing with the broader retail landscape.

Shoppers can now find bargains well before and long after Black Friday, and some deals are explicitly intended to draw spending away from the main event. The retail bonanza is increasingly met with indifference or disapproval by Americans who want to spend time with their families, sleep in and give underpaid retail employees a break. Foot traffic into stores on Black Friday is slipping while e-commerce claims a growing portion of the sales.

Here is a look at Black Friday, past and present.

Many of the retailers that drew the longest lines on Black Fridays past are now gone, shut down by corporate parents crushed by debt or forsaken by customers migrating online. Retailers closed nearly 8,000 stores in 2017, a record high, according to UBS. Toys R Us shuttered all its stores this summer. Sears filed for bankruptcy in October.

The Sears at the Great Lakes Mall in Mentor, Ohio, which in 2011 attracted shoppers eager for deals, closed last year and has yet to be replaced. In 2016, the mall installed Amazon lockers, where shoppers can pick up and return products bought online.

Big-ticket items take a back seat (until Cyber Monday)

Sylvia Herfeldt started hitting Black Friday sales once she learned to drive. In 2010, she waited in line for hours with her brother Daniel to spend roughly $400 on a 42-inch Insignia flat-screen television at a Best Buy in Fort Worth, Texas. Their sister and some friends were dispatched to other stores. The Herfeldts eventually sold the television and replaced it with a 50-inch LG television that they bought for $350 three years ago, also at Best Buy, also on Black Friday.

Both siblings have since lost interest in the shopping extravaganza. Daniel Herfeldt, who lives in Denton, Texas, said he might “wait until the very end, when everyone’s calmed down” to see if any discounted clothes, movies or video games are still available; major purchases can wait, he said. Sylvia Herfeldt said she planned to spend time with her boyfriend’s family in Orlando, Florida, while eagerly awaiting Cyber Monday. “Amazon is like my best friend,” she said.

Swapping the front of the line for free shipping

Staking a claim on the first spot in a Black Friday line, often weeks in advance, was often considered a point of pride. Days before the shopping event in 2011, shoppers waited on lawn chairs and in tents outside a Best Buy in Mesquite, Texas.

But the psychological drivers that once compelled shoppers to shiver in the dark for hours seem to be less and less effective. One recent survey of more than 2,000 people found that nearly 60 percent planned to skip in-person Black Friday shopping this year.

Instead, a majority of consumers plan to take advantage of free shipping deals. Others will opt for outdoor activities, prompted by discount admission offers from park organizations and REI’s 3-year-old anti-Black Friday marketing campaign.

Enthusiasm for Black Friday has boiled over into rage when waits have been long and parking spots scarce. Brawls have broken out in California, Texas, Pennsylvania and elsewhere, involving fists, pepper spray, stun guns and more. A dispute over line-cutting outside a busy Target in Bowling Green, Kentucky, in 2012 quickly escalated into shoves and screams.

Passions still flare in stores, but Black Friday has become increasingly sedate as it stretches into Black November and shoppers find deals online through events like Amazon’s Prime Day and Cyber Monday. Walmart, Target and other retailers are also trying to keep customer frustration under control by equipping employees with mobile checkout technology, uploading store maps to their apps and offering shoppers free coffee and snacks this year.

Sometimes, Black Friday outings are deadly. Shoppers have been pummeled, shot and stabbed. At the Green Acres Mall in Valley Stream, New York, in 2008, thousands of antsy shoppers shattered the sliding glass doors at a Walmart store and stampeded inside, injuring 11 people and fatally trampling a worker, Jdimytai Damour. In a settlement the following year, Walmart agreed to pay nearly $2 million, avoiding criminal charges.

Since then, Walmart has worked with crowd management experts and local law enforcement to keep shoppers safe, it said. Retailers have also learned to temper customers’ fear of losing out. “The chaos was being caused by the frenzy of trying to get to limited supplies and the great unknown of what was going to be inside the store,” said Marshal Cohen, a retail analyst with the NPD Group. “Retailers never really tipped you off to what was going to be inside, but nowadays, you can find out even a month in advance.”