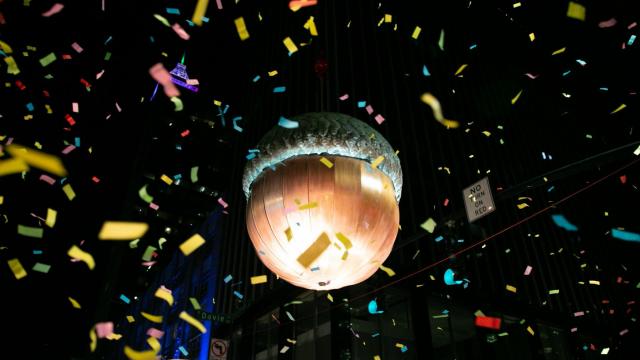 Raleigh, N.C. — All events sponsored by Raleigh will be canceled through at least the end of the year because of the coronavirus pandemic, city officials said Tuesday.

Raleigh already had called off all events through the end of October, and Derrick Remer, the director of the city's Office of Emergency Management and Special Events, said staff wanted to provide a decision for events in the final quarter of the year by Sept. 1.

First Night Raleigh, the New Year's Eve celebration that brings thousands of people downtown for rides, games, food and the Acorn Drop at midnight, is the most notable casualty of the city's decision.

Other events that will be called off include the annual tree lighting ceremony, a downtown food truck rodeo and the Jingle Bell Run fundraiser for the Arthritis Foundation.

Mayor Mary-Ann Baldwin said First Night organizers are working on a drive-thru or virtual event for New Year's Eve that would include an Acorn Drop.

Remer said the city would consider granting permits for events that will attract 25 or fewer people – in line with state restrictions on outdoor gatherings – such as block parties. The cancellation decision also doesn't affect events at the Raleigh Convention Center and downtown arts complex or city Parks and Recreation programs.

Organizers of other events have already taken action.

In July, the Raleigh Merchants Association canceled the iconic Raleigh Christmas Parade for the first time since World War II and the city postponed ticket sales for the Holiday Express train ride at Pullen Park.

Instead of an in-person event, the Christmas parade will be livestreamed on Nov. 21.

Baldwin said the decision to cancel beloved events does not come easy.

"These are hard decisions," she said last week. "Everybody has great memories of these events. From IBMA to First Night, from festivals to food truck rodeos, this is how we celebrate as a city. Having to say we're going to cancel them is really difficult."

The upcoming flu season, Labor Day celebrations and students heading back to school all had an impact on the city's decision, she said.

"It's metrics, but it's also erring on the side of caution," she said. "We have to protect public health."

Wake County collects most taxes in June; collections still down by $11.2M

From an economic standpoint, Raleigh is taking a "huge hit" by canceling such events, Baldwin said. The city is losing hundreds of millions of dollars due to coronavirus, she said.

"We have to plan for the short term, but we also have to look long term and not give up," she said. "We have to have an optimistic outlook that things will improve."

In June, Wake County collected the most tax revenue it has since the pandemic began, but tax collections are still down by $11.2 million compared to this time last year.

More than 100 public large-scale events and festivals have been canceled or rescheduled in Wake County since the pandemic hit, according to the most recent county tourism impact report.

Raleigh was counting on tax dollars from many planned conventions, meetings and group sporting events that had to be canceled due to the pandemic. The projected economic loss due to these events being canceled is totaled to $118.5 million.

More than 220 conventions, meetings and group sporting events booked by Visit Raleigh and the Greater Raleigh Sports Alliance were canceled, the report said.

"However, working with local hotels, event venues and competition sites, the organization’s sales teams were able to reschedule 35 events, preventing them from canceling outright," the report said.