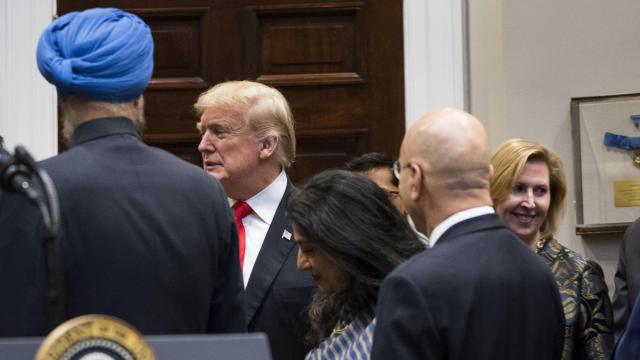 WASHINGTON — She bad-mouthed the defense secretary. She was the hatchet woman for John Bolton, the famously combative national security adviser, and drove out staff members from the National Security Council who were deemed insufficiently conservative or loyal.

But in disparaging two members of Melania Trump’s staff who traveled with the first lady on her trip last month to Africa, Mira Ricardel, a deputy national security adviser, apparently went too far.

In a White House where the drama has been constant, but almost always behind the scenes, an email to reporters on Tuesday from Stephanie Grisham, a spokeswoman for the first lady, was unusually direct: “It is the position of the Office of the First Lady that she no longer deserves the honor of serving in this White House.”

The email was sent less than an hour after Ricardel appeared at an official White House event with President Donald Trump.

There were nonetheless conflicting reports by late afternoon on whether Ricardel had actually been fired. The Wall Street Journal reported that she was brusquely escorted off the grounds of the White House, only to be corrected an hour later by two White House aides, who said that Ricardel, who could not be reached for comment, was still employed.

For weeks, Melania Trump had warned her husband’s aides that Ricardel, who is widely distrusted among West Wing staff, was spreading negative stories, including about the first lady.

But the fact that Ricardel was in limbo on Tuesday reflected an unusual amount of muscle-flexing by the first lady — who normally avoids internecine palace intrigue — as well as the limits of her influence. It also showed the obstinance of Ricardel’s boss, Bolton — who has a reputation as a shrewd player in a chaotic White House and as someone who is not intimidated, even by the president’s wife.

Melania Trump’s problems with Ricardel seem to date to the first lady’s trip to Africa in October, according to people with direct knowledge of the situation.

Ricardel had announced the trip before it was fully planned, according to one of the people, and then threatened to pull resources for it after learning that she did not have a seat on Melania Trump’s plane. After the trip ended, Ricardel made accusations of inappropriate behavior by Melania Trump’s most trusted staff members, including Lindsay Reynolds, the first lady’s chief of staff — claims that a person close to the first lady said were false.

Melania Trump then complained to John Kelly, the White House chief of staff, about Ricardel, and Kelly raised the issue with Bolton, two White House officials said. Kelly is theoretically Bolton’s boss, but the national security adviser has so far refused to remove Ricardel, who was spotted in her office late Tuesday afternoon.

A fixture in Republican foreign policy circles, Ricardel has honed a reputation as a hawk on policy and as a hard-edge bureaucratic infighter. During the early 1990s, she advised Sen. Bob Dole on the Balkans, drawing on her own Croatian background, and later worked for Defense Secretary Donald Rumsfeld in President George W. Bush’s administration.

After supporting Donald Trump for president, she was named to head his Pentagon transition team. In that capacity, she clashed with Jim Mattis, Trump’s choice for secretary of defense, stopping him from hiring Anne Patterson as undersecretary of defense for policy, and rejecting more than a dozen of Mattis’ other proposed nominees for that job.

Mattis, in turn, later tried to block Ricardel when she was considered for posts in the Trump administration, though she eventually served as undersecretary of commerce for export administration before Bolton brought her to the National Security Council.

Ricardel, administration officials said, suspected Mattis of trying to load up the Pentagon with Democrats and supporters of Hillary Clinton’s 2016 presidential campaign. Not long after Ricardel’s arrival at the National Security Council, Donald Trump went on CBS’ “60 Minutes” and said he believed that Mattis was a Democrat.

The drama surrounding Ricardel was the highlight of a day of rampant speculation about personnel moves that the president might be contemplating.

Three people said that Trump is almost certain to fire Kirstjen Nielsen, the secretary of homeland security, who has long been a target of the president’s displeasure. And Kelly’s fate is believed to be tied to what happens to Nielsen.

Inside the White House, removing Nielsen — who was Kelly’s top aide when he was secretary of homeland security — is seen as a way for Trump to push out Kelly without actually having to fire him. Nick Ayers, the chief of staff to Vice President Mike Pence, is seen as a replacement for Kelly, if he leaves. The Washington Post first reported that Nielsen may depart soon.

Ayers is favored by Trump’s son-in-law, Jared Kushner, and daughter Ivanka Trump, both of whom serve as West Wing advisers. Trump’s oldest son, Donald Trump Jr., has also told friends that he sees Ayers as “competent,” a stamp that the Trump family has not always affixed to people working for their father.

Ayers did not travel as originally planned with Pence on his official trip to Asia this week, two White House officials said. And another prospective chief of staff, Mick Mulvaney, who already leads two agencies and who had been seen as campaigning for the chief of staff job, has told aides that he is no longer interested.

Several people working in the White House have expressed concern to the president about putting Ayers in that role, and they have warned that some staff members might quit because of it.

Trump hates interpersonal confrontation, and he often lets aides he does not like remain in their positions for uncomfortably long periods, meaning any changes could still be weeks away, if at all, including doing something about Ricardel, the people close to the president cautioned. Trump, however, has grown increasingly suspicious that Kelly and his closest aides are leaking stories.

But Nielsen has been a target of the president’s ire for many months, primarily over his administration’s “zero tolerance” immigration policy and his belief that she was not carrying it out effectively. Trump has derided her previous service in the Bush administration and questioned her loyalty. He also helped ensure that she was the face of the deeply controversial border separation policy involving taking children from their parents.

Kelly has defended Nielsen to the president, and has tried to shield her from criticism from other Cabinet members, although some of Trump’s allies regard his views and treatment of her as unfair.

Nielsen has struggled to explain to the White House the complexities of border security, and one department official said Nielsen has even pushed back on many measures suggested by immigration hard-liners, though she has forged ahead with efforts to limit immigration using other contentious policies. The most recent effort is a proposal that would deny asylum to anyone who arrived in the country illegally.

The employees believe Nielsen’s fate was sealed with the release of the agency’s border enforcement data over the past two months, which showed that while the overall number of people apprehended at the border remains low, the number of families making the trek to the United States has grown.