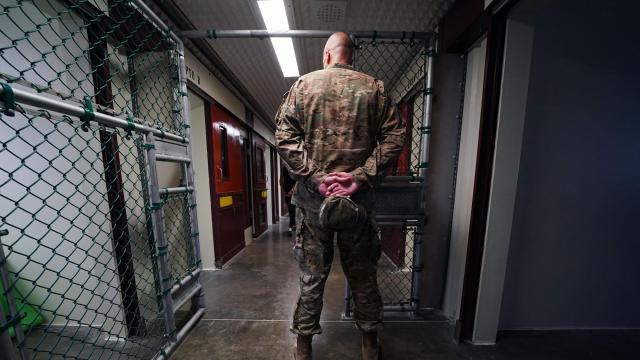 The first 100 members of the prison staff at Guantánamo Bay, Cuba, have received initial vaccines against the coronavirus, the U.S. military said Tuesday evening, although it declined to say whether any of the 40 wartime prisoners at the detention center were offered or received vaccines.

Capt. Garrett Kasper, a Navy spokesman at the prison, said in a statement that a shipment of Moderna vaccines arrived at the base Friday, and 100 people assigned to the detention operation that has 1,800 staff members were vaccinated the next day.

More vaccinations were scheduled to take place Wednesday morning, according to an announcement posted by the base’s small community hospital. Recipients were to include emergency room and urgent care workers as well as some other emergency workers described as “first responders.”

About 6,000 people live at the base, but the detention center apparently received a separate supply of the vaccines for its personnel.

The military said the first 100 vaccine doses were given exclusively to U.S. forces, including National Guard troops on temporary assignment as prison guards and Navy medics who care for the detainees in the cellblocks.

Kasper said the prison headquarters was expected to receive a second shipment of Moderna vaccines this week.

In the first months of the pandemic, Guantánamo disclosed that two service members had tested positive for the virus and were isolated. It provided no further updates on cases, because the Pentagon banned base-by-base disclosures.

Most legal visits and military commission proceedings involving the prisoners — including Khalid Shaikh Mohammed and four other men accused of conspiring in the Sept. 11, 2001, attacks — have come to a standstill during the pandemic. Troop rotations have continued, and some base families have traveled to and from Guantánamo on military leaves and vacations.

People arriving on the base are required to individually quarantine for two weeks. The commissary, gym, church compound, 245-pupil school system and pub are all open, the last with a 50-patron limit and a requirement that the wait staff wears masks.