The first four civilians are heading into space on Wednesday night — the first mission in history that will not have any professional astronauts onboard.

Beginning shortly after 8 p.m., look to the southeast, initially low on the horizon. The rocket will be moving from your right to your left as it climbs the hill towards orbit.

This launch isn't expected to be as prominent as pre-dawn launches. This is because we'll be looking at light from the setting sun reflected off the plume instead of shining through from the rising sun.

Several WRAL viewers sent in pictures of the launch from their homes. The one below was taken by Allison Newell in Jacksonville, North Carolina. 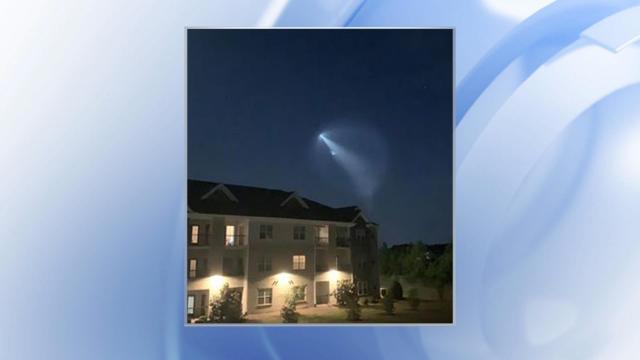 The mission, dubbed Inspiration4, is just the latest milestone flight in what has been a busy year for private spaceflight companies, following joyrides to suborbital space by billionaire entrepreneurs Richard Branson and Jeff Bezos over the summer.

SpaceX launch may be visible from NC after sunset

Joining Isaacman on the journey will be 29-year-old Hayley Arceneaux, a bone cancer survivor who now works as a physician assistant at St. Jude Children's Research Hospital. Arceneaux, who will act as the crew's chief medical officer, will become the youngest American to fly in space.

Chris Sembroski, a 42-year-old U.S. Air Force veteran and aerospace data engineer, and 51-year-old Sian Proctor, a geoscientist and licensed pilot, will round out the crew.

"Up in space, if everyone works fine besides the micro-gravity, there's really nothing to work about in terms of atmosphere," said Dr. Richard Moon with Duke.

He and his team trained the crew on how to react to low oxygen levels and how to function in high altitudes.

The Inspiration4 crew was taken about 2,5000 feet into the air to train in Duke Health's hyperbaric chamber. The crew was given tasks, like writing, some calculations and a simple puzzle.

"Within a few minutes, they all became quite aware that when the oxygen level goes down, they are not able to do things quite like they should," Moon said. "Interestingly enough, when this happens, often people are unaware that there's anything wrong."

Moon says that if an emergency were to happen, this oxygen training helps them be able to recognize it.

The Inspiration4 mission will resemble SpaceX's routine flights to the International Space Station, except this time, the capsule will not dock at the orbiting lab. Instead, the spacecraft will circle the planet 15 times each day from an altitude of nearly 360 miles, higher than the current orbits of the space station and the Hubble Space Telescope, according to SpaceX.

The Crew Dragon capsule will spend three days circling Earth before re-entering the atmosphere and splashing down in the Atlantic Ocean, off the coast of Florida, according to SpaceX.

SpaceX founder and CEO Elon Musk has said that while early space tourism flights may be out of reach for all but very wealthy people, these pioneering missions will lay the groundwork for more regular and more affordable trips to space in the future.


Copyright 2021 NBC News/WRAL. All rights reserved. This material may not be published, broadcast, rewritten or redistributed.