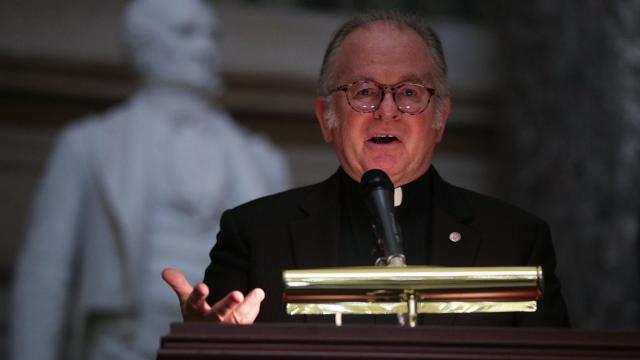 Ryan moved quietly two weeks ago to remove the chaplain, the Rev. Patrick J. Conroy — so quietly that some lawmakers assumed the Catholic priest was retiring. But in an interview Thursday with The New York Times, Conroy said he was blindsided when Ryan asked him to resign and suggested politics — specifically a prayer he gave in November when Congress was debating a tax overhaul — may have been a factor in the speaker’s decision.

Conroy prayed then for lawmakers to “guarantee that there are not winners and losers under new tax laws, but benefits balanced and shared by all Americans.” Shortly after, he said, he was admonished by Ryan, who is also a Roman Catholic.

“Padre, you just got to stay out of politics,” he recalled the speaker saying.

As reports of the dismissal circulated in the Capitol, some Republicans, in a closed-door meeting Friday morning, demanded an explanation from Ryan, while Democrats commandeered the House floor in a boisterous, if unsuccessful, attempt to force the House to investigate Ryan’s decision.

At the House Republican meeting, Ryan told lawmakers that complaints about Conroy’s pastoral care — not politics or prayer — led to his decision, according to several who attended. The speaker’s spokeswoman, AshLee Strong, said simply that he had “made the decision he believes to be in the best interest of the House.”

But the dismissal appears to be an unforced error in a political year when Republicans cannot afford mistakes. The controversy exposed long-simmering tensions between Roman Catholics and evangelical Christians over who should be lawmakers’ religious counselor. And a public clash between Southern evangelical Republicans and Northern Catholics could play to the advantage of Democrats, who are pressing hard to bring working-class Catholic regions in Pennsylvania, Michigan, Ohio and Wisconsin back into the Democratic fold.

The controversy was heightened when Rep. Mark Walker, R-N.C., a Baptist minister, said Thursday in an interview with The Hill newspaper that he hoped the next chaplain of the House might come from a nondenominational church tradition who could relate to members with wives and children. 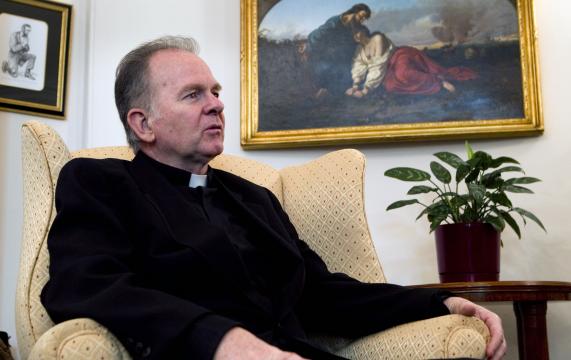 “To be excluding one religion up front, that has all sorts of connotations coming from the evangelical community,” King said in an interview. He said he had received several inquiries from priests about Ryan’s decision and told the speaker, “This issue is not going to go away that quickly.”

A House Democratic aide, speaking on the condition of anonymity to discuss private conversations, said Ryan gave the Democratic leader, Rep. Nancy Pelosi of California, an additional reason for Conroy’s ouster: Ryan said he was upset that the chaplain had granted an interview to The National Journal.

In the interview, Conroy expounded on matters like sexual harassment and a possible spiritual crisis in Congress. He said he was asked during his job interview whether he had ever molested a child. And while he said he had never been asked to counsel a victim of sexual harassment or assault, he had handled cases of workplace abuse during his tenure in the House. “Think about it: Who are the people that run for office?” he was quoted as saying. “Are they all highly skilled in every endeavor? No! They’re not. Many of them, I can tell you, don’t know how to say hello in the hallway, let alone work with office people that maybe they don’t think they have to listen to.”

Pelosi issued a statement arguing that Ryan did not have the authority to dismiss the chaplain. “I have expressed my forceful disagreement with this decision to the speaker,'’ she said. “It is truly sad that he made this decision, and it is especially bewildering that he did so only a matter of months before the end of his term.”

The outrage broke down largely along party lines. Of 148 members of Congress who signed a letter to Ryan demanding answers on why he ousted Conroy, just one, Rep. Walter Jones of North Carolina, is a Republican.

“This will have ramifications,” Jones said Friday afternoon. “This is bigger than Father Conroy and the House of Representatives. This is about religion in America.”

The controversy was multifaceted, pitting evangelicals against Catholics but also resurfacing lingering anger over this Congress’ singular accomplishment, the 10-year, $1.5 trillion overhaul of the tax code.

To supporters of that legislation, especially one of its chief architects, Ryan, the prayer issued by Conroy would have stung: “May all members be mindful that the institutions and structures of our great nation guarantee the opportunities that have allowed some to achieve great success, while others continue to struggle,” the priest said in the midst of the debate. “May their efforts these days guarantee that there are not winners and losers under new tax laws, but benefits balanced and shared by all Americans.”

Conroy, who was named to the post in 2011 by another Catholic Republican speaker, John A. Boehner, said he did not regard his November prayer as political in nature.

He said the speaker’s remarks to him afterward marked the only time anyone from the speaker’s office had chastised him for veering into the political realm: “I’ve never been talked to about being political in seven years.”

In an election that ultimately will revolve around President Donald Trump, the controversy may well prove ephemeral.

“Whatever Democrats try to do, if they try to politicize this or capitalize on this, I just think it is way too obscure,” said Douglas Heye, a longtime Republican political strategist and a Catholic. “If you are having a larger conversation about ‘Catholic issues,’ Trump is going to dominate that.”

Some on the left see an emerging issue for Ryan and his supporters. “Partisans will likely frame this as a Catholic versus evangelical contest,” said Christopher J. Hale, a strategist who did Catholic outreach for President Barack Obama’s re-election campaign. “They made a political football out of a good Catholic priest.” The spat is particularly pointed because religious power in Washington has shifted drastically under Trump to white evangelical leaders. Unlike Obama, who relied regularly on a religiously diverse group of interfaith advisers including prominent Catholics, Trump has elevated a select group of conservative evangelicals who routinely defend his political agenda, and it is rare to see a Catholic bishop in the White House.

Trump himself famously feuded with Pope Francis during his presidential campaign over Trump’s push to build a wall across the southern border, which Francis called “not Christian.” Last year, some of Trump’s evangelical advisers sought to quiet Vatican criticism of the rightward direction of American Catholicism.

Before Francis became pope, the Vatican seemed to favor Republican mainstay issues such as opposition to abortion and same-sex marriage. His rise helped reset the role of Catholicism in American public life, and prioritized political and economic messages on immigration and climate change.

Francis, like Conroy, is a Jesuit, an order of priests viewed by some as more liberal. Conroy’s resignation is all the more contentious in Catholic circles because Ryan is a Catholic conservative.

“We are a long way from Pope Francis at the White House and in the Capitol,” said John Carr, director of the Initiative on Catholic Social Thought and Public Life at Georgetown University. “The divisions are greater, they are more stark, and they are more angry.”

On Friday, The Catholic Association, a more conservative group, came to Ryan’s defense. Maureen Ferguson, a senior policy adviser with the organization, called criticism surrounding his decision to ask Conroy to step down “downright absurd.”

“Anyone who knows Speaker Ryan knows he is a devoted Catholic,” she said. “Much ado is being made about nothing.”

For others, it far more serious. The Rev. James Martin, a Jesuit priest and an editor-at-large of America magazine, said he has heard from Catholics who are “dismayed” that a chaplain would be fired for apparently defending the poor, and he worries about the anti-Catholic dog-whistling.

“The implication that, as one legislator said, a ‘family man’ would be more suitable smacks of anti-Catholicism,” Martin said. “By that yardstick, Jesus wouldn’t qualify either.”