Fired FBI Deputy Is Said to Have Kept Memos on Trump 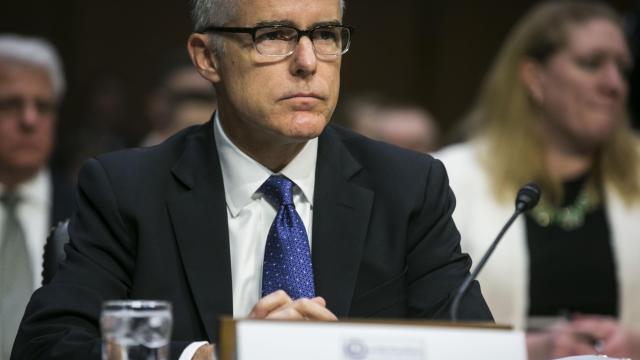 The memos could bolster the account of Comey, whose own memos and testimony describe repeated requests by Trump to clear his name. Comey said Trump also asked him to shut down a criminal investigation into his former national security adviser, Michael Flynn. Both matters are under investigation by the special counsel, Robert Mueller, who is considering whether Trump tried to obstruct justice.

McCabe’s memos were left at the FBI, which means that Mueller’s investigators have access to them as they work to corroborate Comey’s account. Trump has denied pressuring Comey to end the Flynn investigation. Comey was fired last spring, and the revelation of his conversations with Trump helped lead to the special counsel’s appointment.

McCabe is known to have had at least three meetings with the president. In one, he asked McCabe how he had voted in the presidential election. In each, he asked about McCabe’s wife, Jill, who ran a failed campaign as a Democrat for the Virginia state Senate. Andrew McCabe has identified as a lifelong Republican but did not vote in the 2016 presidential race.

The existence of his memos was first reported by The Associated Press.

McCabe was fired less than two days before his retirement. Attorney General Jeff Sessions cited what he said was a lack of candor by McCabe in interviews with internal investigators. His firing had been recommended by career disciplinary officials at the FBI.

He was among the first FBI officials to scrutinize possible Trump campaign ties to Russia. Trump has taunted McCabe both publicly and privately, and Republican allies of the president have cast McCabe as the center of a “deep state” effort to undermine the Trump presidency.

His lawyer, Michael R. Bromwich, said Justice Department officials had rushed to fire McCabe before he could qualify for his pension. “This distortion of the process begins at the very top, with the president’s repeated offensive, drive-by Twitter attacks on Mr. McCabe,” Bromwich said late Friday.

Trump kept up his Twitter barrage Saturday, pointing to hundreds of thousands of dollars in donations to Jill McCabe’s campaign from a political committee run by Terry McAuliffe, the former Virginia governor and a longtime ally of the Clintons.

“The Fake News is beside themselves that McCabe was caught, called out and fired,” Trump wrote. “How many hundreds of thousands of dollars was given to wife’s campaign by Crooked H friend, Terry M, who was also under investigation? How many lies? How many leaks? Comey knew it all, and much more!”

The president’s personal lawyer seemed to lend credence Saturday to the idea that Andrew McCabe and Mueller were linked in the eyes of the president. Asked by The Daily Beast for a response to McCabe’s firing, the lawyer, John Dowd, sent an email saying it was now time that the special counsel investigation be shut down.