Raleigh, N.C. — Capitol Broadcasting Corp. facilities staff and a ServPro crew spent hours over the weekend clearing the WRAL-TV Studios building of smoke after a fire sparked Friday night in a storage room.

WRAL-TV General Manager Steve Hammel said inspectors are leaning toward Ni-Cad batteries as the source of the fire, and that a Raleigh fire inspector was expected back at WRAL on Tuesday. The official report with the fire's cause will come from RFD, Hammel said.

Employee Chris Cormier, who inhaled some smoke as he tried to extinguish the flames, was out of the hospital and back at work by Saturday morning.

News never stops at WRAL Studios! Debra Morgan and Gerald Owens give an update on the fire that interrupted #HSOTLive @highschoolot. Thank you #raleighfiredept 🔥 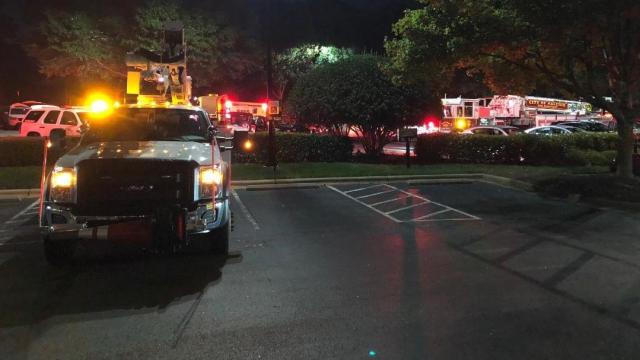 Pete Sockett, WRAL engineering and operations director, said a ServPro representative arrived at the television station's headquarters within an hour of the fire trucks, and other restoration companies called over the subsequent 24 hours to pitch their services.

So thankful for the #Raleigh firefighters here at #wral! We are all outside because of a fire. Building is full of smoke. pic.twitter.com/fxC5WIIry0

After the fire was out and the building declared safe by the Raleigh Fire Department, dozens of employees hustled to produce WRAL's Late News and Football Friday.

WRAL-TV, which was airing primetime programming when the fire began, never went off the air. The final episode of the season of HighSchoolOT Live, a football highlights show, was forced to end abruptly once the fire alarm began to blare.

Sockett said the fire damaged standby technical gear that will have to be replaced, but it did not hinder any of WRAL's day-to-day operations.

Air cleaners with heavy-duty filters worked through the weekend to clear the air, and cleaning crews mopped down floors and walls.

Getting an update from our news director about the fire in the studio. #HSOTLive pic.twitter.com/zcdQi43YsB