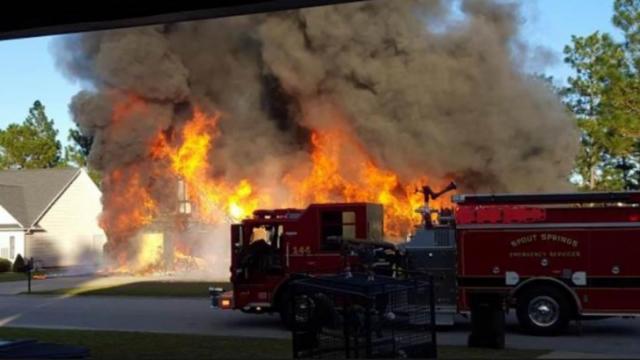 The fire broke out just before 6 p.m. at a home on Breezewood Drive near Lillington in Harnett County. Neighbors who live in the area said that the couple who lived in the home were in the process of moving out.

Neighbors said that one of the residents who lived in the home is a disabled veteran. He was the only one in the home when the fire started.

Neighbors said that most of the couple’s belongings were in the garage because they had been packed up to prepare for the move. The garage practically disappeared in the fire.

Twenty-five fire firefighters responded to the incident and it took 45 minutes to get the flames under control. The fire burned so hot that it melted the siding on a neighboring home.

Nobody was injured and the couple who lived in the home was staying in a hotel Monday night.