Fire in the Triangle crowns champion

Raleigh, N.C. — It was a battle of fine dining proportions when reigning Fire in the Triangle champion Dean Thompson, of Flights at the Renaissance Hotel in North Hills, took on Steve Zanini of Jimmy V's Steakhouse and Tavern in Cary Monday night.

Diners knew they were in for a treat. Thompson and Zanini combined for the top five highest-scoring dishes in this year's competition.

When asked last week about his potential opponents, Thompson said he felt Zanini was the chef whose style was most similar to his. In the semi-finals last week, Zanini defeated 518 West's Serge Falcoz-Vigne, while Thompson bested City Kitchen's Younes Sabouh.

For the finale, the chefs were tasked with using two secret ingredients: Krupnikas, made by The Brothers Vilgalys out of Durham, and Old Mill of Guilford Grits. Both ingredients had to be present in at least two of the three dishes.

While grits are just that - grits! - not many people were familiar with Krupnikas, a traditional Lithuanian style of Spice Honey Liqueur. This 80-proof liqueur starts out with a sweet honey flavor that leaves you with a warm, spicy finish. All of the diners got small tastes of liqueur before the first course.

North Carolina wine flights were available, including selections from RayLen Vineyards in Mocksville.

Now, let's get to the food!

Each chef had to create three dishes using the secret ingredient. It was a blind tasting, so no diners knew who made what. Here's a rundown of each course, reviews and results. In each round and overall, diners (the Joes) and local media foodies and chefs (the Pros) grade the dish on aroma, presentation, creativity and other factors. The scores listed are the final scores for each dish. Scores are out of 40 points.

The cream and scallops had many diners cleaning their plates. With such a strong and sweet flavor from the liquer, diner Oba Goodson said he was quite impressed that the chef was able to mute its flavor down.

Diner Greg Hodges said he really enjoyed it, despite not even liking scallops.

The grits were the most prevalent secret ingredient in this dish.

Earlier in the day, the dish wasn't quite coming together and host and Competition Dining creator Jimmy Crippen said he heard that there might be a menu change. Then, he heard that Zanini was going to keep the menu the same saying, "I'll go down fighting."

Fire in the Dock winner and Cutthroat Kitchen champ Gerry Fong, of Persimmons, described it as "killer barbecue."

Diner Alice Remedios said it best with this Tweet: "The girl next to me seriously just picked up her plate and licked it!!"

Diner Andrew Orr simply called it "insane." And he was right, BUT it would have been even better if it had been warmer. I was at one of the back tables and it was just lukewarm. The pork was fabulous even cold!

Fong, a pro judge for the evening, enjoyed the burst of flavors, saying that he wanted more.

Greg Hodges just called it a "slamdunk" - saying it was the best dish so far. 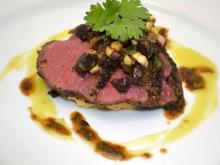 Diner Jill Orr said the grits were the best she had tasted so far.

"It's too pretty to eat," VanGundy Tweeted.

Gerry Fong and the rest of his table were fans of the chocolate tart. 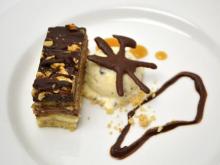 The presentation wasn't lost on diners who noted the cookie shaped like the Competition Dining logo and the drizzled chocolate in the shape of the state of North Carolina.

Table six were big fans, as was Mims who cleaned his plate.

Thompson said this was "by far the toughest battle" he has had. He noted that a freezer went out just before service started.

In the end, Thompson prevailed becoming the first chef in Competition Dining history to win two back to back titles.

Crippen pointed to Thompson's consistency in the kitchen with his team routinely scoring 30 points or more on many of its dishes this year.

Thompson feels that last year's experience really helped him to perform even better this year.

While he go for three red jackets? Not yet. Thompson said he is planning to sit out next year.

Zanini said he was proud of his team and their performance. "We did what we wanted to do," he said.

Fire in the Triangle is part of the Got to Be NC Competition Dining Series.

As the winner of Fire in the Triangle, Thompson received $2,000, the coveted red chef's jacket and a set of knives from Ironman Forge in Charlotte.

He will go on to compete against the winners of the Fire on the Rock, Fire on the Dock, Fire in the Triad and Fire in the City competitions. The last chef standing wins $2,000 and the coveted black chef’s jacket. The runner-up will get $500.

WRAL's Out and About is the official blogger for Fire in the Triangle.