Raleigh, N.C. — Teams from and Jimmy V's Steakhouse in Cary squared off Tuesday in a Fire in the Triangle semi-final that featured some of the highest scores ever recorded in a Competition Dining event.

My dining companions at Table 3 took the instruction to Tweet seriously and kept the evening engaging. They included Chef Jimmy Reale, of Chapel Hill Country Club, who shared tastes of his flight of wines from  Biltmore Winery.

Diners also had the option of ordering one of the offerings from Fullsteam Brewing in Durham – Cackalacky, a ginger pale ale, and Summer Basil, which features locally grown basil.

Each chef had to create three dishes using the secret ingredient. It was a blind tasting, so no diners knew who made what. Here's a rundown of each course, reviews and results. In each round and overall, diners (the Joes) and local media foodies and chefs (the Pros) grade the dish on aroma, presentation, creativity and other factors. The scores listed are the final scores for each dish. Scores are out of 40 points.

Fire in the Triangle 2014 Coverage

The story of this dish was the sweet chutney with a hint of cinnamon spice, diner Kamala Prince said. I heard the word echoed as I circled the room.

Jimmy Crippen, Competition Dining creator and the master of ceremonies, said of the Calvander Crisp, "I could eat those by the bagful."

Both Pros and Joes gave this dish a score of more than 30 points, a rarity in Competition Dining and the overall top score of the evening.

Seth, a diner from Raleigh, praised "the overall roundness of the dish, the risotto, the mustard."

Beside him, Josiah said Course 2 was his favorite because the presentation and flavor combined to make it impressive. 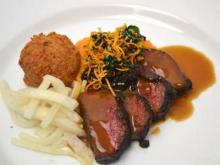 The colors of this dish made it a treat for the eyes and the tongue.

"I really enjoyed the combination of components," diner Helen from Cary said, "But I am not sure I tasted all of the secret ingredients."

Amos, from Raleigh, paused in scraping his plate clean to say, "Hands down, the tender venison makes this dish."

This elaborate dish scored higher with Pros than Joes, although it's hard to disappoint anyone with a dish described on Twitter as "bacon inside of bacon."

"The pork was very sweet and moist," Josiah said. 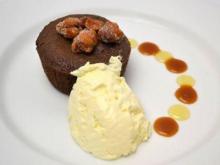 "That's ridiculous," Reale said as he cut into a perfectly molten chocolate core of his cake.

Moans of pleasure resounded around Table 3 as this rich, smooth dish was consumed.

Crippen noted after the battle that he's seen a lot of chefs attempt a molten cake but never one deliver so many with such perfect texture.

After the richness of Course 5, this tart and light dessert course was a welcome contrast.

"This is kind of why I come here," Maureen Melita said. "I want to sample something I never would have thought to put together."

In the end, Zanini's pork three ways and his 30 scores in Course 2 were enough to defeat Falcoz-Vigne, 27.64 to 25.88, to advance to the Fire in the Triangle finale next week. He will face defending Fire in the Triangle champion Dean Thompson and the team from Flights.

"I try not to do too much frou-frou stuff," Zanini said. He expressed surprise and a bit of relief in winning.

"It's a little bit hard to get honey in everything, all of the sauces," he said.

He noted an advantage in having competed in a Fire in the Triangle battle in 2013 that included cheese.

"I wanted to use the cheese a little bit more," he said.

WRAL's Out and About is the official blogger for Fire in the Triangle, so look for exclusive content, interviews and more from each battle!