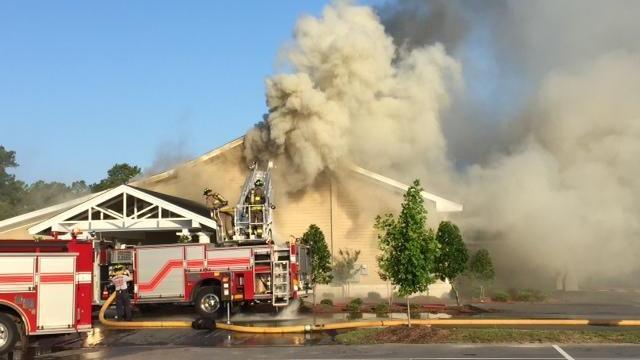 Lumberton, N.C. — Fire destroyed a new wing of the Gibson Cancer Center in Lumberton early Saturday morning, according to officials from Southeastern Health.

Fire broke out at the facility, which is located at 1200 Pine Run Dr., at about 7:15 a.m. No one was inside at the time, and no injuries were reported.

Lumberton fire officials have not released information about the cause of the fire, but officials believe the bulk of the damage to the building was contained to the radiation oncology wing, an addition that opened in July 2014.

The rest of the cancer-care facility will be closed indefinitely due to smoke and water damage, officials said. During the fire, 35 patients from nearby WoodHaven Nursing, Alzheimer's and Rehabilitation Center were evacuated to another wing of the facility. Those patients returned to their rooms about three hours after the fire.

Patients who are currently receiving treatment at the facility were being notified Saturday about their plan of care, which will include transfers to Cape Fear Valley Medical Center’s cancer services division until GCC’s facility can be restored, according to Lori Dove, Vice President of Post-Acute Care Services for Southeastern Health.

“Our patients are our top priority and their uninterrupted cancer care is our main focus at this time,” Dove said in a statement.

GCC patients and their family members who have questions about their care may call an information hotline at 910-671-5599.