Firewall credited with containing fire in Durham townhomes under construction

The Durham Fire Department responded to The Grove, which is under construction off Jackson Street, behind 505 W. Chapel Hill Street, before midnight.

One three-story home was completely damaged during the fire. The fire was brought under control in 30 minutes, but the structure collapsed, damaging the empty homes on either side of it. The fire took more than 60 firefighters to get under control. All three homes were under construction.

A contractor on site said a firewall prevented the entire structure from burning.

"That really stopped the spread of the fire from getting to the other building. You can see it’s pretty dramatic," said Chris Iannuzzi, deputy chief of the Durham Fire Department.

Sandy Kromenacker, of Forensic Fire Consultants, was impressed with how quickly the fire was brought under control. He compared this fire to the one that raged overnight in downtown Raleigh in the spring of 2017.

Kromenacker said sprinkler systems would have made a difference in both the Raleigh fire and in Durham last night.

"If there would have been a sprinkler system in place, it would have the fire confined to the room of origin and possibly put the fire out," he said.

No firefighters were injured, and the cause of the fire is unknown.

"There's just no way to say what it is at this point," Iannuzzi said.

Hopefully once investigators start digging through the rubble they can determine a cause, he said. But with as much structure as the buildings had, sometimes it can be difficult to determine a cause.

These townhomes were in the electrical phase of construction, so they had power but not sprinklers.

Research shows the modern homes are valued around $500,000.

A witness who lives nearby told WRAL News smoke from the fire was higher than the tree lines. Christian Montgomery said he was sitting on the back porch with his husband when they heard a "loud bang." 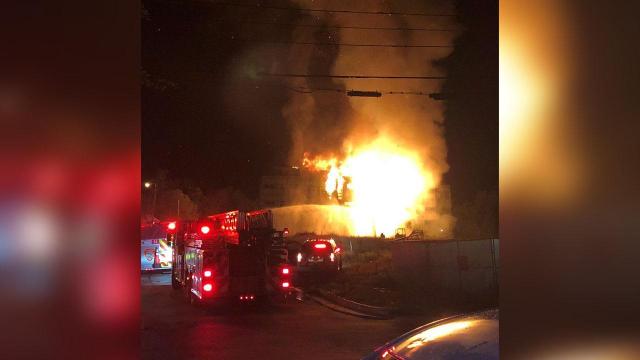 "He thought it was a car that had maybe caught fire and then literally two seconds later we heard this loud bang and we looked over and the fire had gotten like three times bigger than what it was two seconds before," he said. "It got pretty big pretty fast."

Montgomery estimated people could see the smoke and flames for miles.

"It was huge," he said. "The fire was definitely above the tree line because I’m on the top floor of our building and I could see it clearly. So I know people from the street could probably see it too."

The townhome complex is very close to the site of the Durham explosion that occurred last year. Montgomery said he thought of it immediately.

"It definitely caught me off guard," he said. "I drive by it everyday and to see it I was like, 'Wow, they weren’t even finished being built, and now they’re on fire.'"