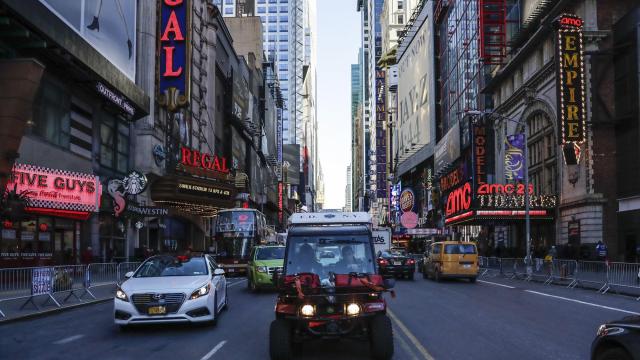 NEW YORK — An ambulance, with its siren wailing and lights flashing, was unable to move, stuck in gridlocked traffic one recent afternoon along Eighth Avenue in Times Square. Some drivers tried to get out of the way even as pedestrians hurried past. But it was too late. The light changed and vehicles from a nearby street spilled onto the clogged roadway causing further congestion.

Scenes like these are common for emergency medical workers in Times Square, one of the most crowded places in the country. Despite recent efforts by the New York Fire Department to improve its citywide response times, a traffic-jammed Times Square — where it took a minute and 20 seconds longer to respond to life-threatening emergencies in the 2017 fiscal year compared with the rest of Manhattan — continued to pose a problem, Fire Commissioner Daniel A. Nigro said.

Last summer Nigro came up with a potential solution: A unit of emergency medical workers would use small two-passenger vehicles, called Gator utility vehicles, instead of ambulances to respond to emergencies. Since the unit was created in August, response times for life-threatening calls in the area have improved by an average of 68 seconds in the last four months of 2017 compared with the same period in the previous year. The data provided by the Fire Department represents the time from when a 911 call was received by the department to when an ambulance arrived at the scene.

The Gator vehicles, which are the size of a golf cart, are equipped with a chair, a defibrillator, an oxygen bag and medical supplies, and are small enough to drive on bike lanes and squeeze through Midtown Manhattan’s bumper-to-bumper traffic and through tight pathways between Broadway theaters. The vehicles can travel up to 40 mph.

“It’s a very popular concept that started at sporting events and festivals — areas where you don’t have great access for normal size vehicles,” said Robert Avsec, a retired battalion chief for the Chesterfield Fire Department in Virginia. “Now they’re becoming more and more of the response vehicle especially for the Fire Department.”

New York City first purchased Gator utility vehicles in 1999, in preparation for the New Year’s Eve celebration in Times Square, and in anticipation of the computer bug called Y2K. Since then, the vehicles have been used during other major events, on beaches, in parks and in zoos. They were also used after the terrorist attacks on Sept. 11, 2001.

But this is the first time the vehicles have been used in response to congestion in Midtown, where traffic has slowed 23 percent in the last decade and the average speed is 4.7 mph. The New York Fire Department joins fire and emergency departments in England, Ireland, Israel and Japan that have been using smaller vehicles or motorcycles to provide faster medical service for years.

“As the city continues to grow in population and visitors, we have to find new and better ways to get to our patients,” said Nigro, who turned his attention to Times Square after a man plowed his vehicle into pedestrians in May. Emergency medical workers were able to reach the victims quickly that day, he said, but he was reminded of how congested the area can be for ambulances to navigate.

Michael Martinez, a member of the new unit, said: “Ambulances are struggling to come through this area safely because there are so many cars. The Gators are small. We’re able to maneuver in places the ambulance can’t get to.”

Times Square includes 39 Broadway theaters and more than 19,000 hotel rooms. Up to 450,000 people are in the area daily including about 180,000 workers. Hundreds of thousands of people use one of the area’s 12 subway lines, where in December, a would-be suicide attacker detonated a pipe bomb in a subway passageway.

The Times Square Gator Unit responds to medical calls from 42nd Street to 48th Street between Sixth and Eighth Avenues. The eight-person unit operates daily from 10 a.m. to 10 p.m. Since August, the unit has responded to 358 incidents, but that figure is expected to grow once the unit is placed onto the general dispatch system. Ambulances respond to an average of eight to 10 assignments an hour. During a recent ride-along with the new unit, the emergency medical workers reached patients about 10 minutes before an ambulance on three occasions. Their average response time is about three to four minutes from dispatch to arrival.

A 911 call came in shortly after 2 p.m. one recent day: A man had fallen in front of the Port Authority Bus Terminal. The members of the new unit jumped into their Gators, which were parked on 43rd Street near Seventh Avenue, turned the sirens on, and traveled along 42nd Street toward Eighth Avenue. Some pedestrians staring at the vehicles seemed slow to move out of the crosswalks. With half a block to go, the Gators were stuck in traffic, but the drivers quickly found space between a bus and a car, and squeezed through.

When they arrived they found a man sitting on the curb with a cane by his side and blood streaming down his face from a two-inch gash on his head. The medical workers began treating him and wrapped a bandage around his head. An ambulance arrived 10 minutes after the Gator unit, and took the man to a hospital.

“There are times where an ambulance will take 10 to 15 minutes just to get three blocks from one side of Times Square,” said Donald Hunker, a member of the unit. “Fifteen minutes is a very long time especially when someone needs an ambulance.”

“When we think about patients who are having a life-threatening emergency like a heart attack, arrhythmia or a stroke — these are very time-sensitive conditions,” Eiting said. “A delay of even a few minutes can be the difference between life and death and the difference between someone being able to recover with no disability.”

But in some instances, patients will not need to go to a hospital and the Times Square Gator Unit can administer treatment, freeing up ambulances for other calls. The Fire Department is upgrading the unit’s vehicles to slightly larger ones that can comfortably transport a patient to an ambulance. Nigro said he was also looking to expand the unit to other sections of the city like near Grand Central Terminal or Pennsylvania Station.

Shortly after the unit finished assisting the man at the Port Authority Bus Terminal that day, a call came for a person in distress at the Hilton Garden Inn on 42nd Street. The Gator unit arrived six minutes later and found a man inside a restaurant at the hotel with his family, sweating profusely.

One worker began checking the man’s pulse and heart while another spoke with a relative about his health history. An ambulance arrived at 3:31 p.m., 10 minutes after the Gator unit. Emergency medical workers took the man in a wheelchair to the ambulance outside and he was taken to a hospital.

“People call us, they’re having an emergency,” said Mickey Ginty, a member of the Gator unit. “It’s their worst day and we’re there to do whatever we can to make it better for them and hopefully we leave them better off than we found them. That’s the end goal.”