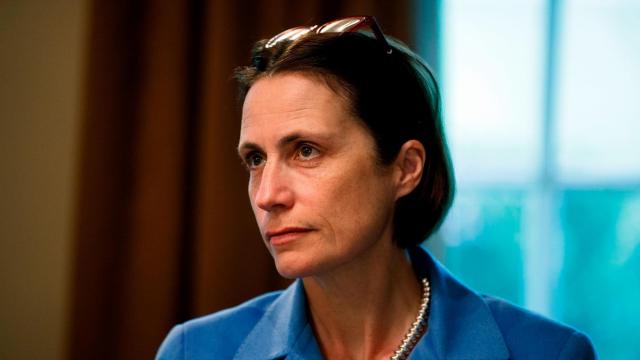 CNN — Fiona Hill, President Donald Trump's former top Russia adviser, raised concerns about Rudy Giuliani's role in US foreign policy toward Ukraine, telling lawmakers on Monday that she saw "wrongdoing" in the American foreign policy and tried to report it to officials including the National Security Council's attorney, according to multiple sources.

"She saw wrongdoing related to the Ukraine policy and reported it," one source said.

The same source told CNN that Hill testified that former national security adviser John Bolton referred to Giuliani -- Trump's personal attorney -- as a "hand grenade" who was "going to blow everybody up," as first reported by The New York Times.

Hill additionally told lawmakers about what she described as a rogue operation carried out by US Ambassador to the European Union Gordon Sondland and White House acting chief of staff Mick Mulvaney, which Bolton characterized as being like a "drug deal," that source said. A separate source said Hill also drew a link between Sondland and Trump in her testimony. Sondland and Trump "were in direct contact," Hill told the lawmakers, according to the source. This source said Hill said the contacts between Trump and Sondland went beyond the discussion about texts exchanged between Sondland and other American diplomats in Ukraine that have been made public.

Hill, who was testifying before the House Intelligence, Foreign Affairs and Oversight committees under subpoena, is among the handful of current and former Trump administration members being interviewed this week by House panels as part of the Democrat-led impeachment inquiry into Trump's July 25 phone call with Ukrainian President Volodymyr Zelensky and its resulting fallout.

Hill was concerned that Giuliani was circumventing the State Department to run what some Democrats have labeled a "shadow foreign policy" by seeking the removal of US Ambassador to Ukraine Marie Yovanovitch and pushing for Ukraine to open an investigation into former Vice President Joe Biden and his son Hunter Biden.

Hill also told lawmakers that she was not part of Trump's July call with Zelensky. One source familiar with her testimony said she was involved in a debate within the Trump administration over what the substance of a potential call between Trump and Zelensky would cover. Another source said she had not been involved in planning for the specific call on July 25.

By the time the call took place, Hill had left the National Security Council.

Another source familiar said Hill testified about a July 10 meeting on Ukraine where Sondland discussed investigations, something that was interpreted as a reference to the President's call for investigations into the Bidens.

Bolton and Hill both were concerned about the comments, and Bolton urged Hill to report the incident to National Security Council lawyer John Eisenberg, according to the source familiar with her testimony. The anecdote was first reported by the Wall Street Journal.

Hill also told lawmakers that the confusion on Ukraine policy was a "corruption" inside the US that the Russians could exploit, according to a source with knowledge of the testimony. She said that American policy toward Ukraine has become politicized and exposed partisan divisions that Putin is able to exploit.

Hill also spoke about the ouster of the US ambassador to Ukraine during her closed-door deposition on Monday with House lawmakers, according to multiple sources familiar with testimony.

Hill told lawmakers that she had high praise for Yovanovitch and expressed her concerns when Yovanovitch was removed, according to sources familiar with her testimony.

"Rudy Giuliani has clearly been a leading force for the administration in defining a shadow foreign policy in Ukraine," said Rep. Jamie Raskin, a Maryland Democrat. "There was an official foreign policy, which was attempting to counter corruption in Ukraine ... so you had two foreign policies working completely against each other"

Republicans, meanwhile, continued their attack on House Intelligence Chairman Adam Schiff's handling of the impeachment inquiry, charging that the California Democrat was selectively releasing information by not making the interview transcripts public. Rep. Matt Gaetz, a Florida Republican not on one of the three committees conducting the inquiry, tried to further confront Democrats' over their investigation by crashing Monday's deposition. He was asked to leave, he said, after a ruling by the parliamentarian.

One focal point of Hill's testimony was likely her skepticism toward Russian President Vladimir Putin. During her stint with the National Security Council, Hill oversaw rocky Washington-Moscow ties, and her views sometimes seemed at odds with Trump's own desire to improve relations with the strongman leader who Trump, as a candidate, often spoke of admiringly.

The former adviser officially departed her role in August -- though she had handed over most of her responsibilities in July -- but was involved as Giuliani was making public pronouncements about Ukraine.

Given Hill's history of working in the White House, there was speculation that Trump could attempt to stop Hill from testifying based on executive privilege. Hill's attorneys argued in a letter on Sunday to the White House Counsel's Office that they did not believe any privilege issues were in play.

"Dr. Hill is mindful of her legal obligations with regard to any classified information she possesses or has knowledge of, and she intends to strictly abide by those obligations," the letter said.

Her attorneys also wrote about a discussion they'd had on the phone Friday with the White House Counsel's Office involving executive privilege.

"You also raised the issue of executive privilege. While you represented on the phone call that the White House does not believe that the entirety of Dr. Hill's testimony is subject to executive privilege, you noted your position that certain areas of her potential testimony may be subject to that privilege," the letter stated. "The first area consisted of 'direct communications with the President.' The second area consisted of 'diplomatic communications,' such as 'meetings with other heads of state' or 'staffing the President on calls with foreign heads of state.' "

Her attorneys noted that the President has discussed the July 25 phone call and other elements of the investigation publicly and again reiterated that their client would abide by secrecy rules, but noted legal precedent that states "that deliberative process privilege 'disappears altogether when there is any reason to believe government misconduct occurred.' "

Prior to joining the administration in 2017, Hill worked for the Brookings Institution, where she directed the Center on the United States and Europe form 2009 to 2017.

According to the think tank, before she joined the organization, Hill served as a national intelligence officer for Russia and Eurasia with the National Intelligence Council. She also oversaw strategic planning at The Eurasia Foundation and for some time worked at Harvard University's John F. Kennedy School of Government, the organization said.

A critical biographer of Putin, Hill has authored or co-authored a number of books on Russia, including two editions of a book titled "Mr. Putin: Operative in the Kremlin."

CLARIFICATION: This story has been updated to reflect additional information that Hill was involved with a debate about the substance of a call between Trump and Zelensky but not planning for the July 25 call that occurred.