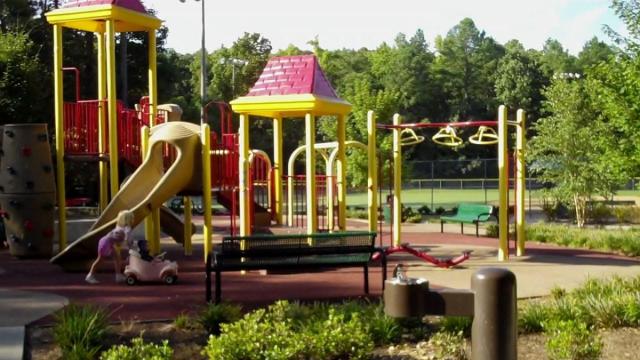 I got a question on Twitter about a week ago from a mom looking for something other than mulch or sand surfacing at Raleigh parks.

We're talking the rubberized surfacing that I pointed out in my review of Cary's Ritter Park on Friday. Many parks in Cary have this surfacing. And there are other parks in the area that have them as well. But this mom was looking specifically for parks in Raleigh.

I shot her a list with a couple. But here's the full list from the city's parks department. Some of the playgrounds have a poured in place rubber mat. Others have rubber tiles.

So if you're tired of pulling out sand or mulch from your kid's diapers, shoes and other crevices, here's the list, with addresses, what kind of surface it is and links to the two that I've reviewed so far:

The city has more than 60 playgrounds. And the rubber mats are more expensive than traditional sand or mulch surfacing. But city park staff tells me they are trying to move toward the rubber mats whenever possible.

The mom on Twitter asked specifically about Raleigh. So I'm starting here. But I'll check out other parks in the area as well. And feel free to post your favorites in the comments.