Fighting Over the Future of Inwood, Manhattan’s Last Affordable Neighborhood 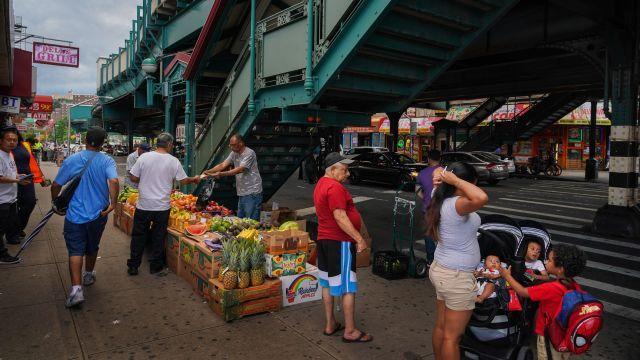 NEW YORK — There is a way of life in Inwood, a sense of place, order and community that is more than its surroundings suggest.

There are the lush parks, including the 196-acre Inwood Hill Park, the last natural forest in Manhattan, and the riverfront views. There are the streets filled with low-rise walk-up tenements.

And there is the diversity: Nearly half the residents here are foreign born.

Others speak of the Dominican culture evident in the shops and restaurants; three-quarters of Inwood’s almost 43,000 residents are Latino, and Inwood contains the highest concentration of Dominican residents in the city.

It is not as if Mayor Bill de Blasio wants to damage or alter the neighborhood’s character in any way. Yet, as part of his plan to rezone up to 15 neighborhoods across the city, to facilitate the construction and preservation of 300,000 units of affordable housing by 2026, Inwood — and some residents fear, its way of life — stands in the way.

The rezoning of 59 blocks in Inwood — often referred to as the last affordable neighborhood in Manhattan — has been in the planning stages for almost three years.The City Council zoning subcommittee and the Land Use Committee approved the rezoning last week, and the full council is expected to take up the issue Wednesday.

The new zoning would dramatically reshape the now largely industrial area east of 10th Avenue and allow for buildings between 18 and 30 stories tall that would include a mix of market-rate and affordable housing.

The city says the proposal would create and preserve 4,100 units of affordable housing, including the creation of 925 affordable units on city-owned land.

An additional 675 units would be created in the market-rate buildings because mandatory inclusionary housing rules require developers to build affordable housing into new projects made possible by rezoning. Over the next five years, the city is also pledging to preserve 2,500 units of existing affordable housing in Inwood.

City officials say the rezoning will combat the gentrification that is already occurring in the neighborhood. While many of Inwood’s units are rent regulated, rents in Community District 12, which includes Inwood, Washington Heights and Marble Hill, are increasing at a faster pace than the city as a whole.

The median rent in the district increased 38 percent between 2002 and 2014, compared with 24 percent citywide.

But some Inwood residents have made it clear they will continue to fight because they believe the soul and character of their neighborhood is at stake.

“The people who have been displaced from all these other neighborhoods end up here because we still have affordable housing available,” said Jeanne Ruskin, 71, an actor and teacher who first came to Inwood when she was 10 to visit relatives from Europe and has lived on Seaman Avenue and Dyckman Street for 37 years.

“You talk to people on the street that you meet, and they’ve moved up here two, three years ago from Williamsburg, from Long Island City, from Harlem,” Ruskin said. “Where will we go? This is the last bastion.”

There have been several protests in the neighborhood as the City Council vote approaches, including a sleep-in last week at the district office of City Councilman Ydanis Rodriguez, who supports the plan. One protester was arrested, and two others locked themselves in a bathroom in an effort they called #OccupyYdanis.

“It’s not over until it’s over,” said Nova Lucero, an organizer with the Met Council for Housing, who is the lead organizer of the Northern Manhattan is Not For Sale Coalition.

Rezoning has been approved in four other low-income and mostly minority neighborhoods and has proved to be equally controversial. Residents in neighborhoods such as East Harlem and East New York say they already faced displacement because of rising housing costs and argue that the changes would bring an increase in market-rate apartments and speed up the process of gentrification.

Cheramie Mondesire, 71, a retired teacher, purchased a co-op in Inwood 43 years ago and is against the rezoning. She still remembers a conversation with a city planner at one of the earliest rezoning workshops.

“He said: ‘Don’t think you can keep this nice neighborhood all to yourselves,'” Mondesire recalled.

Opponents of the plan say the rezoning is not contextual and does not line up with the character of the neighborhood. Most of the units in those buildings will be market-rate and bring in residents no longer interested in patronizing the beauty salons, Dominican barbershops and specialty food shops that cater to immigrants, they say.

“You really lose the culture of the neighborhood, the character of the neighborhood,” said Josmar Rojas, 39, a personal trainer who moved to the United States from the Dominican Republic and has lived in Inwood since 1992. “It’s not going to be the same individuals living here.” Because fewer than 200 new units of housing have been built in Inwood over the last 20 years versus the 67,000 built in Manhattan, the pressure on affordability will only increase, said James Patchett, president of the Economic Development Corp.

“I think the gentrification has been happening already,” de Blasio said on Friday during his weekly appearance with Brian Lehrer on WNYC.

“When the government steps in and creates some rules, and some boundaries and some guarantees of affordability, it actually rebalances the equation in favor of the people,” de Blasio added.

The rezoning will also bring $200 million in public investments to the neighborhood, such as more than $50 million in improvements to the George Washington Educational Campus, including a new science, technology, engineering and mathematics curriculum.

The city will redevelop the Inwood library into a new 20,000-square-foot facility with 175 units of affordable housing, prekindergarten classrooms and community space. By reclaiming city-owned property, the city will create access to the waterfront at North Cove, just south of the 207th Street rail yards, and with a new 2-acre park on Academy Street, east of 10th Avenue.

Rodriguez, the local councilman, said he voted for the plan because it struck the best compromise between preserving Inwood while bringing in necessary affordable housing and improvements.

Rodriguez negotiated to have a business area known as the “Commercial U,” which stretches along Dyckman Street, Broadway and West 207th Street, removed from the rezoning because of constituent concerns that the rezoning area was too large and could hurt small businesses. The allowed density was also decreased on blocks with large concentrations of rent-regulated housing to reduce the incentive to redevelop the parcels.

“These negotiations are an opportunity to bring many of the resources we currently lack in our neighborhood,” Rodriguez said.

But opponents say it is not enough. Even though the commercial district was removed from the plan, the current zoning will still allow property owners to combine parcels and build tall buildings, spurred by the growth of the new high-rise residential area east of 10th Avenue.

They say the height of new developments should be capped and have deeper levels of affordability, and they assert that improvements to the area should not be tied to the rezoning.

“We are trying to create responsible development without driving speculation and preserving the culture of the neighborhood,” Lucero said. “This plan is going to create a shift.”

For Rojas, that shift is already underway. He and his fiancée, Anamiledys Rosario, 33, a clinical social worker who moved to New York from the Dominican Republic in 1990, were recently displaced from their rent-stabilized Inwood apartment.

The couple was going to pay nearly $1,800 for a one-bedroom apartment on Dyckman Street, but chose to move in with Rojas’ parents in Inwood to save money to buy a home.

“We wanted to stay here, raise our kids here. We know everyone here. It feels like we’re in D.R.,” Rosario said using the initials for the Dominican Republic. “If you want to make the neighborhood better, really, it’s about preserving it.”