Fight Fire With Fire, or Be Civil With Trump? The Obama Coalition Is Unsure 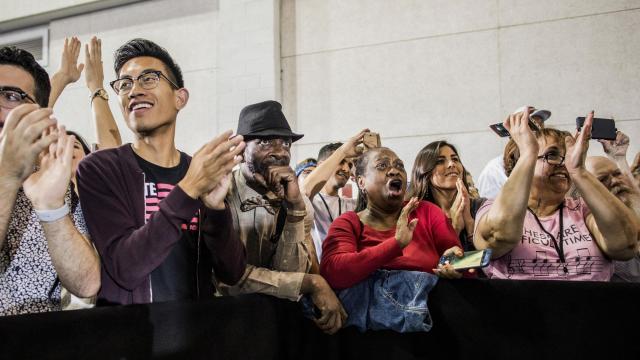 Toles-Bey, a 62-year-old small-business owner, voted for the former president twice, after never participating in elections in his life. He now follows politics incessantly, an obsession he credits to Obama’s influence. He started a T-shirt company called You Can’t Trump God after Obama left office, because President Donald Trump’s election sent him into a downward emotional spiral that only religion could counteract.

But even as Toles-Bey waited outside one of Obama’s recent rallies, he wondered aloud if his political hero’s signature idealism had a place in today’s flame-throwing political climate.

“It’s a different world we’re living in,” Toles-Bey said. “And we need something different.”

As Obama has crisscrossed the country in support of Democratic candidates, nerves are rattling among some members of the coalition that fueled his historic rise from backbencher in the Illinois Statehouse to America’s first black president.

A week of domestic terrorism has shocked the political system ahead of the 2018 elections. And while Obama’s speeches this election cycle have largely stuck with his trademark themes of idealism and hope, some of his supporters wonder if they are witnessing a living time capsule from a bygone era of civil political rhetoric.

Obama remains the top Democratic surrogate in the country, and he will be lending his star power to some of the most closely watched Democratic candidates during the campaign’s final week, including Andrew Gillum in Florida, Stacey Abrams in Georgia and Joe Donnelly in Indiana.

But the election of Trump has tested the former president’s theory of measured change, his advisers acknowledge. It has also jaded some of the legions of voters Obama brought into the Democratic fold, including young people and minorities.

Obama’s advisers say the former president sees “resisting" Trump and inspiring voters as a false choice. They point to his speeches this summer that broke with long-held tradition by heavily criticizing Trump, even if he rarely mentioned the current president by name.

Still, like Toles-Bey, some supporters of Obama have come to want a fist, not a handshake, in an era when the new generation of progressives is hitting back harder at Trump than the former president usually does.

“For a long time, older generations have told us, ‘This is how politics is supposed to work,’ but we’re pushing back on that,” said Gabriella Lorance, 20, who went to see Obama with her two friends in Milwaukee. She was 10 when he was first elected president.

They took a moment to list their favorite politicians: Jason Kander, the former Missouri secretary of state; Beto O’Rourke, the Senate candidate for Texas; and Sharice Davids of Kansas, a former mixed martial arts fighter who could become the first lesbian Native American elected to Congress.

Obama did not make the cut.

“There has to be a reframing of how we go about making change,” said LaTosha Brown, an organizer and co-founder of Black Voters Matter. She said that although she respected Obama, particularly because he was a former community organizer, she had come to see him as a “constitutionalist” in a political era that requires more radical action. “Enough is enough,” Brown said. “We’re not going to repeat the same cycle of people telling us to wait and vote and prove our allegiance to this country.”

The divide could be a preview of future fights among liberals. In the coming years, as voters search for Obama’s successor as the unifying face of the Democratic Party, questions over what tone is best to oppose Trump will be front and center, just as critical as issues of policy or ideology.

This year alone, some prospective contenders for the 2020 Democratic presidential nomination have raised eyebrows for their willingness to take anti-Trump rhetoric to new levels. Former Vice President Joe Biden said he would “beat the hell” out of Trump in a fight (he later apologized), and Michael Avenatti, a lawyer who has repeatedly clashed with Trump, challenged a member of the president’s family to a physical altercation.

Eric Holder, the former attorney general who served under Obama and is eyeing a run for president, caught the ire of Obama’s network when he took a more dark spin on the famous Michelle Obama line, “When they go low, we go high.”

“When they go low, we kick them,” Holder said in Georgia this month. “That’s what this new Democratic Party is about.”

Obama’s speeches are littered with appeals to conservatives, and in Milwaukee he oscillated between indicting the modern Republican Party and appealing to those he called “compassionate conservatives” interested in building a coalition.

But the next generation of Democrats may forgo such wavering in favor of a more uncompromising tone. In the last week, amid an eruption of political violence, two members of that new group of progressive Democrats stood out for their forceful language: Alexandria Ocasio-Cortez of New York and Rashida Tlaib of Michigan.

“Imagine if it was ISIS that sent bombs to US officials, started shooting in grocery stores, and invading places of worship,” Ocasio-Cortez tweeted. “How do you think this administration would respond?”

“Blaming the Pittsburgh shooting on #TreeOfLifeSynagogue members shows your lack leadership & compassion to be POTUS,” she said, in a tweet that included two explicit phrases directed at Trump. “The terrorist had an AR-15 assault rifle (weapon of war)& killed fellow Americans, human beings that deserve better.”

Michelle Obama has defended her “going high” mantra, saying that leaders have a responsibility to show a “level of decency” and that “fear is not a proper motivator.”

Valerie Jarrett, a close adviser to Obama, said in an interview that he understands the frustration among Democrats during Trump’s administration. Jarrett said that while it might be “harder” for the president to try to “appeal to our better angels” during this political time, it remained necessary.

Obama “wouldn’t be who he is if he were to change his message now,” Jarrett said. “The question isn’t just, do you give people what, in a moment, they think they want to hear? You give them the message that you think is important for them to hear. That’s what leadership is about.”

Some of Obama’s supporters agreed with Jarrett. Kasey Dean, 28, who waited for Obama before his rally in Nevada last week, said it was the duty of politicians to uplift the country in moments of uncertainty — not to sink to fear. Hallie Sebena, 34, who saw Obama’s rally in Milwaukee, said “there are ways to fight back without being dirty.”

“We need conversations that begin from a place of civility,” Sebena said.

Other liberal voters said they had been so enraged by Trump’s administration that it changed what they look for in a Democratic messenger.

Maybe it should be someone who is more of a “fighter,” said Tom Mooshegian, 64, in Las Vegas. Trump “sets the norm,” Mooshegian said, adding that “the person who runs against him in 2020 is going to have to match that.”

Dana Williams, 41, who was waiting for Obama with her husband and daughter in Las Vegas, said she thought Trump had introduced a style of politics that prioritizes personal attacks. To combat him, Democrats may need to meet “fire with fire,” she said, borrowing a favorite phrase of Trump’s.

“When they go low, we got to go hard,” said Brown, adding that she was not convinced “people in high offices” understood the urgency of the moment.

Obama did not publicly respond to Holder’s comments, but repeatedly in his speeches this summer, the former president has made an impassioned plea for his brand of politics: hopeful, civil and driven by incremental progress.

“There’s something at stake in this election that goes beyond politics,” Obama said in Milwaukee last week. “What is at stake is a politics that is decent. And honest. And lawful. That tries to do right by people and that’s worthy of this country we love.” Obama, who avoided the political arena for more than a year before returning this summer, has focused his efforts on states where Democrats are facing key races in the Senate. He also tends to hold rallies in urban areas with voters who are historically less likely to vote in midterm elections, including young people and minorities.

Jon Favreau, a former speechwriter for Obama who now runs a liberal media company, said the former president’s message has evolved on key issues such as voter suppression and structural racism. The Republican Party has become more overtly tied to white identity politics and immigration reduction, Favreau said, and Obama has become more explicit in his indictments. In doing so, he has laid out a pathway for how Democratic candidates can criticize while not resorting to mudslinging.

Favreau said campaigns like Gillum’s in Florida, Abrams’ in Georgia and O’Rourke’s in Texas were “the next generation and the next iteration of that Obama message of hope.”

“If you are only fighting Donald Trump, and if you’re only fighting Republicans with whatever sick burn you can figure out, you haven’t done the full job,” he said. “What voters want is people to fight on behalf of issues.”