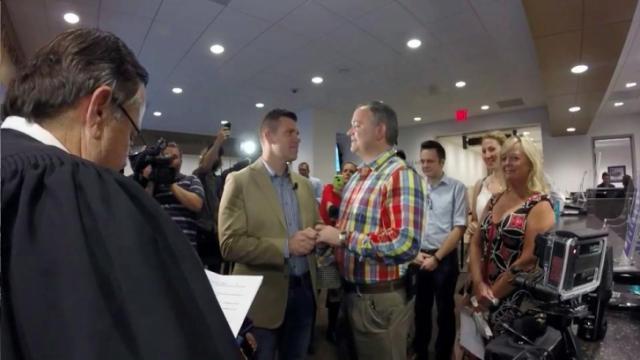 By Laura Leslie and Matthew Burns

Raleigh, N.C. — Only 2 percent of North Carolina magistrates have taken advantage of a new state law allowing them to express their opposition to same-sex marriage by opting out of performing all weddings.

Senate Bill 2 was adopted on June 11 after lawmakers overrode Gov. Pat McCrory's veto of the measure. The law allows magistrates and staffers in county register of deeds offices to opt out of presiding at weddings or issuing marriage licenses, respectively, for a "sincerely held religious objection." Although the recusals cover all weddings for at least six months, the legislation has been widely read as a way to give legal cover to those who object to gay marriage.

Supporters say the law protects the religious rights of magistrates and county employees, but critics say it allows public servants to decide which of their job duties to perform and for which taxpayers to perform them.

According to the Administrative Office of the Courts, 14 of the state's 672 magistrates had requested recusals through Monday.

A magistrate or register of deeds staffer doesn't have to opt out in advance, however. He or she can refuse to serve a couple at the time they go to obtain a marriage license or go before the bench for a civil wedding.

No details were released regarding which counties are affected by the opt-outs. Under state law, the chief District Court judge in each county must assign someone to perform weddings in a magistrate's absence to ensure all couples who want to be married can be married. Each county must be prepared to offer civil ceremonies for at least 10 hours a week over at least three weekdays, according to the law.