Raleigh, N.C. — North Carolina's hog industry is facing a threat from overseas: A disease that has the potential to wipe out entire farms.

The threat of contamination from African swine fever (ASF) has prompted changes on the part of Tony Ballance.

He doesn't allow visitors to go far on his Wayne County farm.

The disease is highly contagious and deadly to pigs.

"It would quite likely put several of us out of business, myself included," he said.

U.S. inspectors have implemented a huge effort to keep African swine fever out of the country, by checking what comes across America's borders for contamination.

"The number one goal is to keep it out of this country," said Chester Lowder, public policy and livestock director for the NC Farm Bureau.

The disease started in Africa before moving through eastern Europe, Russia and now China.

Experts expect it to take out a third of China's hog population this year.

That is almost the size of the hog populations in the U.S. and Europe combined.

Chester Lowder says if the disease made it to America, much of North Carolina's pork industry would likely grind to a halt.

However, if American farms can avoid the disease, it could pay off big for North Carolina because it could mean higher demand for the state's pork products.

"Things are looking up, provided we can keep these farm animal diseases out of here," said Tony Ballance, who manages Ballance Farms Inc.

Sun Dawu's pigs started dying from a mysterious virus last December. Four months later, all 20,000 in one farm were dead.

"It began with a few pigs a day, then it was hundreds," said Sun, a pig farmer and agricultural entrepreneur from Hebei province, China. "In the end, 800 pigs would die in a single day." 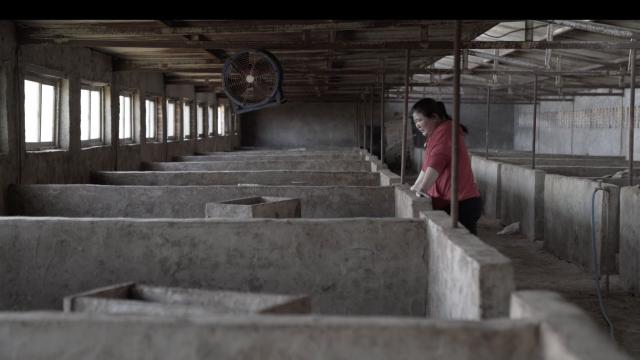 African swine fever is decimating China's pork industry, by far the biggest in the world. Dutch bank Rabobank, which lends to the global agricultural sector, estimates the country's pig population could shrink by a third in 2019 -- up to 200 million animals -- through a combination of the disease and culling.

To put it in context, that's almost as many pigs as in the US and Europe combined.

The virus is harmless to humans but deadly to pigs -- and, so far, there is no cure or vaccine. Originating in Africa, outbreaks were recorded in eastern Europe and Russia before it first appeared in China last August.

It has since spread to other Asian countries, including Vietnam and Cambodia.

In March, the Chinese government said it had a "good control" of the epidemic. At a press conference last month, Beijing said ASF was not spreading as quickly as before.

According to the United Nations' Food and Agriculture Organization (FAO), China's central authorities have taken the right steps to bring the virus under control.

"They've done everything they could possibly do to control the disease. They had a plan, they had a strategy, they have been responding very vigorously," said Vincent Martin, the FAO representative in China.

But the scale of the outbreak may be bigger than officials estimate, as some farmers tell CNN that the disease is not always recognized locally.

Sun said initial testing by provincial officials at his Hebei farm was negative for ASF. However after he posted pictures of the dead animals online, the country's Disease Prevention and Control Center tested them and confirmed they carried the virus.

Also in Hebei, fellow farmer Zhang Haixia watched all her 600 pigs die. The official cause of death, she was told, was a regular swine influenza.

"The local officials were afraid to be accountable," she told CNN. "They threatened us that there would be consequences if we reported to higher-ups in the government. They are afraid of losing their jobs because of this."

CNN has contacted authorities in Hebei for comment but has not received a response.

Martin, from the FAO, warned that it could take years before the outbreak was completely contained.

"I'm not sure we can say it is under control because we know how complex the disease is," he said. "We have experience in other countries where it took years to get a handle on these diseases."

Not enough pork in the world

One of the main problems China faces in containing ASF is that its pig industry is fragmented. Martin said there are thousands of small farms which may not have the correct bio-security measures needed to control the spread of the disease.

Another complication is that the virus can survive in pork products for months, meaning it can be reintroduced into herds by accident.

And it's not just producers who are hurting. The epidemic could also have a broader economic impact: China is the world's largest consumer of pork, a staple for the vast majority of its 1.4 billion people.

According to government forecasts, the price of pork could rise to record levels in the second half of 2019, as demand overwhelms supply.

Analysts say there isn't enough pork in the world to cover China's expected shortfall and consumers are likely to turn to other meats as a substitute.

Rabobank's report predicts an "unprecedented" shift in global protein supply to China to cover the shortfall.

Pork producers in Europe and the US are already starting to increase shipments to China, even though US exports are subject to a 62% tariff because of the trade fight with China.

In the lunar calendar, 2019 is the year of the pig. It's supposed to be an auspicious year. For China's pork industry, it's anything but.

Andrew Stevens and Lily Lee from CNN contributed to this report.


Copyright 2019 by WRAL.com and CNN. All rights reserved. This material may not be published, broadcast, rewritten or redistributed.