Female officers make their mark in departments around the Triangle 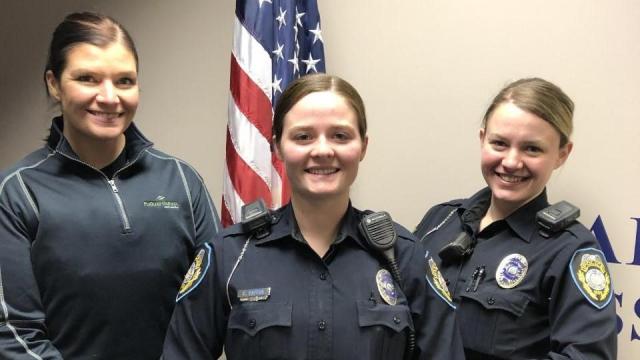 In 2019, just 13 percent of full-time law enforcement officers were female. While women make up a much smaller portion of police departments than their male counterparts, they often bring a unique and positive impact to the communities they serve and their importance is key.

Detective Kerry Campagna of the Knightdale Police Department didn't always want to be an officer. In fact, she already had a career in emergency medical services.

After encountering scenes she knew would benefit from both a police presence and a medical presence, she decided to go back to school for criminal justice.

"When someone calls 911 for an ambulance or police or fire, usually it's not a good day for them. For some reason, something intrinsically in me just wanted to be a person who was there for those people who are having the worst day of their life," said Campagna. "While I was on patrol, I spent a significant amount of time staying on scene. Not just to mitigate the initial issue of what was going on, but really try to dig deep and help the people."

Campagna has been with the Knightdale Police Department for four years, the first two of which she served as a patrol officer. Now, she's made the transition to detective, primarily investigating property crimes.

While Campagna has a few years on the force under her belt, there are plenty of female officers around the Triangle who are just getting started.

In Garner, officer Abbi Cruz was hired at the beginning of 2020 after completing her Basic Law Enforcement Training at Wake Tech Community College. Like Campagna, she's getting her start as a patrol officer.

"When I first started, everyone at the police department was very welcoming to me and willing to help — that was a big help to me. It's a little harder to find Hispanic officers these days, so sometimes we'll get calls that specifically request having a Hispanic officer on the scene," said Cruz. "Sometimes they don't know the laws themselves or they need someone who speaks Spanish. I've always told my sergeant that I'm trying to build a bridge between us, and being able to help with my language is one of the parts of the job I like most."

Both Cruz and Campagna recognize law enforcement is a male-dominated field, and both also see women bringing a valuable element to the force. Campagna noted the empathy women tend to have as an asset, something she cultivated while being a patrol officer.

While both women admit empathy is not a one-size-fits-all women attribute, they see this quality as one of the major ways women can bring something beneficial to the job.

"Typically speaking, from what I've seen and dealt with both personally and professionally, women are more empathetic human beings, and I think that is the biggest asset of having women in law enforcement," said Campagna. "There are certain calls where I believe empathy is really what's needed to resolve the issue instead of other ways of approaching it, which can lead to escalation. The feminine mindset is definitely a pro in some situations surrounding law enforcement."

"Females do have a different perspective than males do, and we bring a different mentality to policing. I know sometimes when people see a female officer, they feel more comfortable; and I even recently had a case where they specifically requested a female officer," said Cruz.

That softness can be a double-edged sword, however. But for Cruz, it's all about how you handle yourself.

"Hold your ground and don't let somebody else make you feel that you're not capable of doing the job because you're female," she said. "A lot of the time, women have to be able to prove that we're just as tough as the men are. My squad knows I'm capable of handling myself, but I still try to prove it every day."

Neither Cruz nor Campagna have felt pushback from anyone on their force, but like Cruz, Campagna acknowledges there are steps you can take to feel more comfortable as a woman in a male-dominated field.

Since women are typically smaller than male officers, there can be some physical difficulties when dealing with certain suspects. In order to overcome those obstacles, Campagna recommended taking advantage of the training opportunities departments have to offer.

Departments are always in need of more women on the force. In fact, Cruz's younger sister is considering following in her sister's footsteps and joining law enforcement.

"I told her, if this is a job you really want to do, you have to go ahead and start preparing yourself for it now, physically and mentally. You won't really know what the job is like until you're actually working, and this might not be the job for you, but don't let anyone discourage you," said Cruz. "Prove to yourself that you can get in and get through the Academy and get hired. Then, you've already shown you're capable of getting the job, so don't let anyone put you down telling you that you can't."

While Cruz is just getting her feet wet on the force, Campagna has enough years under her belt to know this is exactly the place she wants to be for years to come. There are certainly struggles that come with being a woman in law enforcement, but the rewards far outweigh obstacles.

"This is truly a career where there are only two main attributes you need to have to be successful. One is you need to have high moral standards — that is not debatable. The second part is, if you truly put the work in and work hard, there is nothing stopping you from achieving your goal. If you're a woman considering a career in law enforcement, just because you're entering a more male-dominated profession doesn't mean that you can't achieve your goals," said Campagna. "I'm truly happy in my position, and my goal is to stay happy and make a difference in people's lives. I have found my place in the department and I hope to continue helping in the department and in the community at large."