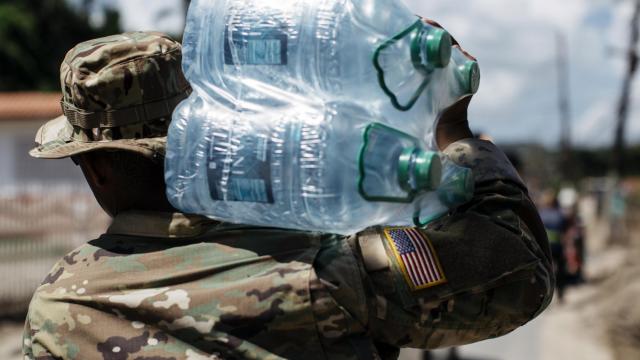 The prospect of food and water assistance coming to an end for Hurricane Maria survivors in Puerto Rico blindsided the island’s government this week, prompting angry reactions from local leaders and alarming lawmakers in Washington, who urged the Federal Emergency Management Agency to reverse course.

By Wednesday, FEMA had done so — except it said it had never intended to stop helping Puerto Rico in the first place.

The agency will continue providing aid to the storm-ravaged island for as long as it is needed, said William Booher, an agency spokesman. The uproar began when agency officials mistakenly told NPR in an interview published Monday that FEMA planned to cut off food and water assistance on Jan. 31.

“This aid is not stopping,” Booher said in an interview Wednesday. “There was no, and is no, current plan to stop providing these commodities, as long as there continues to be an identified need for them.”

According to Booher, Wednesday was not an actual cutoff point, but rather an internal planning date to evaluate if Puerto Rico could still justify needing assistance.

The confusion marks the latest blot in the federal government’s response to Maria, which was widely criticized as too small and too slow. More than four months after the storm, nearly a third of Puerto Rican power utility customers are still without electricity, and the island’s financial position remains shaky.

“Yesterday, I had to take to a school in Morovis, almost an hour outside of San Juan, water and powdered milk to a school that doesn’t have water or power or enough food for its children,” Mayor Carmen Yulín Cruz of San Juan told reporters in Washington on Tuesday.

President Donald Trump offered a brief moment of recognition for natural disaster victims in his State of the Union address on Tuesday, telling them, “We are with you, we love you, and we always will pull through together. Always.”

Booher insisted on Wednesday that FEMA was not backtracking on its food and water aid plans in response to public criticism. Had the agency planned to end the assistance, it would have required giving notice to the Puerto Rican government, Booher noted, and FEMA had no plans to end the aid without consulting with Puerto Rico.

A statement on Tuesday from Héctor M. Pesquera, the island’s public safety secretary, said that the government had not been informed about any cutoff before the NPR report.

Ending the emergency aid would require a transition of at least two weeks between the federal and Puerto Rican governments, Pesquera added. FEMA has been distributing water bottles, snack food boxes and ready-to-eat meals to Puerto Rican municipalities, where local mayors have handed them out to needy residents.

On Wednesday, Gov. Ricardo A. Rosselló told reporters in San Juan that his administration had reached out to the homeland security secretary, Kirstjen Nielsen, whose department oversees FEMA, to ensure the aid would continue. FEMA’s plans, Rosselló said, had been “perhaps miscommunicated.”

Puerto Rico intends to rely on mayors to let his administration know when their residents no longer need emergency food and water, Rosselló said.

“You can’t pretend to end it overnight,” he said.

The local FEMA workers cited by NPR on Monday — Alejandro De La Campa, the director of the agency’s San Juan-based Caribbean division, and Delyris Aquino-Santiago, a spokesman — mistakenly thought that the date being used in a planning exercise for what ending aid would look like was real, Booher said.

The reported cutoff date had baffled Washington lawmakers. While major cities like San Juan have had much of their power restored — allowing people to refrigerate their food — some towns in the island’s mountainous interior are still in the dark.

“Cutting this aid to the people of Puerto Rico, almost a third of them who still do not have electricity — it’s unconscionable, and it’s a travesty,” Sen. Bill Nelson, D-Fla., said on the Senate floor on Tuesday. Thirty lawmakers from both parties had signed a letter imploring FEMA to change course.

In clarifying FEMA’s position, Booher noted that the agency’s aid has become less necessary as supermarkets and restaurants return to regular business. The agency has full stockpiles of food and water to distribute to towns and does not need to bring new supplies to the island for now, he said.