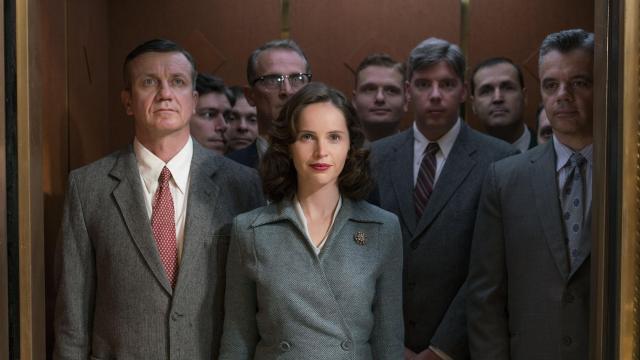 (CNN) — Even before Felicity Jones transformed into Ruth Bader Ginsburg for her new film "On the Basis of Sex," the actress felt a kinship with the Supreme Court justice.

"I think from the very beginning, I identified so much with Ruth's story and her feelings of being an outsider, being in the minority, being surrounded by a men and being one of a few women in that situation," Jones told CNN recently. "Growing up on film sets, that was often the case. I was used to being in the minority."

Jones has been acting since she was a child, starring in television series and TV movies.

In recent years, her star has risen quickly, thanks to roles in films like the Stephen Hawking biopic "The Theory of Everything" and "Rogue One: A Star Wars Story," in which she played a defiant female soldier on an important mission for the Rebel Alliance.

In "On the Basis of Sex," Jones one again plays a rebel female, but the battles are fought with books, not blasters.

The heroism is all the same, however, as Jones sees it.

"I think that's what's been so wonderful about the film -- is seeing the hope people have when they see it and they feel, 'Oh my goodness! You can stand up for what you believe in and you can change the world for the better," she said.

The movie primarily covers the early part of Ginsburg's law career, including a key early case relating to gender discrimination that challenged gender roles at the time.

"I mean, it almost sounds quite cheesy in a way, but there's something about Ruth Bader Ginsburg -- about her strength and her determination and her absolute integrity -- that gives us all hope that we can effect change," Jones said.

It's hope that people need right now, she added.

"I feel we don't have that many leaders currently who we really admire, and we feel have stuck by their beliefs," Jones said. "What's wonderful about Ruth is that she isn't a politician. She is someone who has consistently been fighting for her beliefs, not for money, not for fame. She's been guided by her belief in giving voice to those who don't readily and easily have a voice."

"On the Basis of Sex" is in theaters now.