‘Dreamers’ Win Round in Legal Battle to Keep DACA 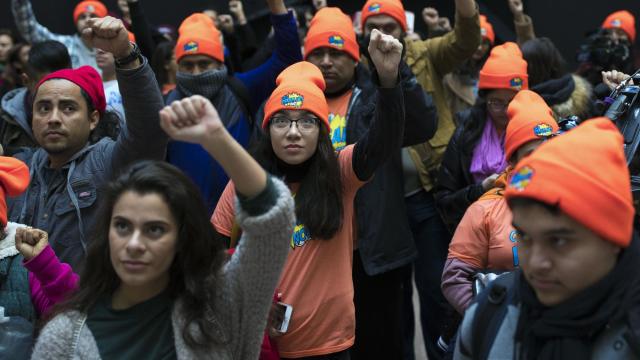 A federal appeals court on Thursday upheld a nationwide injunction against the Trump administration’s attempt to revoke deportation protections for some 700,000 young immigrants known as “Dreamers” who were brought into the United States illegally as children.

Jeff Sessions, who until Wednesday was President Donald Trump’s attorney general, announced in September that the Deferred Action for Childhood Arrivals program would end gradually over six months, prompting legal challenges and protests. Trump has criticized the program, known as DACA, as an “amnesty-first approach,” and said that President Barack Obama had overstepped his authority by introducing it.

Thursday’s ruling, from the 9th U.S. Circuit Court of Appeals, was the first time that a federal circuit court had weighed in at this stage on one of the country’s most contentious immigration issues. It brought DACA closer to review by the U.S. Supreme Court, which ultimately will have to resolve the various legal claims swirling around the program.

The review may already be on a faster track after the Trump administration earlier this week petitioned the Supreme Court to consider the issue immediately, without waiting for rulings in the lower courts. The Supreme Court in February had denied a previous request for expedited review, signaling that the justices at least at that point had preferred to wait for appellate courts to weigh in.

Legal challenges against the administration’s attempt to end DACA are pending in several states. After a series of lower court injunctions against the move, federal appeals courts have taken up the issue in New York, Texas, Washington and now California.

In their opinion Thursday, the circuit judges in San Francisco upheld a nationwide injunction imposed in January by Judge William Alsup of the Northern District of California, ordering safeguards from deportation to remain in place for those affected by DACA while the complex legal issues make their way through the courts.

The court consolidated three separate cases that were brought on behalf of the state of California, the University of California system and the beneficiaries of the program themselves. The judges rejected the arguments of government lawyers who contended that DACA had been introduced illegally by Obama in an act of executive overreach.

Instead, the court found there was a good chance the plaintiffs could succeed in their claim that the Trump administration’s abrupt attempt to rescind the program violated the Constitution’s equal protection clause, based on its disproportionate effect on Latinos.

“The Executive wields awesome power in the enforcement of our nation’s immigration laws. Our decision today does not curb that power, but rather enables its exercise in a manner that is free from legal misconceptions and is democratically accountable to the public,” the court wrote.

Obama introduced DACA in June 2012 in a Rose Garden ceremony as a stopgap measure to prevent the possible deportation of thousands of young people who had spent most of their lives in the United States. He said he had no choice but to act because Congress had failed to pass comprehensive immigration reform legislation. The program is unique among immigration policies in that it enjoys wide support from both Republicans and Democrats.

Janet Napolitano, a named plaintiff in the case brought on behalf of the University of California system, which she oversees, signed off on DACA as secretary of Homeland Security under Obama when the program was introduced.

Napolitano said Thursday that DACA was needed because the current immigration system was “terribly out of date and it doesn’t match up well with that the country needs now.” She estimated that about 4,000 unauthorized students are enrolled in the California system, most of whom, she believes, are enrolled in DACA.

In order to qualify for protections, participants are required to have a clean criminal record and to have finished high school or obtained a GED. The status must be renewed every two years. Because of the injunction, renewal applications are still being accepted, though new candidates cannot apply.

Mark Rosenbaum, a lawyer for Public Counsel, the nonprofit group that represented some of the plaintiffs, called the administration’s attempt to bypass the lower courts unprecedented.

“It is a rare and obvious act of disrespect to the whole federal court system to say that ‘We don’t need to wait for the appellate courts.’ It’s never been done in a case that did not involve some sort of national security interest.”

Rosenbaum said he hoped that the administration would give up on dismantling the program. “Nobody in the country is suffering because of the presence of the young people. There’s no imperative. This is just cruelty that serves no national purpose,” he said. The court decision brought temporary relief to people like Dulce Garcia, a 35-year-old beneficiary who is named as a plaintiff. Garcia is a lawyer in San Diego whose parents brought her to the United States from Mexico when she was 4 years old.

In an interview Thursday, she described the difficulties of growing up without legal documentation. Her family, she said, shared living spaces with other families and was homeless for a time.

For holiday breaks during law school in Cleveland, Garcia would have to ask someone to drive her from their home in San Diego to Los Angeles or Las Vegas, where she could catch a Greyhound bus — she could not fly without a passport, and the buses that leave from San Diego often travel through checkpoints where border agents review the documents of the passengers inside.

The circuit court’s opinion, written by Judge Kim McLane Wardlaw, took note of her story. “It is no hyperbole to say that Dulce Garcia embodies the American dream,” it said. “Whether Dulce Garcia and the hundreds of thousands of other young dreamers like her may continue to live productively in the only country they have ever known is, ultimately, a choice for the political branches of our constitutional government.”

“It just acknowledges that we’re American,” she said. “That we are here and that we have value, not just because we contribute so much to society or the economy or through our labor and taxes, but because we’re human and we dream.”