Fearing DACA's return may be brief, immigrants rush to renew 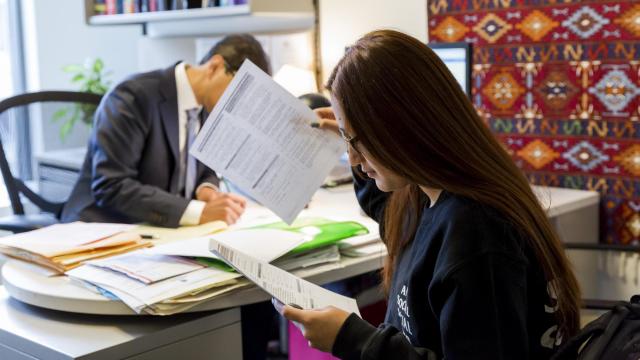 For Marcela Alcaide Eligio, Advanced Placement Biology class would have to wait. First, she had some paperwork to do.

On the first day young immigrants were able to renew the permits giving them temporary protection from deportation — as ordered by a California district court last week and authorized by the U.S. Citizenship and Immigration Services over the holiday weekend — Alcaide, 17, had booked the first appointment of the day at the Legal Aid Society of New York.

“I had to take my chance,” said Alcaide, whose permit for Deferred Action for Childhood Arrivals, or DACA, expires in May. “It’s always uncertain, so you have to do it as soon as possible.”

In Los Angeles, people started lining up at 2:30 in the morning on Tuesday for appointments to renew DACA applications at the Coalition for Humane Immigrant Rights of Los Angeles. The group only had 20 slots available, and by 8 a.m., staffers had to start turning people away and begin scheduling them for Thursday.

“I wanted to take this opportunity while the window lasts,” said Mario Hernandez, 29, who was whisked across the Mexico-United States border when he was a 1-year-old and raised in Los Angeles.

Hours later, his sense of urgency seemed prescient. The Department of Justice filed a notice of appeal on Tuesday afternoon in the 9th U.S. Circuit Court of Appeals, saying it intended to ask the Supreme Court later in the week to overturn the U.S. District Court’s ruling, which had enjoined the federal government from ending the DACA program, as it had planned.

With their fates split in the courts, in the halls of Congress, and, seemingly, the White House, DACA recipients across the country scrambled to do what was in their power.

Lawyers were urging their clients to apply as soon as they could, given the short window of opportunity that only seemed to get shorter on Tuesday. “We’re trying to schedule events as fast as we can,” said Camille Mackler, the director of legal initiatives at the New York Immigration Coalition, an advocacy group.

In New York, the Mayor’s Office of Immigrant Affairs was partnering with CUNY Citizenship Now! to offer two free clinics on Thursday and next Tuesday, while Make the Road New York, another immigrant advocacy group in the city, had filled all its slots for three Saturday events.

In Phoenix, a community organizing and advocacy group, Puente Arizona, had already helped prepare six applications on Monday, even though it was a federal holiday. On Tuesday the applicants only needed to put them in the mail — with a tracking number to avoid any problems with the U.S. Postal Service that plagued the renewal program in the fall, when more than 1,900 applicants were rejected for being late because of mail delays.

In some cities, though, the DACA push in response to immigration authorities reopening renewal applications was slower than others. Geoffrey Hoffman, the director of the immigration clinic at the University of Houston Law Center, said on Tuesday that the clinic had received only a handful of inquiries from DACA recipients. “It’s been very sparse,” Hoffman said on Tuesday. “I would say there’s still a fair amount of uncertainty with regard to whether these applications will be accepted,” he added.

But another legal services group in Houston said it had received 50 to 100 emails, calls and walk-in consultations since the federal judge’s injunction last week.

On Sept. 5, when the Trump administration announced that it was phasing out the DACA program, which grants the deportation protection and work permits to young people who were brought to the United States illegally by their parents as children, it allowed only those recipients whose benefits expired between Sept. 5, 2017, and March 5, 2018, to renew for a final two years.

According to the immigration agency, 132,000 out of the 154,000 people eligible to renew applied in the fall. But this time, anyone whose permit had expired since Sept. 5, 2016, or was canceled at any time could apply.

The immigration agency said that anyone whose permit expired in the next 120 to 150 days could reapply. It historically has accepted people as many as six months out.

In California, Luis Cruz’s permit expires in June, so after the administration canceled the DACA program in September, he stopped saving money from his job at a communications firm for the $495 application fee. That changed with last week’s court ruling.

The Coalition for Humane Immigrant Rights, known as Chirla, said it would cover the cost, to Cruz’s gratitude. “It’s done, sealed in an envelope and about to be express-mailed,” he said.

The lawyer for Alcaide in New York, Hasan Shafiqullah, the director of the immigration unit at the Legal Aid Society, said he sent an email to 950 former DACA clients on Monday, explaining the renewal process. He got only 10 responses.

By the end of Tuesday, he had sent out four applications via FedEx, paid for by Legal Aid in an effort to avoid the earlier mail problems.

Shafiqullah said that perhaps some of the unit’s clients did not need legal assistance with their applications because they have renewed twice already and were familiar with the process. For Alcaide, who came from Mexico when she was 2 years old, it was her first renewal. Her mother gave her the application fee from her savings from cleaning houses.

“It’s really exciting because I don’t have to fear anything else for two more years,” Alcaide said.

Now, she added that she will be able to apply for colleges in New York with more assurance that she can earn money to pay tuition.

But Shafiqullah had to caution her, as he has been doing for his other clients. The afternoon decision from the Department of Justice underscored why.

“The fact that this has started isn’t a guarantee that it will continue,” he told her across the desk, “but we’re hoping that those who manage to apply in time, even if there is an injunction, if you get your foot in the door, then they will honor that.”