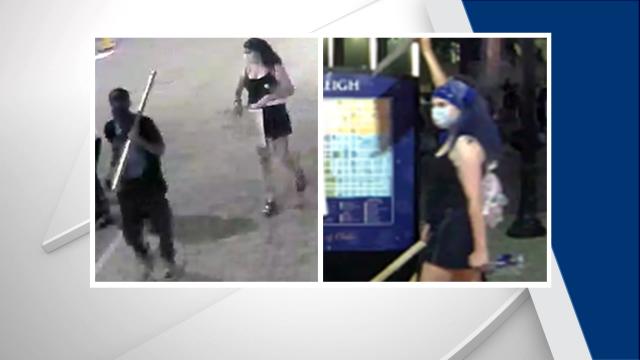 Raleigh, N.C. — Federal officials said Wednesday that they want to talk to two people involved in a May protest in downtown Raleigh that got out of hand and led to damage at two federal buildings.

Protests in downtown Raleigh in the wake of George Floyd's death in police custody in Minnesota days earlier escalated into riots on May 30 and May 31. Businesses were vandalized and looted, and numerous fires were set downtown. Law enforcement deployed tear gas and fired rubber bullets to disperse the crowds.

The FBI and the Federal Protective Service division of the Department of Homeland Security said a woman and a man seen in footage from numerous security cameras downtown on May 31 may have information about the damage to the two federal buildings.

Anyone who can identify either individual or who has information about the damage to the buildings is asked to call the FBI Charlotte Field Office at 704-672-6100.