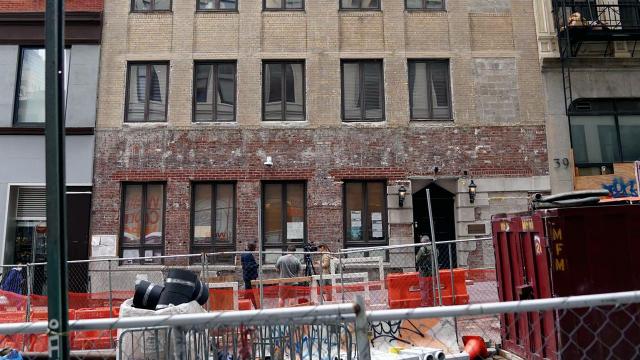 NEW YORK — Federal investigators on Tuesday raided the Manhattan office of one of New York City’s main police unions in connection with a continuing investigation, according to two people with knowledge of the matter.

In a statement late Tuesday, the union, the Sergeants Benevolent Association, acknowledged the search and said that its president, Edward D. Mullins, was “apparently the target of the federal investigation.”

The union, which describes itself as the fifth-largest police union in the United States, added in the statement that “given the severity of this matter and the uncertainty of its outcome,” its executive board had asked Mullins to resign and that he had complied.

The union represents about 13,000 active and retired police sergeants in New York. Its headquarters were searched as part of an investigation by the FBI and the public corruption unit in the U.S. attorney’s office in Manhattan, the people with knowledge of the matter said.

In its statement, which was issued by the executive board, the union said it had “no reason to believe that any other member” was “involved or targeted in this matter.” The union’s assertion could not immediately be verified and the precise focus and scope of the investigation could not be determined.

The FBI spokesperson, Adrienne Senatore, said only that agents “were conducting a law enforcement operation pursuant to an ongoing investigation” at the union’s offices and Mullins’ home. A spokesperson for the U.S. attorney’s office declined to comment.

Federal agents spent hours inside the union’s headquarters, where they lowered dark wooden blinds and placed pieces of cardboard inside windows to prevent the public from gazing in.

Agents carried at least 11 large cardboard boxes and a black trash bag out of the offices. The contents were unknown, though inside one box were at least two folders labeled “evidence” and what appeared to be a large computer hard drive.

Neither Mullins, an outspoken figure who has run the union since 2002, nor the union’s lawyer, Andrew C. Quinn, responded to messages seeking comment about the raid, which was reported earlier by The New York Daily News.

Although the organization he leads is significantly smaller than the Police Benevolent Association, the nation’s largest police union, Mullins has received outsized attention over the years, thanks in part to his bluster and willingness to engage in online provocation.

He has made brash and incendiary remarks on Twitter about Mayor Bill de Blasio and other local officials, declaring war on the mayor last year after two officers were shot and accusing de Blasio of promoting anti-police attitudes.

Mullins is being brought up for department discipline over other posts on Twitter, including for sharing a police report documenting the arrest of de Blasio’s daughter, Chiara, during protests over police brutality and racial justice in New York last year. The Police Department does not typically release internal reports, and the one that Mullins shared contained personal information about Chiara de Blasio.

A hearing on the charges started last month but was postponed after one of Mullins’ lawyers had a medical issue. The Police Department’s disciplinary trial calendar shows another hearing set for Oct. 27.

Mullins’ lawyer, Quinn, has defended his conduct as free speech and as part of his obligation to advocate on behalf of the union’s members.

The mayor declined to comment on the raid at a news conference Tuesday, saying he did not know any details, but he said that Mullins had long been a “divisive voice” whose behavior had been “destructive.”

The departmental charges against Mullins also stem from tweets in which he used profane language against Dr. Oxiris Barbot, the former city health commissioner, and Rep. Ritchie Torres, a Democrat who represents the Bronx.

Torres, who has called for Mullins’ resignation over what he has described as racist, misogynistic and homophobic remarks, tweeted Tuesday that Mullins had received a “first-class raid” from the FBI.

Mullins, who grew up in Greenwich Village, joined the Police Department in 1982 and spent the early years of his career in the 13th Precinct, which covers the Flatiron and Gramercy neighborhoods in Manhattan. He was promoted to sergeant — a midlevel supervisory role — in 1993.

After first winning election in 2002, Mullins is now serving his fifth term as president. Over that time, his union has become a forceful opponent against police reform efforts, with Mullins serving as its vociferous figurehead.

At times, Mullins’ penchant for edgy remarks has found its way into the union’s messaging as well. In 2017, just days after a white nationalist rally in Charlottesville, Virginia, turned violent, the union released a video complaining that police officers were frequent victims of discrimination, which the union clip called “Blue Racism.” Backlash was quick, and Mullins acknowledged the word choice was poor.

In an interview with The New York Times opinion section Friday, Eric Adams, the Democratic nominee for mayor and a former New York police captain, was asked about a video Mullins reportedly emailed to union members in 2019 in which a narrator calls public housing projects “dens of crime and violence” where “Blacks will continue to attack and ambush us forever.”

In response, Adams said, “You’re seeing as we redefine public safety in this country, what are you watching? You’re watching a high level of retirement.”

“Men and women who can’t fit into this new mode of policing are going to find themselves going the way of the dinosaurs,” he continued. “And you will adjust or you will be removed from law enforcement in the city and in this country.”

In a city where Democrats significantly outnumber Republicans, Mullins has drawn scrutiny for his outspoken right-wing politics. Both the sergeants’ union and its larger sister union, the Police Benevolent Association, have been run mostly by conservatives whose views are not widely shared by many in the metropolis they police. Mullins has praised former President Donald Trump, a Republican who was deeply unpopular among city residents. In February 2020, he visited the White House for what he said was a conversation about the “plight of police officers in NYC.” Trump, he said on Twitter, “has our backs!”

Mullins has made regular appearances on conservative news shows, where he has attacked de Blasio and Andrew Cuomo, the former governor of New York, saying they turned their backs on police officers.

He also came under fire from liberal lawmakers after giving an interview to Fox News with a mug bearing a symbol linked to QAnon, a conspiracy theory popular among Trump supporters, displayed in the background.

Little was known late Tuesday about his business dealings outside the police union. Records show he was affiliated with at least one private company, K-9 Night Watch Inc., which appeared to be based out of his home in Port Washington, but the nature of the company’s business was not clear. Tuesday was not the first time that a police union in the city has been the subject of an investigation. In the 1990s, federal investigators indicted several leaders of a now-defunct union that represented transit police officers, accusing them of taking kickbacks and engaging in racketeering schemes.

In 2000, a veteran detective who served as treasurer of the Detectives Endowment Association was arrested and later convicted of steering union pension money into mob-related investments.