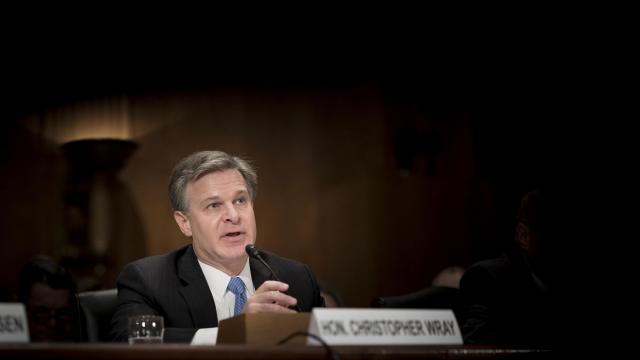 WASHINGTON — FBI Director Christopher A. Wray defended the bureau’s handling of an abbreviated background check into Justice Brett M. Kavanaugh, telling lawmakers on Wednesday that agents acted properly amid criticism that they should have more thoroughly investigated sexual assault allegations against him.

As part of a dramatic deal to move Kavanaugh’s nomination forward in the Senate two weeks ago, the White House directed the FBI to conduct a narrow investigation that was “specific in scope,” Wray told members of the Senate Homeland Security Committee during a hearing.

“That is consistent with the standard process for such investigations going back quite a long ways,” he said.

Wray’s remarks were his first public comments about the FBI’s role in the background investigation, and he tread carefully. Confirmed 14 months ago to replace the fired James B. Comey, Wray has tried to keep the FBI out of the cross hairs of President Donald Trump, who has relentlessly attacked the Justice Department’s investigation into Russia’s election interference and whether any Trump associates conspired.

The hearing thrust Wray into a difficult spot. If he said the FBI could have done more but was limited by the White House, Wray might have been seen as criticizing the president or confirmed Democratic accusations that the White House was uninterested in a close examination of the allegations against Kavanaugh. If Wray said the FBI had opted on its own not to conduct additional interviews, he would have opened the bureau to intense criticism.

The background check was reopened amid the bitter partisan fight over Kavanaugh’s nomination, one day after both he and the first woman to accuse him of assault, Christine Blasey Ford, testified for hours before lawmakers. Blasey has said that Kavanaugh drunkenly tried to assault her when they were both teenagers.

Kavanaugh has vigorously denied her account as well as allegations by two other women. One of them, Deborah Ramirez, has said Kavanaugh exposed himself to her during a night of drinking when they were both students at Yale. The third, Julie Swetnick, said that Kavanaugh engaged in sexual misconduct at parties while he was a teenager.

Asking the FBI to look into the claims, Republican senators provided the White House counsel, Donald F. McGahn II, and Wray with a list of people to interview and requested that the inquiry be completed in a week. Democratic senators countered by asking the FBI to “perform all logical steps related to these allegations.”

The FBI contacted 11 people and interviewed 10, including Ramirez, as part of that background check but did not talk to Blasey, Kavanaugh or Swetnick, drawing a torrent of criticism that the bureau’s inquiry was shoddy. “The whole thing is a sham,” Sen. Tim Kaine, D-Va., said last week.

Wray insisted that the inquiry, handled by the FBI’s security division and the White House security office, followed procedure. Asked by Sen. Kamala Harris, D-Calif., Wray declined to say why Blasey and Kavanaugh were not questioned.

Harris also asked whether the FBI examined allegations that Kavanaugh lied to Congress during his testimony. “That’s not something I can discuss here,” Wray said.