Raleigh, N.C. — The owners of a Raleigh home that was raided by FBI agents on Wednesday night were taken into custody and charged Thursday.

According to paperwork obtained by WRAL News, Leonid and Tatyana Teyf, of 6510 New Market Way, were being detained by the Wake County Sheriff's Office.

In total, the couple was indicted on 29 combined charges.

John Patrick Cotter, a lifelong friend and business associate of the Leonid Teyf's, is named in a criminal complaint in connection with the raid. Authorities say he corruptly gave or promised a thing of value to a public official with intent to induce the public official to do an act in violation of his official duty.

Cotter had not been detained as of Thursday evening, but is expected to return for a preliminary hearing at an unspecified date in the future. 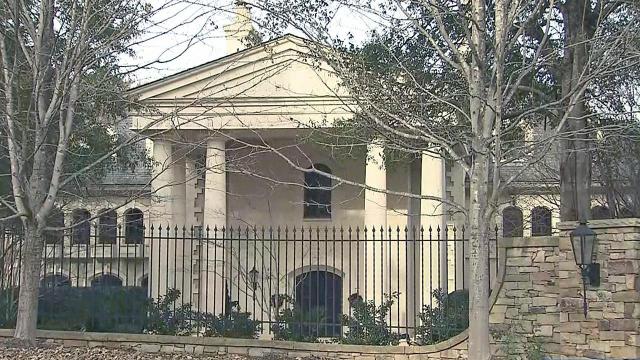 According to the complaint filed Thursday, the Teyfs hired a housekeeper from Russia, and the housekeeper, her husband and their son all lived in the Teyfs' multimillion-dollar north Raleigh mansion.

The housekeeper’s family moved out of the house after she lost her job, and after that, the son was no longer in the U.S. legally, according to an FBI affidavit supporting the charge against Cotter.

In February 2018, Leonid Teyf told a confidential source that he believed his wife had been involved in a romantic relationship with the housekeeper's son. Teyf told the informant that he wanted to pay someone to get the son to talk and then have the son overdose on drugs.

Teyf then said he wanted the son deported because, if he was back in Russia, “he would be buried already.”

Teyf went on to tell the informant that he wanted the son "kidnapped, taken into the woods, forced to admit to having sex with Tatyana Teyf on video then to be killed," the affidavit states.

In March 2017 and April 2018, Cotter met with agents with the Department of Homeland Security to persuade them to investigate the son for either a fraudulent marriage or firearms possession.

On May 23, 2018, Leonid Teyf and Cotter met with a DHS special agent at a restaurant in Raleigh. During that meeting, Cotter suggested that Teyf could provide a boat, vehicle or cash as an incentive to investigate. They also agreed to pay the special agent $25,000 for an "investigation that would result in the arrest and deportation" of the son.

Cotter then helped Teyf provide a $10,000 down payment, and once the son was deported, the agent would get an additional $15,000.

Teyf and Cotter also met with the special agent in July and August. At each meeting, the arrest and deportation of the son was discussed.

Each meeting was recorded on audio, video or both, the affidavit says.

The Tayfs filed for divorce last year. They were married in Russia in 2005.