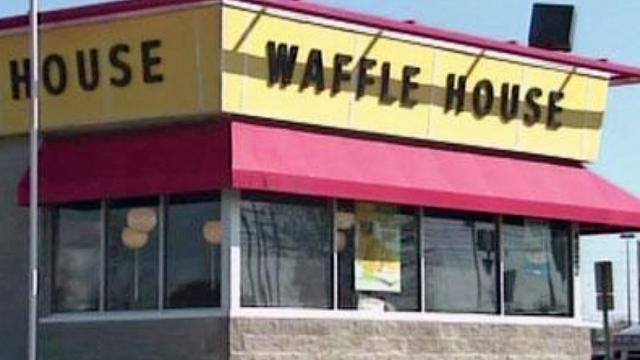 Fayetteville, N.C. — Someone opened fire at a Waffle House in Fayetteville Monday morning, but no one was injured in the shooting, police said.

A person in a dark-colored SUV fired four shots at the restaurant at 4520 Yadkin Road at about 3:30 a.m., police said. Two windows were shattered by the gunfire.

Seventeen people were inside the Waffle House at the time, police said.

Police spokesman Gavin MacRoberts said it was unclear whether the SUV was driving by on Yadkin Road or was in the parking lot when the shots were fired. He said authorities are looking into whether there was a disagreement between someone in the SUV and someone inside in the restaurant that prompted the attack.

Selwyn Facey was not afraid to bring his two small children to eat at the restaurant on Monday afternoon.

"I feel safe as anywhere else on planet earth. It's America. Pretty much everyone has a gun, so every once in a while, bullets are going to fly, and someone's going to get shot. What are you going to do about it?" Facey said.

Police say there is surveillance video of the shooting, but they were not ready to release it to the media yet.

In an unrelated Waffle House shooting, Johnson County authorities said a pregnant woman was injured Saturday morning after a man fired an AK-47 assault rifle into her rental car outside the chain restaurant on Industrial Drive in Selma.

Authorities said Phabien Darrell McClaude shot at the victim while she talked with the father of her unborn child, who was standing outside the car. When the shots rang out, the friend jumped into the car and the pregnant victim attempted to drive to the hospital. Her vehicle broke down on U.S. Highway 301, but she received another ride to the hospital for treatment of a cut on her hand, possibly due to flying glass.

McClaude, 23, of Godwin Street, was arrested Sunday evening and charged with two counts of assault with a deadly weapon with intent to kill, discharging a weapon into a vehicle and possession of a firearm by a felon.

Authorities believe the shooting was linked to an altercation several minutes earlier at JoCo Night Life Club on U.S. 301 involving McClaude and the father of the victim's unborn child. They are also investigating whether it is linked to a shooting at an apartment on AJ Lane outside of Selma around the same time.

McClaude was being held under a $170,000 bond in the Johnston County jail on Monday.