Fort Bragg, N.C. — At Freedom Memorial Park in Fayetteville, dozens of people turned out Monday to honor those who died in armed conflicts that date back to World War I.

The Fort Bragg community knows that freedom isn’t free. That's why Memorial Day is more than just a chance to cookout and head to the beach. 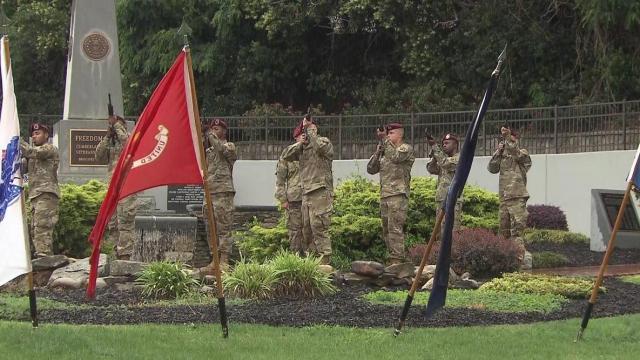 There are eight monuments in the park, with the latest one dedicated on Memorial Day.

It honors those who made the ultimate sacrifice since the war on terrorism began. The park is the brainchild of former Fayetteville City Ccouncilman Don Talbot. He says memorials like these help put the memorial back in Memorial Day.

"Because we have gotten away from it over the years, people just forget to take that moment to say thank you and to memorialize their own family," Talbot said.

Freedom Memorial Park is located at Hay and Robeson streets across from the Airborne and Special Operations Museum.

A light rain in Raleigh could not keep families away from the annual Memorial Day remembrance at Historic Oakwood Cemetery.

Families listened to the keynote address from Col. Baron Hignite before visiting the graves of loved ones buried in the field of honor.

"For some, today is just a day off, a day to get things done at home, maybe a three-day weekend, a day to go to the beach but I thank you today for taking your time which is so valuable to think about the men and women of our armed forces," Hignite said.

The ceremony at paid tribute to veterans, active duty service members, military families and, of course, those service members who made the ultimate sacrifice. The Raleigh Moravian Church Brass Band played Taps, and the Star-Spangled Banner and the Capital City Young Marines presented the colors.

Chief Master Sergeant Robert Bilodeau, United States Air Force, and his family visit Oakwood often – his father is buried there – but it's special on Memorial Day.

"Memorial Day has a higher significance when your family has served," Bilodeau said.

Once a year, the Bilodeaus meet with other families that have a fellow veteran buried near their father, sharing that special connection knowing the sacrifice of those who served.

"The unity and the comradery of the military service members is something you don't see in every job," he said.