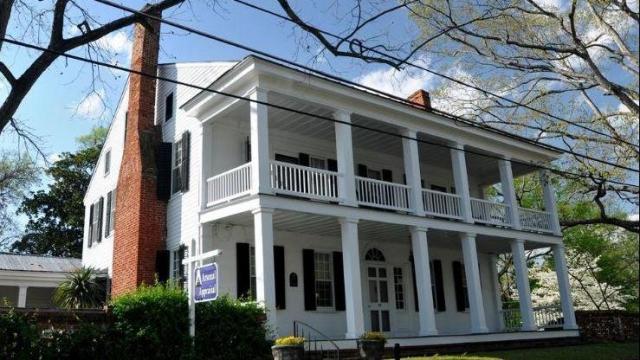 Her husband then married someone else, so Margaret is believed to be checking on her children and husband even after her death.

A history of the house says the ghost is that of Jesse Kyle, a post-Civil War resident who married into the original family.

The Cool Spring Tavern, built in 1788, has been rumored to host the ghost of North Carolina Gov. Richard Caswell. Caswell died in the building in November 1789.

According to the story, railroad employee Archer Matthews slipped and knocked himself out on the tracks. The next train came along and lopped his head off. Now his ghost wanders the dark tracks.

According to the story, some of Gen. William T. Sherman’s bummers, or straggling looters, murdered the family of a local Confederate officer.

The Revolutionary War-era house in Bladen County is where a group of ghost hunters once tried to contact the dead.

Out and About has ghostly experience at Asheville's Grove Park Inn

The theater, which opened in 1929, is reportedly home to several ghosts.

The most talked-about ghost is Dr. Bean, who practiced medicine in what are now the administrative offices. Dr. Bean may have committed suicide there, and his tall figure is frequently seen out of the corner of the eye.

In March 1865 Gen. Joseph Johnston and his men tried to keep Gen. William T. Sherman and his strong force from joining Gen. Ulysses S. Grant. The farmhouse was commandeered for use as a hospital.

The story behind the Oakwood Halloween House

You can read the full ghost stories on The Fayetteville Observer website.