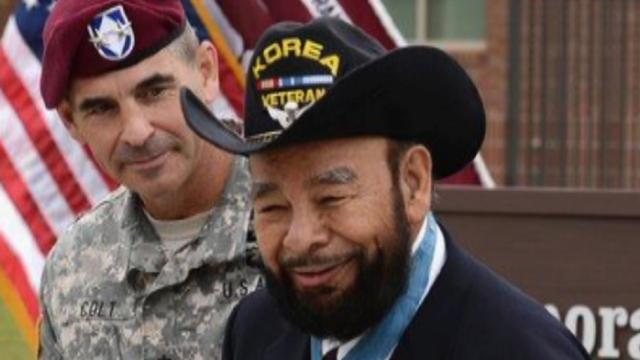 Fayetteville, N.C. — Korean War veteran and Medal of Honor recipient retired Cpl. Rodolfo (Rudy) Hernandez, who was the grand marshal of this year’s Fayetteville Veteran’s Day Parade, passed away on Saturday. He was 82.

He will be buried at the Sandhills State Veterans Cemetery in Spring Lake, Ray said. Funeral arrangements are being finalized.

Hernandez received the Medal of Honor – the military’s highest recognition for valor above and beyond the call of duty – from President Harry Truman in 1952 for killing six enemy fighters during a Korean War battle on May 31, 1951, according to the Congressional Medal of Honor Society.

Hernandez and other soldiers of Company G, 187th Airborne Regimental Combat Team were in foxholes near Wontong-ne, Korea, and as the rest of his platoon retreated after nearly running out of ammunition, Hernandez and his foxhole mate held their position and kept firing.

Hernandez suffered a shrapnel wound to his head.

When he finally left his position, Hernandez charged the enemy armed only with a grenade and a rifle with a fixed bayonet. It stopped the enemy advance and sparked a counterattack.

The morning after the attack, Hernandez was pronounced dead after being found lying among the bodies of the North Korean soldiers who had been killed by bayonet. When a soldier saw a slight movement of Hernandez's hand, medics began frantically trying to save his life.

Hernandez couldn't talk for months following his injuries and had to relearn to walk. Part of his body remained paralyzed.

He spent his post-war years working for Department of Veterans Affairs, retiring in 1980. He is survived by his wife and three children from a previous marriage.

In August, Fort Bragg's Warrior Transition Battalion rededicated its complex in his name.