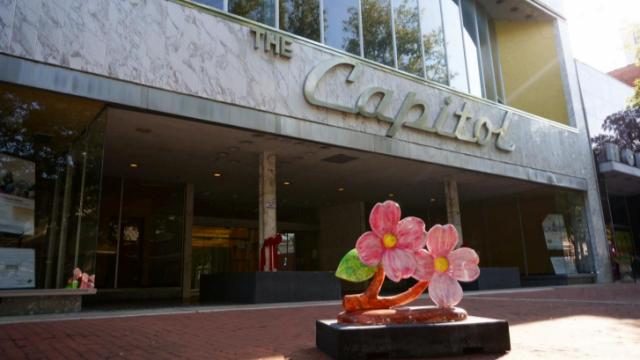 Fayetteville, N.C. — From the outside, the building looks much the same:  The former Capitol department store building, a longtime fixture on Hay Street in downtown Fayetteville.

But, on the inside, big changes have been underway as Fayetteville welcomes a much-needed new charter school.

Capitol Encore Academy officially opened its doors this week, becoming only the second charter school in Fayetteville. With classes offered from kindergarten through fifth grade, the school places an emphasis on arts education while teaching core academics.

It’s just the kind of curriculum Rhonda Merritt-Quador was hoping to find for her second grade daughter.

“Peyton loves music, dancing, theatre and art,” she says. “As a mom, I wanted to combine her passions with her education.”

It sure looks as though Capitol has all the right tools to feed the passions of its creative students. Designers took advantage of what was left behind when the former department store was converted into a family entertainment complex several years ago, a business that eventually folded. The bowling alley is now a stage area with theater seating. A former food court now serves as a large art studio.

Parents say they find the unique atmosphere inspiring. “I believe this environment will allow [my daughter] to think outside of the box and be an active player in her education,” says Merritt-Quador.

An outsider may find it puzzling that a school would look to locate in a downtown area. But the opening is part of an ongoing, successful revitalization of downtown Fayetteville.

Merritt-Quador says Capitol’s location was definitely a factor in her decision to enroll her child. “With the school being in Historic Downtown Fayetteville, I’m hoping the school will be the epicenter of cultural growth within Fayetteville,” she says.

School organizers hope to add grades in the coming years, but in the meantime, the Capitol Encore Academy gives another option to an area in critical need of more school options.

Jennifer is a mom of two and WRAL-TV assignment editor in Fayetteville. Her food obsession memoir, "Designated Fat Girl," came out in 2010. Read more about Jennifer and her book on her website. She writes about motherhood and family-friendly events in Fayetteville here on Go Ask Mom.