Fauci says Trump campaign should take down ad featuring him 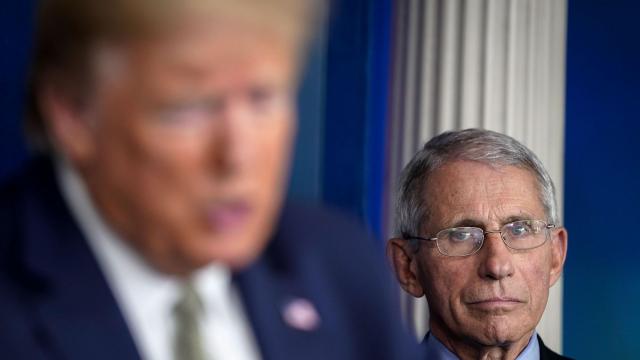 CNN — Dr. Anthony Fauci said Monday that the Trump campaign should take down the political advertisement that he's featured in, calling his presence in the spot "really unfortunate and really disappointing."

Fauci's latest comments come one day after he told CNN he did not consent to being featured in the Trump team's new advertisement and that his words were taken out of context.

"It's so clear that I'm not a political person," the nation's leading infectious disease expert told CNN's Jake Tapper on "The Lead."

"And I have never -- either directly or indirectly -- endorsed a political candidate. And to take a completely out of context statement and put it in which is obviously a political campaign ad, I thought was really very disappointing."

The Trump campaign released the new ad last week after the President was discharged from Walter Reed National Military Medical Center following treatment for Covid-19. The 30-second ad, which is airing in Michigan, touts Trump's personal experience with the virus and uses a quote from Fauci in an attempt to make it appear as if he is praising Trump's response.

"President Trump is recovering from the coronavirus, and so is America," the ad's narrator says. "Together we rose to meet the challenge, protecting our seniors, getting them life-saving drugs in record time, sparing no expense."

The ad then flashes to an interview with Fauci in which he says, "I can't imagine that anybody could be doing more."

But Fauci told CNN in a statement Sunday that "the comments attributed to me without my permission in the GOP campaign ad were taken out of context from a broad statement I made months ago about the efforts of federal public health officials."

In response to Fauci saying the ad took his words out of context, Trump campaign communications director Tim Murtaugh said, "These are Dr. Fauci's own words. The video is from a nationally broadcast television interview in which Dr. Fauci was praising the work of the Trump Administration. The words spoken are accurate, and directly from Dr. Fauci's mouth."

Asked Monday about the possibility of being featured in future Trump campaign ads, Fauci maintained, "That would be terrible."

"I hope they don't do that because that would be kind of playing a game that we don't want to play," he said.

The advertisement comes alongside an aggressive campaign push from President Donald Trump at a time when his reelection bid is trailing in national polls and in a number of key swing states with less than four weeks to go until Election Day.

And even as the White House physician has declined to say when the President's last negative test took place, the campaign has scheduled a slate of in-person rallies in the coming days.

"Put aside all of the issues of what political implications a rally has and just put that aside and look at it purely in the context of public health. We know that that is asking for trouble when you do that. We've seen that when you have situations of congregate settings, where there are a lot of people without masks, the data speak for themselves. It happens," he said.

"And now is even more so a worse time to do that because when you look at what's going on in the United States, it's really very troublesome."