Father: 'This is more than a home for my family' 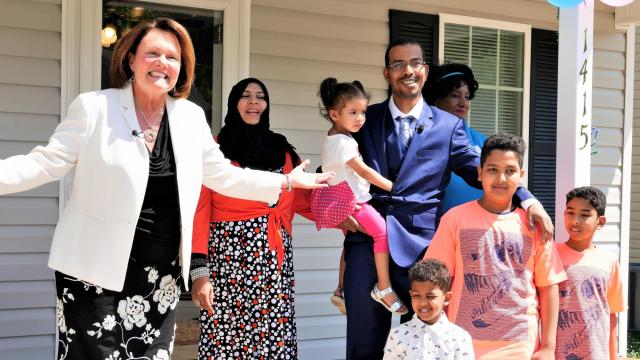 Maria Hanlin could barely contain her enthusiasm before a crowd of Habitat for Humanity staff and volunteers gathered May 11, 2018, at a tidy new home on Asher Downs Drive in Greensboro.

"What a beautiful morning," said Hanlin, executive director of Habitat for Humanity of Greater Greensboro. "We are here to dedicate the home of Abdelrhman Elbahi and Abir Mohammed. They have been on an amazing journey of many years to get to this day. It's a dream of coming to America, of becoming citizens, of economic security and home ownership, of education for their children and good health care."

"That dream, after many years, has come true, and today we celebrate you and thank God for bringing you to this day." 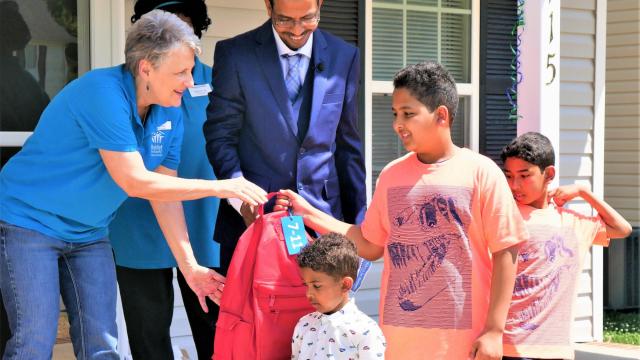 "This family really did have a rough journey here. They left an oppressive regime in Sudan and then went to Saudi Arabia, but weren't treated nicely as immigrants. So their dream was to come to America, to embrace all the freedoms afforded us. I'm very honored to have worked with you."

Abir, father of the family, nattily dressed in a dark suit and tie, spoke next.

"This has been an important journey for our family. This house would not be possible without people of the State Employees Credit Union as well as people from Wyndham Worldwide."

"This is more than a home for my family," he continued. "It is the future of my family. It has always been our dream to own a home in America. We came to America early 2013, and ever since then our dream was to own a house in this country."

Abir concluded with a note of pride and hope that is universal among parents everywhere; it brought laughter and applause from the crowd.

"Now that we have fulfilled this dream, the next dream is to raise my children in this house to become this country's next doctors and engineers."

The house is one of 104 being built across North Carolina as part of the State Employees Credit Union Foundation's Mountains-to-the-Sea Challenge to build at least one Habitat home in each of North Carolina's 100 counties. The SECU Foundation has put up $10 million for the program. Once the homeowner has assumed a zero-percent mortgage from SECU, the funds are returned to the affiliate so that another home can be built.

The Foundation is funded via a $1 per month maintenance fee paid by SECU account holders.

"This home and the 480 families we have placed in homes in Greensboro would not have been possible without our sponsors," Hanlin said. Habitat Greensboro also tries to fund one Habitat home internationally for every one that is built locally. That endeavor has resulted in 429 homes being built in other countries.

The house on Asher Downs Drive was originally built as a hospitality suite for the Wyndham Championship golf tournament. It was dismantled and rebuilt on its present site; this is the second Habitat home that Wyndham International, a hospitality company, has donated to the Greensboro Habitat affiliate.

"That is amazing," Hanlin said. "Recycling at its best!"

"Habitat believes from the bottom of our hearts that every person, every child, every family needs a home to grow and learn and fulfill their God-given potential." 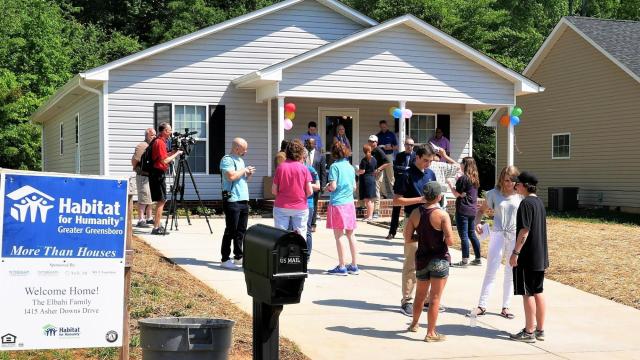