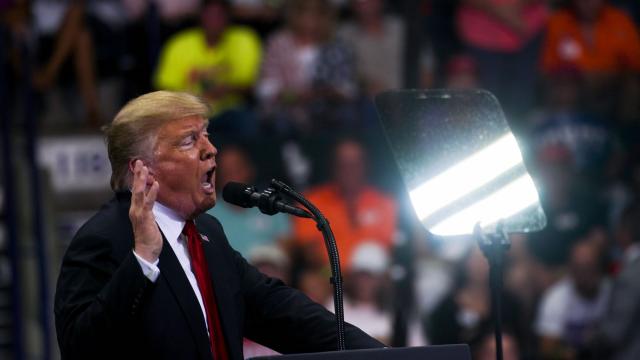 On Wednesday, minutes after President Donald Trump posted an incendiary campaign ad falsely accusing Democrats of flooding the country with murderous illegal immigrants, virulent racists on an online message board erupted in celebration.

“I love it. We should be making videos like this,” one said. Another approvingly compared the ad to “With Open Gates,” a viral 2015 video about the dangers of European immigration that drew praise from prominent neo-Nazis and white nationalists, and was broadly condemned by anti-hate groups.

These posts, which appeared on the politics forum of 4chan, an online message board known for hosting extreme speech and graphic imagery, were not a one-off. In recent weeks, as Trump and his allies have waged a fear-based campaign to drive Republican voters to the polls for the midterm elections Tuesday, far-right internet communities have been buoyed as their once-fringe views have been given oxygen by prominent Republicans.

These activists cheered when Trump suggested that Jewish billionaire George Soros could be secretly funding a caravan of Latin American migrants — a dog-whistle reference to an anti-Semitic conspiracy theory that has been advanced by neo-Nazis and white nationalists for years. They roared their approval when Trump began stirring up fears of angry, violent left-wing mobs, another far-right boogeyman. And they have found traces of their ideas in Trump’s rhetoric, including his concern for an obscure land rights conflict involving white farmers in South Africa and his references to asylum-seeking migrants as “invaders.”

“Most of these conspiracies are not new to us,” said Oren Segal, director of the Anti-Defamation League’s Center on Extremism. “I’ve seen white supremacists and extremists talk about these anti-Semitic and racist ideas for years. But it was always in the corner. Now, you don’t know where the mainstream starts and the fringe ends.”

Since the 2016 election, these far-right communities have entered into a sort of imagined dialogue with the president. They create and disseminate slogans and graphics, and celebrate when they show up in Trump’s Twitter feed days or weeks later. They carefully dissect his statements, looking for hints of their influence. And when they find those clues, they take them as evidence that Trump is “/ourguy/,” a label for people internet extremists believe share their views, but who are unable to say so directly in public.

“There’s this feedback loop between Donald Trump’s Twitter feed and right-wing extremist movements,” said Sophie Bjork-James, an assistant professor of anthropology at Vanderbilt University who has studied far-right extremism. “They’re not all supportive of Trump, but his language does give them ideas that then circulate online in extremist social media spaces.”

The White House press office did not respond to multiple requests for comment.

Right-wing extremists — a catchall category for a messy constellation of neo-Nazis, white nationalists, crypto-fascists, nihilists and attention-seeking trolls — vary widely in style and ideology. Some congregate out in the open, on forums like 4chan and Reddit as well as public platforms like Gab, the Twitter-like social network used by the suspect in the Pittsburgh synagogue shooting. Others communicate in private channels on Discord, a chat platform, or over encrypted messaging apps like Telegram or Wire. Some are ardent supporters of Trump, while others oppose him on the grounds that he is not extreme enough.

What they have in common is a feeling of empowerment — a sense that the boundaries of acceptable speech are widening in the Trump era, and a suspicion that when they talk, Trump, or those with access to him, may be listening. Even small phrases can set off speculation. Last month, when Trump tweeted an unfounded accusation that left-wing protesters outside the confirmation hearings for Justice Brett Kavanaugh were “paid for by Soros and others,” some extremists took it as evidence that the president shared their view of a global Jewish-led conspiracy led by Soros, a leading donor to many liberal causes.

“Trump has officially named the Jew,” wrote one user on 4chan. “Trump knows,” wrote another, who said that the “others” Trump referred to in his tweet might be a sly reference to other shadowy Jewish benefactors.

These extremists’ sense of influence is almost certainly exaggerated. Trump, who has Jewish family members including his daughter, has said nothing about Soros’ religion or a larger Jewish conspiracy. And it is unlikely that the president, who has said that he does not use a computer, is wading through obscure message boards in search of talking points.

But that hasn’t stopped those extremists from interpreting his words as a signal that the president shares their views.

It is difficult to quantify how many right-wing extremists exist in America — many operate anonymously or pseudonymously online, and few real-world gatherings take place. But some private channels for neo-Nazis and other extremist groups have thousands of members, and more mainstream right-wing spaces — such as a pro-Trump Reddit forum, r/the_donald, which has more than 600,000 members — have amplified extremist messages.

Last month, users on r/the_donald promoted a slogan — “jobs, not mobs.” They said the phrase, which has historical roots in right-wing fears of violence by anti-fascist protest groups, would make a good closing argument for Republicans in this year’s midterm elections.

“Jobs not mobs” appears to have taken off with help from Scott Adams, the “Dilbert” cartoonist and a self-styled communications guru who is popular with the pro-Trump internet crowd. Adams said on Twitter that the phrase was likely to be persuasive to voters because it rhymed, and that it was “brain glue plus framing and contrast.”

The slogan was then turned into an image meme — a split-screen photo showing busy factory workers in contrast with angry protesters — and posted to the r/the_donald forum, where it drew rave reviews from thousands of members. From there, it spread to prominent conservative commentators on Twitter and Fox News, who used it to stir fears of left-wing mob violence. And on Oct. 18, six days after #jobsnotmobs appeared on a right-wing Reddit forum, Trump tweeted it.

Since then, the phrase has become a Republican mantra. It has featured prominently in campaign ads, has been grafted onto T-shirts and legions of internet images, and has been chanted by crowds at rallies for Republican candidates.

Trump may not be consciously egging on these efforts. But experts in online extremism say that his reluctance to rein in the radical elements of his base — perhaps best expressed by his kid-gloves treatment of white nationalists after the deadly “Unite the Right” rally in Charlottesville, Virginia, last year — have created an opening for more extreme ideas to spread.

Joan Donovan, a researcher at the think tank Data & Society who studies right-wing extremism online, said the far right corners of the internet often serve as an ad hoc testing ground for political messages that move fringe ideas into the mainstream.

“They incubate online, in YouTube videos, articles, through influencers, and they slowly become divorced from their politicized roots,” Donovan said. Donovan cited the example of Lauren Southern, a far-right YouTube personality who led a successful campaign to gain mainstream traction with an exaggerated story about land being seized from white farmers in South Africa. The story, a long-running narrative among white nationalists, has been used to further racist fears of an impending “white genocide” at the hands of black South Africans.

Southern campaigned to place the story in right-wing media in the United States, making personal appeals to top conservative media figures. Eventually, Tucker Carlson, the Fox News commentator, covered the story in a segment, and Trump tweeted about the issue, mentioning Carlson and Fox News in the tweet.

The president’s surfacing of the white farmer issue did not escape the notice of the far right. On an episode this year of White Rabbit Radio, a podcast that promotes extremist views, an anonymous commentator said that Trump’s remarks had legitimized a decades-old, obscure issue for white nationalists.

“This was the province of Stormfront five, 10 years ago,” the commenter said, referring to a neo-Nazi internet forum. “Now, it is mainstream.”

The ability of online extremists to push, tailor and amplify political messages has turned them into a potent force in the age of internet politics, as candidates and elected officials look to what is popular online to shape their own messages.

“I don’t think Trump is setting the agenda here,” Donovan said. “He’s riding a wave of attention that is primarily being played out and happening online. He wouldn’t have the ability to launch these policies if there wasn’t a quorum of people online getting ready to back him up and push these ideas across multiple platforms.”

Even when Trump denounces extremism, many of his supporters online see it as a begrudging concession, rather than an expression of his true beliefs. Last weekend, as Trump spoke about the dangers of anti-Semitism in the wake of the mass shooting at the Tree of Life synagogue in Pittsburgh, internet bigots reassured one another that Trump was still on their side.

“He needs to spin this for the midterms,” one poster on 4chan wrote.

“He really is playing 5D chess,” wrote another.

Not every online activist has the goal of shaping Trump’s thinking on hot-button issues, of course. For some, just being noticed is the prize.

After Trump tweeted the “jobs, not mobs” meme, the creator of the image — a Reddit user who goes by the online pen name “Bryan Machiavelli” and who declined to be interviewed unless The New York Times paid him $200 an hour for his “memetic warfare consulting” services — wrote on Reddit that attention from the president was its own reward.

“I am so excited that I achieved a goal I set 2 years ago,” he wrote, “to have the president retweet a meme I made.”