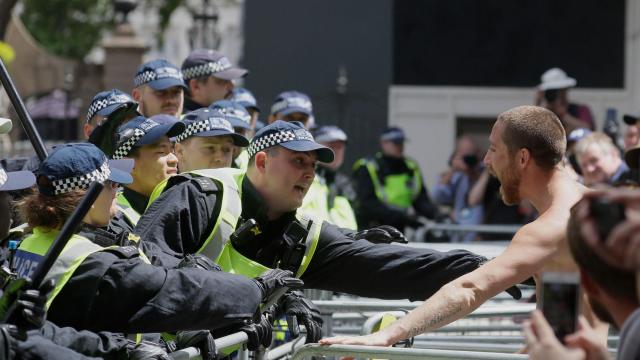 The offenses as of 9 p.m. included violent disorder, assault on officers, possession of an offensive weapon, possession of class A drugs, and drunken disorder, London's Metropolitan Police said in a tweet.

Far-right groups bombarded police with bottles and occasionally scuffled violently with officers as they staged a counter-protest in central London.

Police also arrested a 28-year-old man after an individual was photographed on Saturday apparently urinating on a memorial to a police officer killed while defending Parliament from a terrorist attack in 2017.

The man was arrested north of London "on suspicion of outraging public decency," police said.

Hundreds of mostly middle-aged white men, many shirtless or clutching beers, gathered in Parliament Square, where video showed a small number of right-wing protesters throwing objects at a line of police, some of whom responded with batons.

The groups, some of them chanting "England" during clashes, said the counter-protest was intended to "protect" statues around Parliament Square, including that of wartime prime minister Winston Churchill.

"Any perpetrators of violence or vandalism should expect to face the full force of the law. Violence towards our police officers will not be tolerated. Coronavirus remains a threat to us all. Go home to stop the spread of this virus & save lives," she said.

In Trafalgar Square, officers formed barriers between BLM and far-right groups, as authorities in the UK capital urged people to stay away from the protests, given the high likelihood of violence.

The statue of Churchill was boarded up, as were statues of Nelson Mandela and Mahatma Gandhi. One self-declared England fan and soccer hooligan confirmed to CNN last week that there were threats to pull down the Mandela statue.

The Mayor of London's office said: "The statues of Winston Churchill, Nelson Mandela and Mahatma Gandhi are being temporarily covered for their protection. All other statues in Parliament Square and Trafalgar Square remain under review and we will put protection in place should the need arise."

London's Metropolitan Police imposed a 5 p.m. (12 p.m. ET) limit on both the Black Lives Matter and right-wing protests in the UK's capital. They also imposed conditions on what route and area the protesters could use, to try to prevent the two groups clashing. Protests planned by Black Lives Matter and associated groups were to follow a planned route from Hyde Park to Trafalgar Square while protests by right-wing groups were to stay in Parliament Square and Whitehall, south of a police barrier.

In a statement released Friday, Met Police Commander Bas Javid said: "I absolutely understand why people want to make their voices heard -- there is a really strong depth of feeling out in the communities, but the Government direction is that we remain in a health pandemic and people are asked not to gather in large groups. By doing so, you are putting your own safety, and that of your family or friends at risk. We are asking you not to come to London, and let your voices be heard in other ways."

CNN has previously reported comments from Metropolitan Police Commissioner, Cressida Dick, that her forces had information that people were "intent on coming to cause violence and confrontation" at BLM marches across London this weekend.

"We can anticipate that some of them, whatever their political persuasion, are intent, some of them, are intent on having a confrontation with people from the Black Lives Matter movement. So my message is please just stay away this weekend," she said.

The UK's official Black Lives Matter group distanced itself from the protest that it had planned in central London on Saturday. "Please, people, our people, if you want to protest this weekend, do it in your ends," it tweeted, adding, "Our priority must be our safety -- please take care of yourselves and each other."

UK anti-racism charity Hope Not Hate had warned about the possibility of violence from "football hooligans" and far-right groups at protests this weekend. "While the hooligans claim that they are coming to London to "protect the war memorials" is also clear from the racist comments of many that they also hope to confront BLM and anti-fascists," Hope Not Hate wrote in a statement on Monday.

London Mayor Sadiq Khan urged residents to stay away from protests this weekend amid a "high" risk of violence in the city.

"I'd like to make a direct appeal to Londoners to urge you not to take to the streets to protest over the coming few days," Khan said in a video posted on social media.

"I stand with the millions of people around the world who are saying loud and clear that Black Lives Matter," he said, adding that the majority of protesters are peaceful. "However, I'm extremely concerned that further protests in central London could not only risk spreading Covid-19, but also lead to disorder, vandalism and violence."

"We know that extreme far-right groups, who openly advocate hatred and division, are planning counter protests.

"This means that the risk of disorder is high."

Khan said the counter-protests were clearly designed to provoke violence, and the best way to respond was to stay home and ignore them.

He said more than 60 police officers had already been injured while responding to previous demonstrations, adding that authorities will respond forcefully to those causing violence this time.

Meanwhile, thousands of people gathered in central Paris to protest against police brutality -- an issue symbolized in France by the 2016 death in custody of Adama Traoré, a young black man.

Saturday's protests were organized by 17 groups, including the family's "Truth for Adama" campaign.

Speaking ahead of the start of the march, Adama's sister Assa Traoré called for justice.

"We will fight that battle with all the French people. If you don't suffer discrimination, good for you, join us in the fight anyway."

In response, a small number of far-right protesters scaled a nearby building to unfurl banners reading: "Justice for the victims of anti-white racism."

While police did not formally ban Saturday's protests, gatherings of more than 10 people are not permitted under France's coronavirus laws.

Authorities on Friday urged businesses in Place de la République and Place de l'Opéra to close and to remove anything that could be used as a weapon.

A large crowd of protesters also gathered in Perth in Western Australia for a rally in support of the Black Lives Matters movement Saturday.

The rally, organized by First Nations Elders, aims to draw attention to and end violence against Aboriginal people in police custody and to end state sponsored racism.

Saturday's rally to support the Black Lives Matter movement in Sydney was made illegal by a court injunction over pandemic public health concerns.