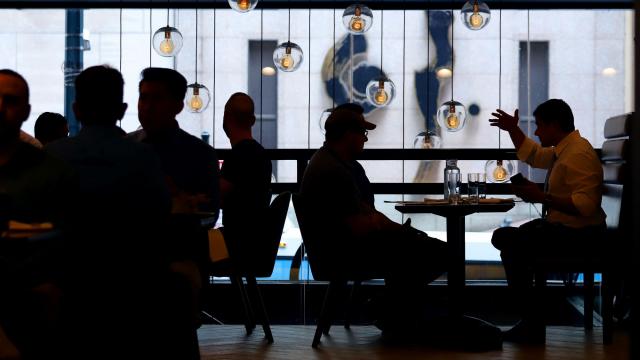 NEW YORK — The weekday lunch scene at Burger Heaven Kitchen & Bar was a crowded affair. Remixes by David Guetta, a French DJ, played while diners chatted throughout the modern-meets-mod, bi-level space on 49th Street, between Madison and Fifth avenues.

Sherry Sopin and Marlene Cohen were dining on the lower level, enjoying tuna salad sandwiches on multigrain bread and coffee. “Normally, we get egg white omelets, but today, we’re splurging because we’re so happy to be here,” Sopin said. The women have been Burger Heaven regulars for more than 20 years, but this visit was unexpected. “We were downtown and trying to figure out where to eat,” Cohen said. “We couldn’t think of anywhere that we wanted to go, so we came up here.”

Just then, Marguerite Loucas, 54, one of the owners, walked over and patted Sopin’s back. “Everything OK, ladies?” she asked.

“Our grandfather would have been so proud,” said Nicholas Cyprus, Loucas’ brother and another owner, while surveying the full restaurant.

That grandfather, Raphael Caviris, established the family business after immigrating to New York from the Greek island of Chios in 1916. At the time, he was a struggling artist and had hopes of a more prosperous life in the United States.

Caviris first opened self-service cafeterias on Broadway. In 1943, he opened Beef Burger, a sit-down restaurant, on 57th Street. In the early ‘50s, Beef Burger opened its second location on 49th Street, where Burger Heaven is today. Evans Cyprus, now 92, who is Raphael Caviris’ son-in-law and Loucas’ and Cyprus’ father, renamed the restaurant Burger Heaven when he joined the business in 1957.

“I didn’t like how Beef Burger sounded,” he said.

At one point, Burger Heaven had eight locations, and although there are still three today, all on the East Side, 49th Street is the mother ship, and the only one that has been renovated. Locals and office workers regard it as “their place.”

Evans Cyprus stops in almost daily to greet customers. His son, Nicholas, and grandson, Evans Cyprus Jr., 24, run the day-to-day operations with Dimitri Dellis, 60, who is married to Irene, Evans Cyprus’ daughter and Nicholas’ sister and the lone family member not working in the business.

Loucas is in frequently, too, to greet the regulars. “I still remember coming in here when I was 5 and cleaning menus,” she said.

This may be the original Burger Heaven, but it was recently remodeled to appeal to a new generation. The yellow Formica tables and blue pleather booths have been replaced with sleek wood tables, modern gray chairs, a long marble bar and overhanging globe lights, and there’s now an extensive wine and spirits list, a cocktail menu and a Thursday happy hour with a DJ. “We wanted to attract all generations — from children to people my grandfather’s age — and we felt that we needed an update,” the younger Evans Cyprus said.

One thing that hasn’t changed, however, is the food. The kitchen staff members, most of whom are longtime employees, grind the meat daily for the turkey and beef burgers and slice the potatoes by hand for the extra-crispy sweet potato and regular fries.

Dan Tamkin has been a customer for at least 20 years. He was in that day with three co-workers. “You feel the presence of the family. I feel lucky to work next door.”

Peter Schlosser had recently discovered the restaurant. He sat alone at the bar and finished his Greek salad with grilled chicken. “I just moved to the city from Chicago, and a co-worker told me about Burger Heaven,” he said. “I’ve been five times in the last two weeks and can’t wait to come back. It’s special.”