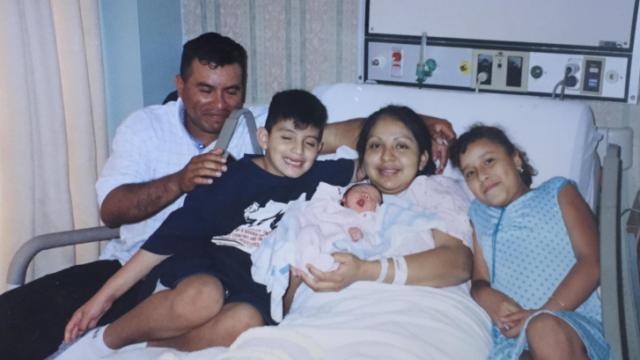 Raleigh, N.C. — The family of the man killed in Thursday's pedestrian bridge collapse at the north Raleigh campus of Wake Technical Community College says they are seeking answers from Skanska USA, the general contractor for the bridge that failed.

Jose Luis Rosales-Nava, 42, a father of three, died and four others were hurt when the bridge that connects a library under construction with nearby classroom buildings failed. His family said Saturday that he worked in construction for 17 years.

"He left behind three kids. (He was) the provider of our home," Rosales-Nava's wife, Sonia Lopez, said. (The kids) know they will never see him again, but they have to find a way to accept it. He is gone. I have to be strong for my kids."

Rosales-Nava lost a finger about a year ago while working for a different construction company, his family said. Rosales-Nava's wife is the sister of one of the other men injured in the incident, Omar Lopez.

Since the family spoke to WRAL, construction manager Skanska USA, has reached out to the family. The company said family contact information was just provided to them today. Sonia Lopez said the general manager of Skanska called at 5:33 p.m.

A manager at Central Concrete, a sub contractor, told WRAL Saturday that he visited all of the families at the hospital.

"All I'm asking is that I get help for what I will need," she said. "Nobody, absolutely nobody, has asked, 'Where is the funeral? What are you doing? How can we help?'"

The 140-foot center span of the bridge collapsed as a crew from Central Concrete of North Carolina, where Rosales-Nava worked, was pouring the concrete deck, officials said. The four others injured in the incident remained in the hospital Saturday. Lopez suffered a fractured spinal cord and underwent surgery after the collapse.

"How is it possible?" Gloria Rosales, Rosales-Nava's sister, said of the collapse. "How come they did not notice that something was wrong?"

Doris Candela learned her husband, Carlos Chavez, was among those hurt when she tried to call his cellphone Thursday morning and a police officer answered and told her Chavez was being taken to WakeMed.

It was only after she arrived at the hospital that Candela said she began to realize the magnitude of the incident.

"When all of the other guys' wives came in, I was like, 'Whoa, what happened?' This is not just an accident," she said Friday.

Chavez, whose foot was injured and will likely require surgery, was in shock for a while at WakeMed, his wife said.

A second bridge under construction on the campus collapsed Friday morning. No injuries were reported in that incident.

Skanska USA halted work at the site after the first collapse. Allen Jones, a vice president of Skanska USA, said Saturday he would not speculate about the cause of the collapse.

"There are folks out there. You can't not have an opinion, but I don't think it would be proper to speculate until the investigation is done," he said.

Paramedics arrived at the campus within six minutes of the collapse, but officials said getting to the injured took some time because of the construction in the area and the wooded terrain the bridge traversed.

Neal O'Briant, a spokesman for the state Department of Labor, said determining the cause of the collapses and whether any safety violations occurred could take months. Investigators will look at the design of the bridges, the materials used and the construction process, he said.