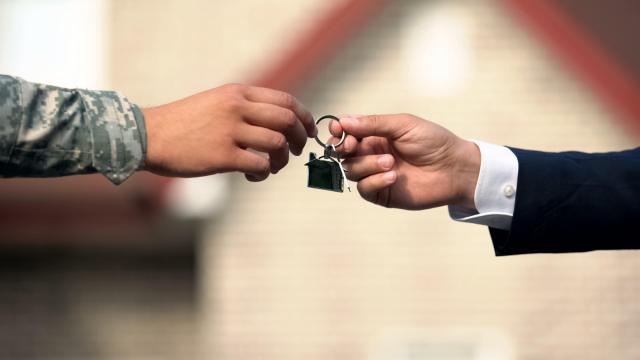 When Humberto Amador, a recent Raleigh transplant, got a job opportunity in North Carolina, he knew that leaving his beautiful home in Orlando would be hard for him and his family.

"My wife wasn't for the move to North Carolina. In fact, she stated that the only way she was going to move here was if I got her something identical to the house that we had in Florida," Amador recalled. "Our kids were also a little bit sensitive about the relocation."

Originally from Miami, Amador grew up in what he called a "very rough part of town" without a lot of options. In high school he started evaluating what he was going to do with his life and career. Realizing that his environment wasn't providing the education or resources he needed to succeed, he took it upon himself to charter his own path and joined the United States Marine Corps in 2005.

"My family was very poor. It made it difficult to guarantee school [college] after high school. I looked around at my siblings and friends and could easily see where their lives were going to go if they didn't do something to change their course," he said. "I decided to join the Marine Corps for two reasons — it was an opportunity to get out of my own backyard and see the world with a different lens, and it also gave me the opportunity to go to school."

When Amador returned home to Miami after his military service with experience, education and a new perspective, he realized it was no longer the place for him and moved to Tampa, and then Orlando, to study and work.

He built a family and climbed the career ladder along the way and was eventually recruited by a company with headquarters in Raleigh that asked Amador to relocate with his family. Amador is the director of project management operations at software company SolarWinds MSP, and is also months away from earning his PhD.

"We moved here in April of 2019 — Raleigh was a highly reputable place to grow and raise a family," he said. "We're enjoying it so far."

The journey to get here, and in a home of their own, however, was stressful.

Ahead of his job starting, Amador came to the Triangle to scope out the real estate market. He cold-called a realtor who showed him around 36 properties in two days. Fortunately, he found a home he knew would suit his family, was told he was pre-qualified for it, and was advised to go back to Florida to put his house on the market.

Within two weeks, Amador's Florida home was on track to be rented, but his realtor had some bad news, he actually hadn't met all of the pre-qualifications for the North Carolina home and the house couldn't be sold to him.

"The lender tried and tried and just could not qualify us. I'm thinking, we're about to be homeless because I rented my house in Florida with the expectation that I had a house to come to in North Carolina. It was very traumatic and stressful for myself and my family," Amador said of the uncertainty.

Amador met with a second lender who couldn't help either, and with three weeks left until the big move, Amador was getting nervous. He made peace with the fact that his family would have to rent upon their Raleigh arrival and then the house developer recommended a guy named Phil Jawny.

Jawny, a local financial expert and home lender with more than 20 years of experience, was able to approve a VA loan for the Amadors and secure the home that they'd wanted all along.

"This is my third official home I've purchased through some form of VA program, which I bought through Phil and his lending program. He was really helpful and extremely informative and confident too. He said, 'I'll get you qualified — the house will be ready in three weeks.' He got me a better loan, lowered the payments, and a better result," Amador said.

On moving day, the Amadors left Orlando at 2 a.m. and drove straight to Raleigh, and then spent four more hours in the car waiting for the house deed to be registered, until they finally got the keys to their home.

"My wife and I got the keys, went into the house, and passed out on the carpet in the bedroom without furniture," Amador laughed. "We thank God, and Phil, that we were able to get what we wanted. It was a gratifying feeling at the end."

Amador has leveraged the benefit of VA loans in the past, and a VA loan once again came through for him during his family's transition to Raleigh. A big proponent of this kind of loan, Amador said all military personnel should be taking advantage of it, and the financial opportunities and stability it can provide.

"I think if you're a veteran or an active service member, you should own a home. You don't have to buy an expensive one. You don't have to make a large down payment, you don't have to worry about high interest rates," he said. "It's my thought that if you fought or volunteered [for our country], you deserve some kind of repayment back for the time and service that you've done. A VA program is definitely something that all veterans should be taking advantage of."

As a kid growing up in a lower income neighborhood, Amador said home ownership has been huge for him. It's afforded him and his family peace of mind, but also financial stability because of the growing equity that's built into real estate investment. He said this kind of stability can make a significant difference in your life.

"My kids benefit from seeing their dad work as hard as I have, and I am. I've established a home for them that they know nobody's going to take away," Amador said. "It's an investment in our future and gives them a sense of stability knowing that we have roots in place."