Families Want Argentine Submarine Salvaged, but It Would Be Costly 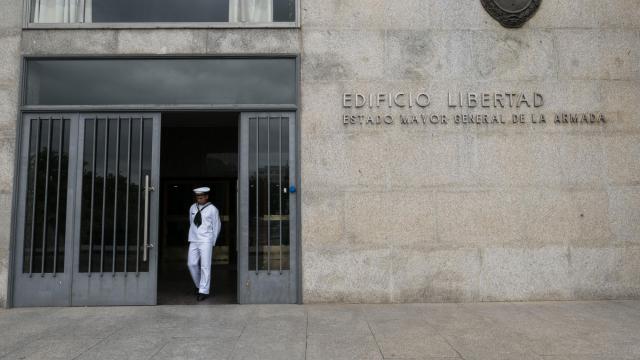 MAR DEL PLATA, Argentina — An Argentine submarine found deep on the ocean floor a year after it vanished with 44 people on board may rest there despite pleas from family members of the crew, who hope for a salvage operation that experts say would be costly and unlikely to yield new information.

Experts say the salvage operation appears to be feasible. But the financially struggling administration of President Mauricio Macri is not eager to pay for it despite pressure from families who want to recover the bodies of their loved ones.

For now, the only official in a position to order the vessel to be lifted quickly does not seem in a hurry to do so.

Marta Yáñez, the federal judge who is in charge of the investigation into the sinking of the submarine, the San Juan, is working with experts to review 67,000 photographs and videos of the submarine and its surroundings to determine what exactly happened to the vessel.

But it is unclear how long the review could take, she said.

Those images are to be provided by the end of the month by Ocean Infinity, the Houston-based company that found the San Juan a week ago. If they don’t provide a clear explanation and if it appears her investigation would be helped by studying the sub itself, Yáñez could order a feasibility study to find if the San Juan could be lifted from the seabed.

The judge has made clear she would order it pulled up only if it helped the investigation, not for any other reason.

“We’re all going to have to be patient,” said Yáñez in a phone interview from her courthouse in Caleta Olivia in the southern province of Santa Cruz.

Among the relatives of the submarine’s crew members, who have been waiting more than a year for news of their loved ones, patience is in short supply.

“The judge is very slow,” complained Natalia Toconás, 33, whose brother, Mario Armando Toconás, was aboard the San Juan. “It’s going to be up to us to pressure her to act.” The demand for the vessel’s salvage is a new chapter in the families’ long battle with officials for answers.

Many family members believe the Argentine government would have never hired Ocean Infinity, promising a $7.5 million payout if the submarine was found, if it had not been for the pressure they exerted, including camping outside the presidential palace in Buenos Aires for almost two months.

“If you don’t fight, no one does anything for you,” explained Alejandra Aguilera, 43, who is also a sister of Mario Armando Toconás. “Now we are going after the judge.”

Some family members have filmed a video calling on Yáñez to order the lifting of the San Juan, which they plan to release once she receives the images from Ocean Infinity.

Mirta Laz, 70, the mother of another crew member, Alberto Sánchez, was one of approximately two dozen family members who gathered this past week outside the naval base in Mar del Plata, a coastal city that was the base of the San Juan, to demand that the submarine be lifted.

“This is just getting started,” she said. “We finally know where it is. We need to go get it.”

Not all family members agree.

Luis Tagliapietra, who is the father of Alejandro Tagliapietra, was aboard the Ocean Infinity-operated search vessel as one of four auditors representing family members when the San Juan was found.

Running such a huge operation to pull up the submarine made no sense to him, he said.

“He was a sailor, he loved the sea,” Tagliapietra said of his son.

Defense Minister Oscar Aguad is also moving to tamp down expectations of a salvage operation, telling the Clarín newspaper that because of the depth of almost 3,000 feet and “where it is located, it is a technologically impossible mission.”

A salvage operation would not be simple or cheap, but there’s no reason to believe it couldn’t be done. Whether it is worthwhile though is another matter, they said.

“There are many operations that were perceived to be close to impossible” before they were carried out successfully, said Richard Janssen, managing director of SMIT Salvage, a subsidiary of the Dutch company Boskalis.

SMIT was one of the two companies responsible for raising the Kursk, a Russian nuclear-powered submarine that sank in the Barents Sea in August 2000 with 118 crew members aboard.

That submarine was 380 feet below the surface of the water, compared with almost 3,000 feet for the San Juan, but it was also eight times larger.

While the Kursk’s raising is often mentioned as an example of what a San Juan salvage operation might resemble, efforts to salvage wrecks from deeper depths give a better sense of the chances of the Argentine submarine’s recovery.

SMIT, for example, recovered the Japanese vessel Ehime Maru in one piece from a depth of around 2,000 feet off the Hawaiian coast in 2001.

Considering how much technology has improved since then, going an additional 1,000 feet down to reach the San Juan should not be seen as prohibitive, as that depth is nothing out of the ordinary in oil and gas exploration, Janssen said.

Also, the San Juan would hardly be the deepest salvage ever undertaken. The CIA — with the help of billionaire Howard Hughes — carried out a Cold War-era operation to recover parts from a Soviet submarine that in 1968 sunk three miles deep in the Pacific.

Stewart Little, who runs the Submarine Rescue Consultancy and worked with submarines for more than 30 years in the British Royal Navy, said technical issues were not the problem.

“Is it feasible?” Little said. “Yes. Is it too deep? No. It’s just the financing that would be an issue.”

Although the operation’s potential cost is difficult to assess without detailed information about the seabed and the state of the submarine, Little estimated that any salvage effort would have to start with a budget of about $100 million.

The real question that must be answered before an operation is begun, experts said, is why.

“Considering the San Juan imploded, there may not be much in the way of remains inside and even if there are, it likely won’t be all of them,” said Neil Hopkins, who worked at the British Defense Ministry for 30 years as a civil engineer specializing in submarine design and construction. He now runs Sonistics, a company that specializes in submarine rescues.

If the submarine is raised, he said, “Do you say to 44 families, we can identify 14 of them but not the other 30?” One reason to spend money salvaging the vessel would be to get information to prevent future accidents, but considering the age of the San Juan, within five years that information would not be relevant to any other submarine in operation, and the whole effort would be “an academic exercise with no practical value,” Little said.

As an alternative to salvaging, the Argentine navy could designate the submarine a grave and come up with a plan to take the families to the site once a year so they could pay their respects, Hopkins suggested.