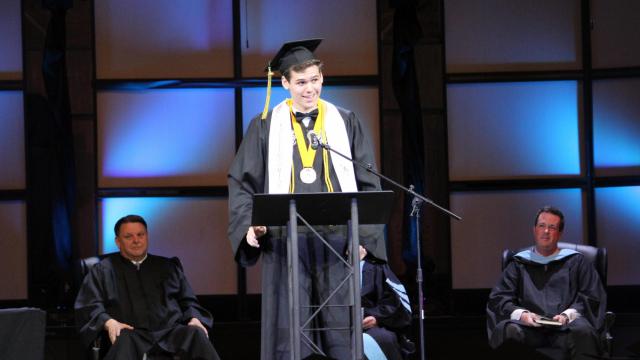 This article was written for our sponsor, Grace Christian School.

The Triangle has long boasted a strong reputation for its academics, and both private and public schools in the area consistently rank as some of the top institutions available both locally and nationally.

While Raleigh and Durham are educational hotspots, larger cities and quality schools aren't mutually exclusive. For parents who want to raise their children in smaller towns without sacrificing the quality of education, Sanford's Grace Christian School checks off all the boxes.

Accredited by two separate agencies, the private school has made a splash in the academic scene, and parents have taken notice — especially those looking to escape the hustle and bustle of the city.

Dale Backus and his family had previously lived in the Cary and Apex area, where he founded several startups like Five Point Productions, SmallHD and OhSnap. As his children started to get older and the cost of living in the area started to increase, he and his wife sought out a home that offered more peace and quiet.

"I've always wanted to live in the country and have a big piece of land. But we have kids, and so one of the concerns about moving from a suburban area to a more rural area was the schools. Especially in Wake County, the schools there are quite good, generally speaking, but then you move out into the country and options are much more limited," said Backus. "We started researching pretty early on and found Grace Christian. We toured it, and you could tell that they had a genuine care for the children, their education and the programs that they run. You could feel that you were going to get the attention for your kids that you want."

While Backus's kids just recently started at Grace Christian, he's already been pleased with the experience the school offers — especially after coming from the academic environment in Wake County.

Escaping the city for a quieter lifestyle seems to be a common thread for parents at Grace.

Jen Blodgett was born and raised in Sanford, but left her small-town roots to live in Raleigh. While there were plenty of perks to living in a city, Blodgett found herself missing the small-town comforts she'd grown accustomed to. As her kids started to get older, she knew she wanted to raise them in a similar environment.

"We were in a really great public school in Raleigh, but I just never got Grace out of my head. When you can drop your kids off at school and know that they are safe and in a good environment, it means a lot — not that I didn't feel like they were safe at public school, but it's just a different feeling of community and everybody has their best interests in mind," said Blodgett. "If something was off, I feel like I'd have at least two phone calls from random people letting me know. The teachers go above and beyond to make us feel informed, and they use an app or a website where I can look at every single assignment and grade. I feel like I'm as involved as I can be without actually being in the classroom with them."

While many people may assume the attention and quality of a private school is out of their budget, Grace Christian is, in Blodgett's opinion, an option that won't break the bank.

For other parents, that ease and openness in communication is what sets Grace apart from other options.

It's not just a top-tier education Grace offers — the school also hosts a wide variety of extracurriculars. Cruz's son is involved with the cross country and basketball teams, and as his other children get older, they also plan on trying out for a few of the school's athletic teams.

For each parent, the Grace experience has exceeded their expectations in academics and beyond. Backus in particular has been impressed with the contrast between his experience with the school compared to public schools.

"At the public schools, the class size is bigger and you have to follow a pretty average pace. At Grace, they actually have a more advanced curriculum, so the kids are learning at a faster pace. They do a good job at focusing on the academics, and they have a great style of hands-on learning," said Backus. "And the classrooms themselves are amazing — you go into them and you feel like you're in a movie or something. It's not some sterile metal chair, metal desk classroom kind of thing. It's almost a fantastical, kindergarten classroom, where there are things to do everywhere you look."

Thanks to the smaller student body size, teachers are also able to spend more one-on-one time with students and identify areas of strength or struggle. Additionally, since the school is private they have more flexibility in designing their programs and budget.

For example, in the midst of COVID-19, the school has been able to curate a virtual program for at-home students that includes them in the live classroom setting. Each student has a laptop that's connected to cameras in their classroom, allowing them to participate in real time.

Even though not all students are able to participate in person, the school's faculty has taken care to preserve the community and make sure everyone feels included and cared for. That emphasis on community branches out from Grace to the Sanford community at-large, making it an ideal fit for students and parents alike.

This article was written for our sponsor, Grace Christian School.