Falcon Heavy, in a Roar of Thunder, Carries SpaceX’s Ambition Into Orbit 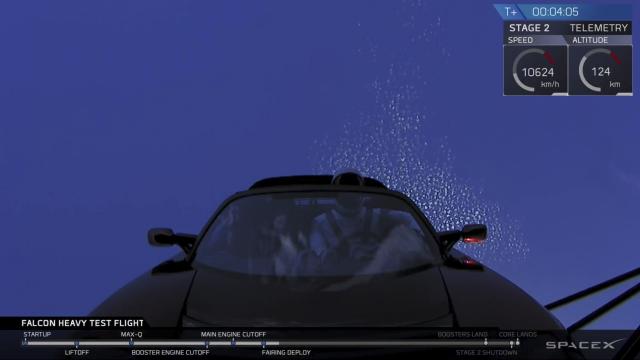 KENNEDY SPACE CENTER, Fla. — From the same pad where NASA launched rockets that carried astronauts to the moon, a big, new U.S. rocket arced into space Tuesday. But this time, NASA was not involved. The rocket, the Falcon Heavy, was built by SpaceX, the company founded and run by billionaire entrepreneur Elon Musk.

“It seems surreal to me,” Musk said during a news conference after the launch.

The launch of this turbocharged version of the workhorse Falcon 9 rocket, which has been carrying cargo to space for years, marks an important milestone in spaceflight, the first time a rocket this powerful has been sent into space by a private company rather than a government space agency.

The rocket carried a playful payload: Musk’s red Roadster, an electric sports car built by his other company, Tesla. Strapped inside the car is a mannequin wearing one of SpaceX’s spacesuits. They are expected to orbit the sun for hundreds of millions of years.

The success gives SpaceX momentum to begin developing even larger rockets, which could help fulfill Musk’s dream of sending people to Mars. To do that, he has described a new-generation rocket called BFR (the B stands for big; the R for rocket) that might be ready to launch in the mid-2020s.

The near-flawless performance of the Heavy on Tuesday “gives me a lot of confidence we can make the BFR design work,” Musk said.

He added that he hoped the launch would encourage other companies and other countries to aim for more ambitious goals in space.

“We want a new space race,” he said. “Races are exciting.”

Musk’s visions include humans living both on Earth and Mars. He’s part of a new generation of entrepreneurial space pioneers that includes Jeff Bezos, the founder of Amazon, who has said one of the goals driving his rocket company, Blue Origin, is the prospect of millions of people living in space. Planetary Resources, a U.S. company with a large investment from Luxembourg, hopes to mine asteroids for profit. Moon Express, based in Florida, sees a business in providing regular transportation to and from the moon.

For now, the Heavy will enable SpaceX to compete for contracts to launch larger spy satellites, and some experts in spaceflight are encouraging NASA to use private rockets like the Heavy instead of the gigantic and more expensive rocket, the Space Launch System, that is currently being developed in part to take astronauts back to the moon.

“It basically gives them another tool in their toolbox for accomplishing the space community’s goals,” said Phil Larson, an assistant dean at the University of Colorado’s engineering school who previously worked as a senior manager of communications and corporate projects at SpaceX.

Although delayed by high-altitude winds, the countdown proceeded smoothly, without any of the glitches that have bedeviled other maiden launches of new rockets.

The Heavy roared to life, a plume of smoke and steam shooting sideways from the launchpad. It rose from the pad, with an impossibly bright glare of 27 engines beneath it.

About 15 seconds later, a thunderous roar, traveling at the speed of sound, rolled over the spectators.

Just over three minutes after it blasted off, the most suspenseful part of the flight was over, as the boosters dropped off and the second stage continued into Earth orbit.

Some eight minutes after launch, a pair of sonic booms rocked the area as the two side boosters set down in near synchrony on two landing pads at Cape Canaveral. In the past few years, SpaceX has figured out how to routinely bring a booster stage back in one piece to fly again on future flights.

The one blemish on the mission was that the center booster, which was to set down on a floating platform in the Atlantic, slammed into the water instead, because some of the engines failed to ignite for the final landing burn.

Once in orbit, the rocket sent back video of the spacesuit-wearing mannequin in the car with a hand on the steering wheel. On the dashboard were the words “Don’t Panic,” a nod to Douglas Adams’ book, “The Hitchhiker’s Guide to the Galaxy.”

The spacecraft journeyed through Earth’s Van Allen radiation belt. About seven hours after the rocket took off, Musk announced that a third and final burn had put his sports car on an elliptical orbit away from Earth and around the sun that extends beyond Mars’ orbit. Since 2010, the company has been sending the smaller Falcon 9 rocket into orbit, deploying satellites and carrying cargo to crews aboard the International Space Station. The company has disrupted the global launch business with its lower prices and reusable boosters.

The Falcon Heavy is capable of lifting 140,000 pounds to low-Earth orbit, more than any other rocket today. Because all three boosters are to be recovered to fly again, a Falcon Heavy launch costs not much more than one by the company’s existing rocket, Musk said. SpaceX lists a price of $90 million for a Falcon Heavy flight, compared with $62 million for one by Falcon 9, a bargain in the context of spaceflight.

Musk estimated that his company had spent more than half a billion dollars on Falcon Heavy and said that the program was almost canceled three times.

However, the market for the Heavy is smaller than what Musk envisioned when he announced development of the rocket in 2011. Back then, he expected that SpaceX’s launches would be evenly split between Falcon 9s and Heavies.

But the development of the Heavy took years longer than anticipated — the central booster had to be redesigned to withstand the stresses of the powerful side boosters — and with advances in miniaturization, the trend is toward smaller satellites. SpaceX also boosted the capability of the Falcon 9, which now can launch many of the payloads that would have originally required a Heavy.

In addition to its central booster, the Falcon Heavy was equipped with two additional side boosters that essentially tripled its power at liftoff. While the Heavy uses many of the same components as the Falcon 9, Musk had cautioned that failures during a test flight would not be surprising. In particular, he worried about complex buffeting of air flowing past the boosters, which is difficult to predict even with the most sophisticated computer simulations.

The success of the Heavy could quell criticism that followed SpaceX’s first launch of the year — a Falcon 9 rocket that carried a highly classified payload code-named “Zuma,” on Jan. 7. A day after the launch, there were reports that Zuma had fallen back to Earth. SpaceX officials vociferously asserted that the Falcon 9 performed as expected, suggesting that blame for anything that went wrong should fall on Northrop Grumman, which built Zuma.

In the past year, SpaceX has tabled many of the plans for future development of the Heavy. The company had intended to use the rocket to launch one of SpaceX’s capsules, known as the Dragon, without people, on a mission to land on Mars. That was scrapped last summer.

Last year, Musk also said two space tourists would be launched by a Falcon Heavy on an around-the-moon trip this year. On Monday, he said that for now the company had no immediate plans to make the improvements needed before putting people aboard.

Instead, SpaceX is focusing its efforts on the BFR. It would be a two-stage rocket: a powerful booster to provide lift out of Earth’s gravity and then a spaceship on top for interplanetary missions. The full vehicle would not be ready until the 2020s, but Musk said he had “aspirational” hopes to begin short hopper tests of the spaceship portion next year.